‘Hi Mumsy, I’m home… it’s 6am!’ Son, 18, leaves hilarious Ring doorbell videos for his mother after missing his 9pm curfew – but insists he’s ‘not drunk at all’ as he stumbles inside

This is the hilarious moment a teenager arrived home from a marathon drinking session at 6am in the morning – and apologised to his mother via her doorbell camera for missing his 9pm curfew.

Josh Draper, 18, from Leigh, Greater Manchester, went out for a few drinks one Saturday last month and was told by his mother Suzi to be home in decent time to avoid being hungover the day before starting a new job.

But what started out as an innocent couple of post-match pints in a nearby pub with friends descended into a raucous all-nighter, involving visits to nightclubs in neighbouring towns and cities.

The 18-year-old, who planned to be home by 9pm, instead rolled in nine hours later at 5.56am waving at the Ring camera confessing he was ‘a couple of hours late’ but ‘wasn’t drunk at all’.

Hilarious footage from 17 July then shows the legal assistant, wearing a polo shirt, jeans and trainers, informing her that he was off to bed and that she ‘could wake him up at 3pm’. 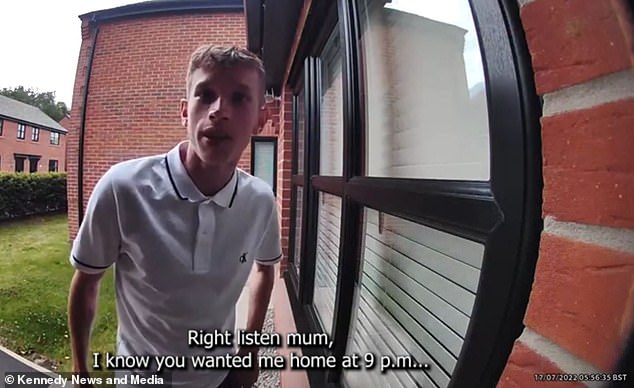 Josh Draper, 18, from Leigh, Greater Manchester, went out for a few drinks one Saturday last month and rocked up home at 5:46am in spite of promising his mother to be home by 9pm 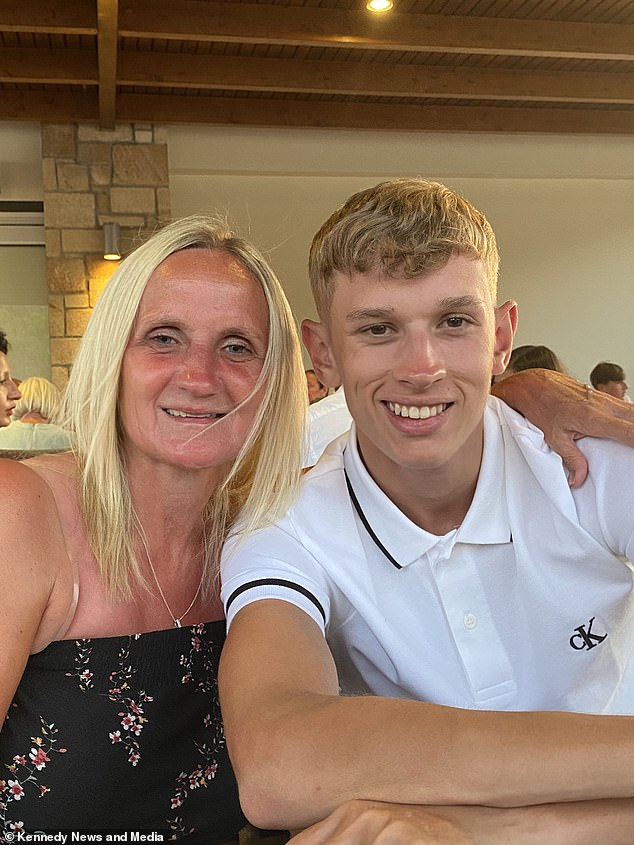 Suzi Draper, left, wanted her son to be home in decent time to avoid being hungover the day before starting a new job

Revealing his night out began with a curfew by his mother, Josh explained: ‘My mum had said, “Listen Josh, you’re starting a new job on Monday, so be home for 9pm. I don’t want you being hungover the day before you start your new job”.

‘I said, “yeah that’s fine”. I had my one pint and as I was leaving at 7 o’clock to go home early my mate texted me saying he was driving past and did I want to go for a couple of drinks.

‘I thought “I’ve got a couple of hours to burn yet so yeah, go on then” – we ended up there until midnight.’

He said: ‘I thought “I’ll call this a day now. I should’ve been home three hours ago and my mum’s going to kill me”, then the others suggested we get a taxi to Level in Bolton. 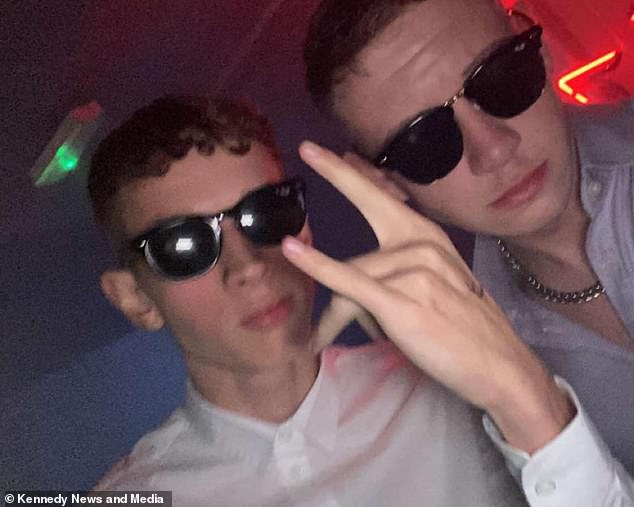 What started out as an innocent couple of post-match pints in a nearby pub with friends for Josh descended into a raucous all-nighter, involving visits to nightclubs in neighbouring towns and cities

‘I said “absolutely no chance”, but I was outvoted, so obviously I had to go with them. Then it was Cargo in the Printworks until 5am.’

Josh confessed: ‘I thought at one point that if I was already six hours late then I might as well be really late.

In the doorbell footage, Josh can be heard saying: ‘Hello. Right. Listen, Mum – I know you wanted me home at 9pm but it’s currently 5.56 in the morning, so I’m a couple of hours late. 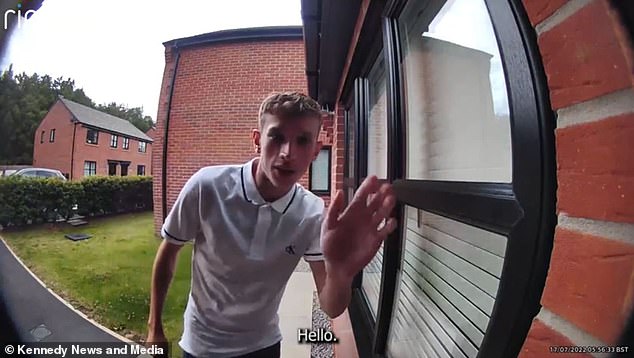 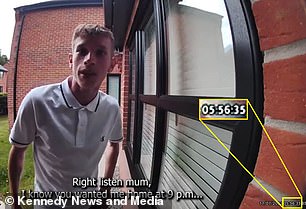 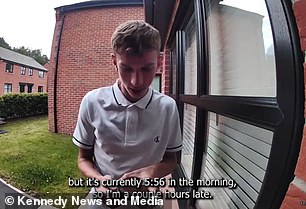 The camera’s timestamp revealed it was 5:56am when Josh eventually made it home after a night of drinking – and he confessed he realised he was ‘a couple hours late’

Despite his best efforts of getting a lie-in, Josh was woken by Suzi at 9am to go and take two-year-old cockapoo Colin out for a walk.

Josh said: ‘I woke up the next morning with no memory of it, and then thought my mum was going to kill me but she was just laughing.

‘She was saying how daft I am, and my dad thought it was hilarious. 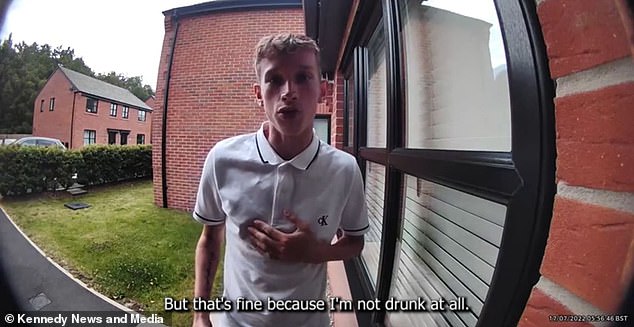 Despite coming home in the morning from a night of drinking, the 18-year-old assure his mother he was ‘not drunk at all’ 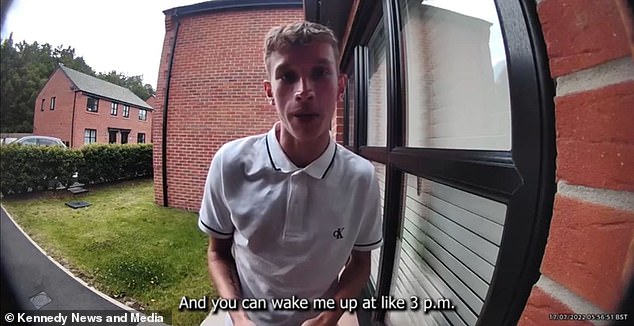 The teen ended up his speech by asking his mother to wake him up at 3pm, but she still woke up at 9am

Josh said the doorbell is a good laugh for his parents Suzi, 48, and 46-year-old Roy to look through over breakfast on Sunday mornings.

Not only that, but it’s a good way of letting them know he’s home safely.

The following weekend, Josh made use of the doorbell cam again to let “Mumsy” know he was home at 4.30am, quipping he was ‘quite early’ before turning the key in the door and clambering inside.

In the footage Josh said: ‘Hiya Mumsy, I’m home. It’s half four in the morning, so I’m quite early. 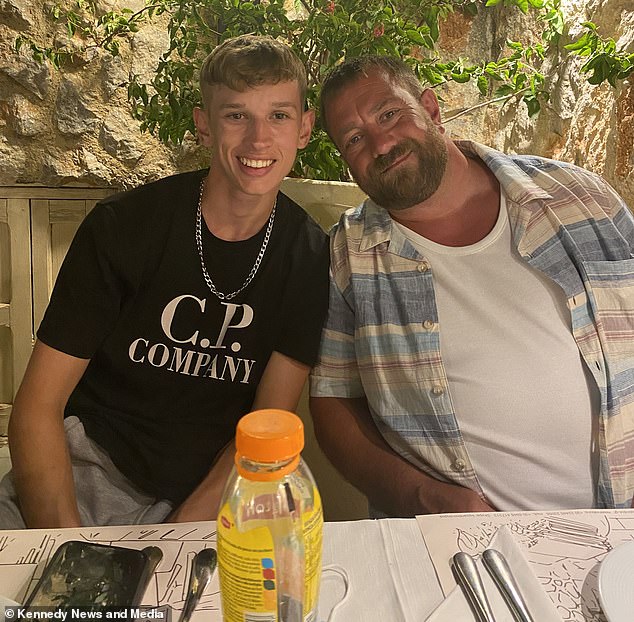 Josh said the doorbell is a good laugh for his parents Suzi, 48, and 46-year-old Roy to look through over breakfast on Sunday mornings (pictured, Roy)

Josh explained: ‘It’s the best purchase my mum’s ever made, it’s brilliant. I always leave a little message now whenever I come in from a night out.

‘If they’re having breakfast on Sunday they’ll jump on the Ring app and see if I’ve left them anything about what I’ve been up to, I think it’s hilarious.

‘It’s a great thing, especially for people my age who are coming home from nights out and might not have been able to get hold of their parents. 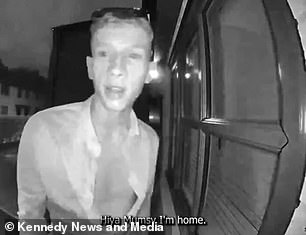 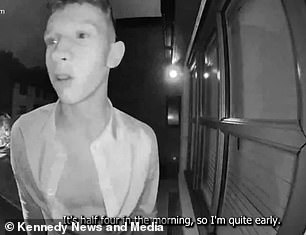 On another instance, Josh got home after another night of drinking, with his shirt half open, and called his mother ‘Mumsy’ 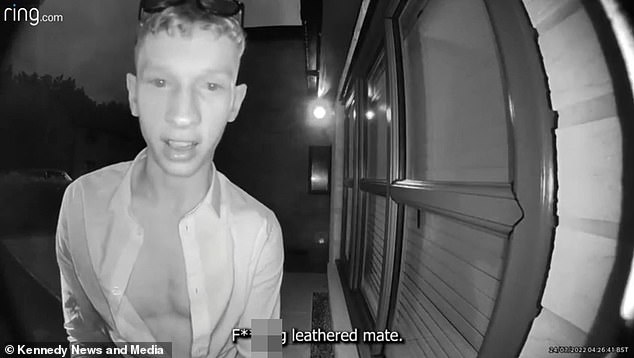 ‘Parents could be up until six in the morning worried sick, so if they get a notification on their phone saying their son or daughter came home at a particular time then it’s great.

‘It’s a really useful thing to have on your door.

‘I think it’s really important to be honest. I’d recommend it for people my age living with their parents – it just gives you a laugh in the morning when you feel like crap.

‘It gives you something to look back on and think ‘that night was worth it’ – although Mum did wake me up at 9am to walk the dog.’ 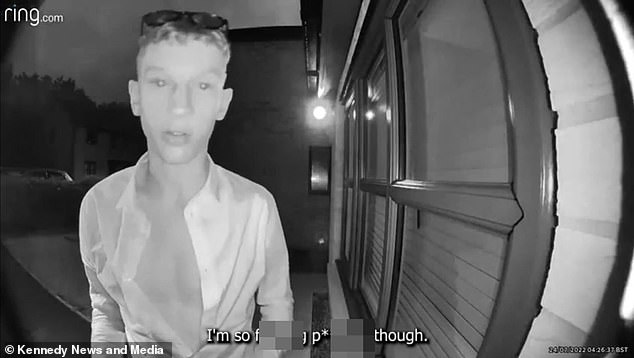