Follow
Home » Lifestyle » Ten years ago, the world was treated to the most insane party movie ever made

Ten years ago, the world was treated to the most insane party movie ever made

Plenty of fine films have been released over the last decade, including great works of art that will live long in the annals of cinema history. But no matter how much you enjoyed The Shape of Water, felt moved by Moonlight or sobbed openly during Manchester by the Sea, none of them delivered a viewing experience quite like Project X.

Released in 2012, the 88-minute film was a celebration of wayward house parties, out-of-control teens and what it means to seize the moment. It also starred Miles Teller, one of the biggest movie stars in the world right now, before anyone really knew who he was. 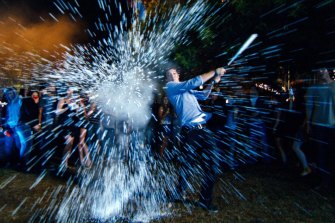 Before he was Rooster, Miles Teller was getting loose in Project X. The legendary party film turns 10 this year.

The plot was thin and familiar, but it didn’t matter. Desperate to boost their street cred, high schoolers Costa (Oliver Cooper) and J.B. (Jonathan Daniel Brown) plan to throw a birthday party for their friend Thomas (Thomas Mann).

Thomas’ parents are away, so they use his house, and, naturally, things escalate. What begins as a small gathering explodes into a 2000-person street party involving police helicopters, a stolen garden gnome full of MDMA and a guy with a flamethrower.

Insane, glorious, offensive and wildly original, Project X could’ve easily been a stupid found-footage film about a bunch of outcasts but instead ended up setting the benchmark for party movies. 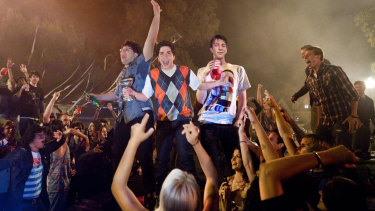 Project X redefined the party movie genre when it was released in 2012.Credit:Warner Bros

The concept was rumoured to be based on Corey Worthington’s infamous 2008 party, which made global headlines and turned the 16-year-old Melbourne high school student into an internet celebrity.

Admittedly, the Project X post-credits scene, which sees Costa grilled by an unimpressed newsreader, feels eerily similar to Worthington’s “I’ll say sorry, but I’m not taking off my sunglasses” interview on A Current Affair.

Produced on a relatively meagre budget of $12 million, it would gross over $100 million worldwide during its theatrical run, despite being slaughtered by critics.

At the time of its release, Project X critics were, for the most part, hugely unimpressed. The Hollywood Reporter called it “a grimly depressing, glumly unfunny teensploitation comedy”, while Empire was even more scathing: “possibly the worst film of the last 20 years”.

Only The New York Times seemed to understand what it was and who it was meant for, declaring the film “Animal House for the iPhone Generation.”

And it was the iPhone generation who helped build momentum around the film by downloading it (illegally) 8.5 million times, ensuring Project X was the most pirated film of 2012, according to Torrent Freak.

This was the intention of producer Todd Phillips, who was driven by a desire to make the film realistic. “The whole movie really rests on authenticity,” explained Phillips in an interview following the film’s release.

To achieve this, he decided to cast unknown actors, set up a website (projectxopencall.com) and let anyone put themselves forward. Only Thomas Mann had any previous acting experience out of the three main leads. 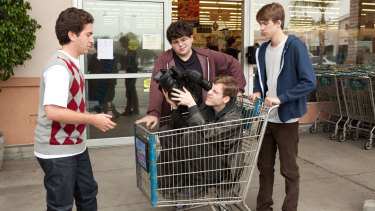 Meanwhile, the director Nima Nourizadeh was also a first-timer (on feature films) but had shot plenty of music videos for Dizzee Rascal, Franz Ferdinand, Santigold, Hot Chip and Lily Allen.

Which kind of stacks up, considering so many of the sequences in Project X play like music videos.

The next masterstroke was providing all the extras on set with mobile phones, so they could capture party footage, which was added to the final cut.

“I hated spending 10 hours looking through bits of mobile phone footage,” Nourizadeh said in an interview with Cinema Blend. “People didn’t press stop, so it kept recording in their pockets.”

No doubt it made for a labour-intensive edit, but the phone footage was crucial in making the party scenes look legitimate – especially for audiences who are used to recording their social lives on their phones.

Movies like this live and die on the scenes you can recall years later, and Project X isn’t short of memorable moments. From J.B. jumping off the roof into a deflating jumping castle to Costa convincing the police that the party is over before kicking things off again (to the tune of Kid Cudi’s Pursuit of Happiness).

But for fans of the film, the gnome moment is Project X at its most ecstatic – literally. Celebrity gatecrasher Miles Teller takes a baseball bat to the garden gnome that the boys stole on a whim from a local drug dealer, T-Rick.

It explodes in slow motion and is revealed as a hidden container full of ecstasy tablets. Cue pandemonium as the partygoers are showered in free drugs.

Rewatching Project X is an interesting experience, and much of the film can be painted as problematic, especially in the unforgiving light of 2022.

But being young is problematic: you say, do and consume things you later regret, and it’s clear the point of a film like this is not to send a message, but instead to capture the experience of youth in all its flawed glory.

And in the same way you never truly appreciate a great party until it’s over, the legend of Project X has steadily grown over the last 10 years.