That’s hot: Cooking With Paris is the show we need right now

When the pandemic started, something truly miraculous happened to famous people: while trapped inside, they discovered cooking. Naturally, each dish was documented on Instagram and celebrity home cooking quickly became a viral offshoot of lockdown life.

This trend didn’t escape the watchful eyes of wily TV executives who were desperate for relevant programming. Before long, we were served up a lazy susan of quarantine cooking shows with celebrities from Amy Schumer in Amy Schumer Learns To Cook to Selena Gomez in Selena + Chef, getting a slice of the pie. 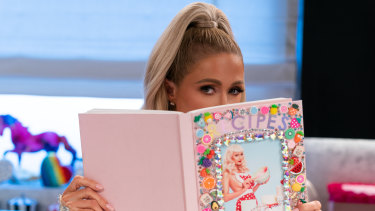 Cooking With Paris celebrates the opposite of fine dining.Credit:Netflix

Also spending time in the kitchen was America’s favourite heiress, Paris Hilton. Never one to be caught dead following the crowd, Hilton had actually started posting her cooking adventures on her YouTube channel last January, pre-pandemic. It all began with a 15-minute video titled Cooking With Paris, that featured Hilton making her “famous” lasagna. Famous only because, well, she is famous.

The YouTube clip struck a chord as it reminded us of all the reasons we love and loathe Hilton. Her strange, affected accent, her apparent cluelessness about what cooking involves – “I don’t know why you preheat the oven?” – and her penchant for tiny dogs with annoying names. “This is Diamond Baby; he’s my kitchen assistant.”

But while other celebrities were looking to channel their inner professional chef – in the first episode of Selena + Chef, Gomez attempts a tricky cheese souffle – Hilton was happy to knock up a low-rent lasagna.

Fast forward to 2021, and Cooking With Paris has become a six-part Netflix series, arriving on the streaming service earlier this week. Hilton’s timing couldn’t have been better with half of Australia stuck at home and suffering lockdown fatigue. Add to that, all our early cooking enthusiasm has been sapped – no one cares about making sourdough from scratch anymore; we just want to eat cereal and zone out.

Hilton understands us, and the first episode of Cooking With Paris begins with Hilton cruising the aisles of her local grocery store to pick up her favourite cereal. (It’s Lucky Charms, for those interested). The first guest in the series is none other than Paris’ former best friend/assistant Kim Kardashian West and the theme for their meal is “Breakfast In The Clouds,” which translates to cereal, French toast and champagne. Now we’re talking.

The pair potter around a kitchen that allegedly belongs to Paris, though she looks pretty unfamiliar with the layout. She also seems unfamiliar with everyday kitchen utensils. “What are tongs?” she asks at one point, eliciting an eye roll from Kim Kardashian. 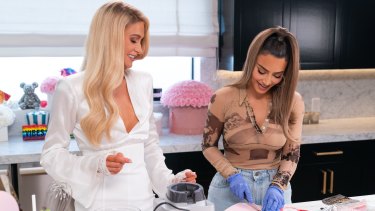 Paris Hilton and Kim Kardashian West on the set of Cooking With Paris.Credit:Netflix

Episodes are only bite seized, running a little over 20 minutes each, so you’re never in danger of overindulging. They’re also dotted with real-life cooking tips that feel particularly poignant while in lockdown. “If in doubt,” says Hilton in her trademark drawl. “Add more sprinkles to everything.”

The more Cooking With Paris I consumed, the less obliged I felt to test myself in the kitchen ever again. Be gone Ottolenghi cookbooks, so long kilos of sumac! Instead, I will stick to Hilton’s well-trodden culinary, including burgers and fries, tacos, spaghetti bolognese, and steak night. Sure, Hilton is eating a $1000 filet mignon but still.

Therein lies the appeal of Cooking With Paris: it is both far fetched and familiar. When a recipe calls for a cup of water, Hilton unscrews a bottle of Evian and thoughtlessly tips it in. But in a later episode, when Hilton complains that the worst part of cooking is waiting for your meal to be ready, she may as well be speaking for all of us.

The finale features the Hilton clan coming together for a family meal, and for those who haven’t seen their loved ones in a while, it may prove a surprisingly emotional watch. But right when you’re starting to get sucked in, Hilton will drop a Paris-ism and remind you that this show is meant to be fun. “I shouldn’t go shopping in shoulder-length gloves.”

A pinch of heart and a dash of humour, it’s this combination that makes Cooking With Paris a surprise recipe for success.

cooking, hot, Paris, thats, With
You may also like: