Follow
Home » Lifestyle » The $100b budget: no brakes on spending just yet

The $100b budget: no brakes on spending just yet

This is the state’s $100 billion budget.

Spending by the NSW government will hit that threshold for the first time in the coming financial year as the economy emerges from last year’s pandemic-induced recession. 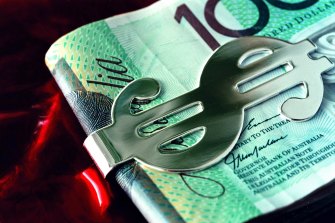 Even though the state’s finances are making a stellar recovery, Treasurer Dominic Perrottet is not putting the spending brakes on just yet.

The budget will still be in deficit to the tune of $8.6 billion in 2021-22 – an even bigger shortfall than the last two financial years (those deficits are now smaller than expected).

The government will spend $6 billion on new and ongoing economic stimulus in the coming year including ongoing payroll tax relief, rebates and incentives to visit the CBD.

Overall expenditure by the NSW government grew by 8.2 per cent this financial year and will jump by another 7.3 per cent next financial year. Although things will change in 2022-23 when state government spending is forecast to contract by 3.6 per cent as stimulus measures are withdrawn.

A year ago NSW was reeling. More than a quarter of a million people had lost their jobs in the lockdowns between March and May. State Final Demand – the broadest measure of NSW economic activity – plummeted 8.6 per cent in the June quarter 2020 biggest quarterly contraction in the state’s history.

But the budget underscores the strength of the state’s economic rebound. Key revenue streams have surged back and a modest budget surplus is now forecast by 2024-25.

“We are taking advantage of a time when we can borrow at record low rates,” Mr Perrottet said.

The state government has borrowed $33 billion since the beginning of 2020 to offset the effects of the coronavirus crisis with an average interest rate of just 1.48 per cent.

But the unpredictable nature of the pandemic means challenges and vulnerabilities remain.

“Significant risks remain that could postpone, if not derail, the recovery,” the budget says

Delays in the vaccine rollout could cause further disruptions, especially if they result in a further delay in reopening the international border.

“A further one-year delay in opening of the international border could see the economy 0.9 percentage point smaller and the unemployment rate 1 percentage point higher by 2022-23,” the budget says.

The withdrawal of COVID stimulus measures and significant spending reductions in 2022-23 looms as a political challenge for the government.