The daring Australian scientists who changed the course of our world

There’s a heart-stopping moment in Brett Mason’s Wizards of Oz. It’s August 29, 1940, and a plain black box is making its way across London, precariously strapped to the roof of a taxi. Inside is the first prototype of “cavity magnetron number 12” – what would go on to become the first microwave radar – and plans for the first nuclear bomb.

The box is on the roof because it won’t fit in the back seat with its handler, who is on a journey from London to the United States as part of a desperate quest by the besieged British to enlist the Americans’ scientific help to win the war against Germany. A loose strap, an air raid or traffic mishap could have destroyed what became known as the “briefcase that changed the world”. 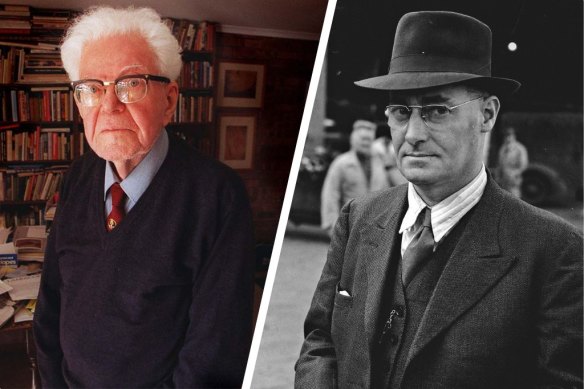 Left: Sir Mark Oliphant at home in Canberra in 1997. Right: Howard Florey faced a challenge in convincing governments of the value of his work.Credit:Mike Bowers

The reason that box and its contents existed in the first place is Mark Oliphant, an Australian physicist whose research and determination were the driving forces behind two of three innovations that have changed not just the course of World War II, but of human history.

Nearly a year later, another briefcase was also winging its way across the Atlantic, and it too would have a profound impact on human history. This briefcase was carried by Australian scientist Howard Florey, and it contained notebooks and several vials of a brown powder, samples of the penicillium mould from which the antibiotic penicillin was isolated. Florey’s mission was also to convince the wealthier US to fund the scaling up of penicillin’s manufacture.

Wizards of Oz tells the story of these two friends, born in Adelaide three years apart, who went on to transform warfare, industry and medicine. 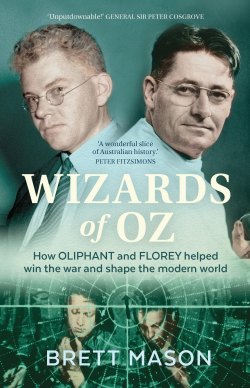 It’s impossible to overstate their impact. “Oliphant and Florey led teams that over a period of 100 days in early 1940 developed the device that was critical to winning the war, conceived the powerful weapon that ended it, and produced the miracle treatment that enabled countless casualties to survive it,” Mason writes.

Both Oliphant and Florey were already distinguishing themselves in their chosen scientific fields – physics for Oliphant, and pharmacology and pathology for Florey – well before the war. But the threat of fascism and Hitler’s march across Europe turbocharged their quest for knowledge that might help turn the tide in the Allies’ favour.
The book jumps back and forth between Oliphant and Florey as they both struggle to overcome scientific and institutional barriers in getting their discoveries recognised, funded and adopted.

With the benefit of hindsight, it seems astonishing that both had to work so hard to convince governments – their own, and the American – of the potential of their work, especially in Florey’s case. Both scientists crisscrossed the U-boat-infested waters of the Atlantic, and the US, trying to drum up support and funding, while Britain and Europe were being bombed into near-oblivion.

Mason gives a lot of space to the conflict raging in the background to these scientific quests – so much so that at times it feels like it’s a third character in the story. But it does serve to ratchet up the tension. There are sections that are so gripping, the stakes so high, the odds seemingly so impossible that there’s almost a relief from remembering that we know how this turned out.

But that relief is tempered by the awful knowledge of what is to come from Oliphant’s work on nuclear fission. Oliphant clearly knew the terrible potential of the discovery, which was actually made by two German Jewish refugees working with him – Otto Frisch and Rudolf Peierls – because he pulled out all the stops to get it over the line and save his adopted homeland of the United Kingdom. How the consequences affected him can only be speculated, as he rarely spoke of it after the devastation of Hiroshima and Nagasaki.

The speed with which these three scientific discoveries moved from the lab to the battlefield is remarkable, especially given the limitations of transport and communications at the time. Florey’s penicillin went from being grown in bedpans in his lab to treating millions in only two years. The Enola Gay and its fateful cargo departed only four hours after the first successful test of the nuclear bomb at Los Alamos.

Mason’s intensive research is evident throughout this book, which is dense with characters, dates, places and events. But the taut narrative thread of these two men’s scientific, political and personal journeys pulls the reader through it.

It’s a timely reminder, after so many years of Australian science being neglected and diminished, of an era when Australian scientists not only held their place on the world stage but commanded it.

Wizards of Oz by Brett Mason is published by NewSouth, $34.99.

Gaslighting Is Merriam-Webster's Word of the Year. Here's How Therapists Define It

U.S. Beats Iran, Advances To Second Round Of World Cup; Will Face Netherlands Next

Kylie Jenner denies covering up for Balenciaga — while wearing Balenciaga