The fascinating true story behind Van Gogh’s Sunflowers: As the third iteration of the work is doused in soup by protesters, how the troubled painter created SEVEN versions which are now scattered around the world – with one destroyed in WWII

Van Gogh’s Sunflowers, which hangs in the National Gallery, has been doused with Heinz tomato soup by environmental protesters this afternoon.

Two women from Just Stop Oil, named as Anna Holland, 20, and Phoebe Plummer, 21, threw two cans over the iconic £76 million painting this morning before gluing themselves to a wall inside the London gallery.

Art fans will be relieved to hear the painting was ‘unharmed’, according to the Metropolitan Police – particularly understanding the significance of Van Gogh’s Sunflowers collection and how it culminated in a breakdown which led the painter to slice off his own ear.

In total, he painted seven works in the collection, which are scattered all around the world – and one was even destroyed at the end of the Second World War. 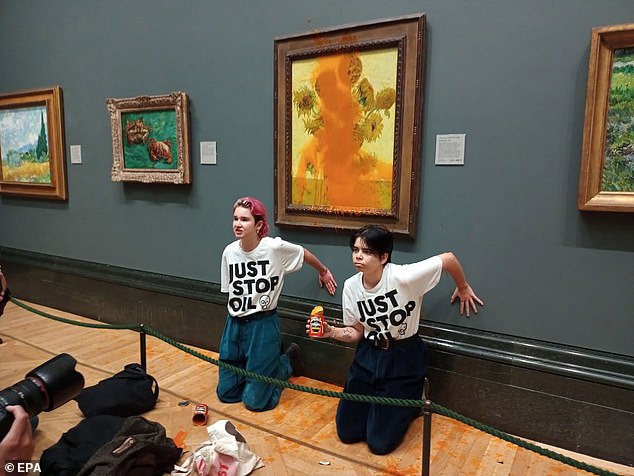 Two Just Stop Oil protesters threw cans of tomato soup over the third iteration of Van Gogh’s sunflowers painting this morning, before glueing themselves to the wall 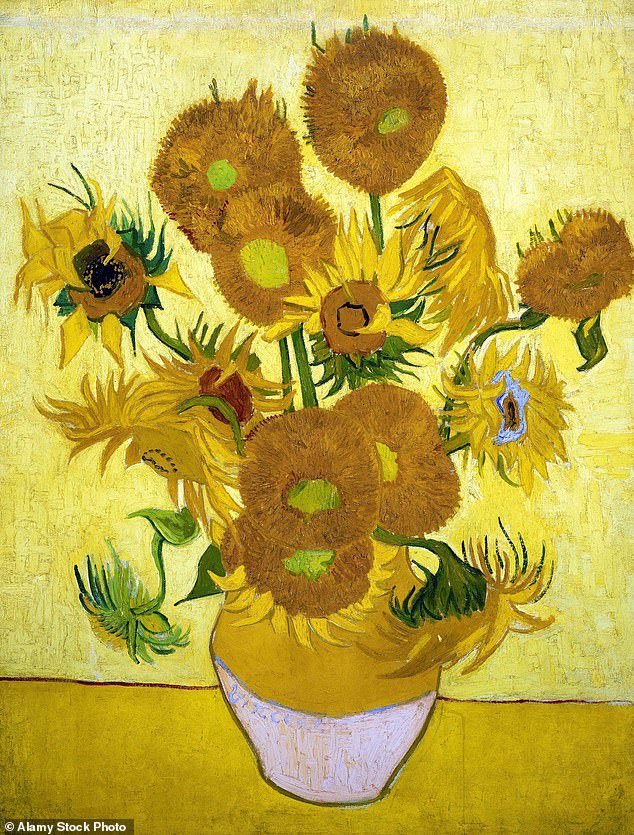 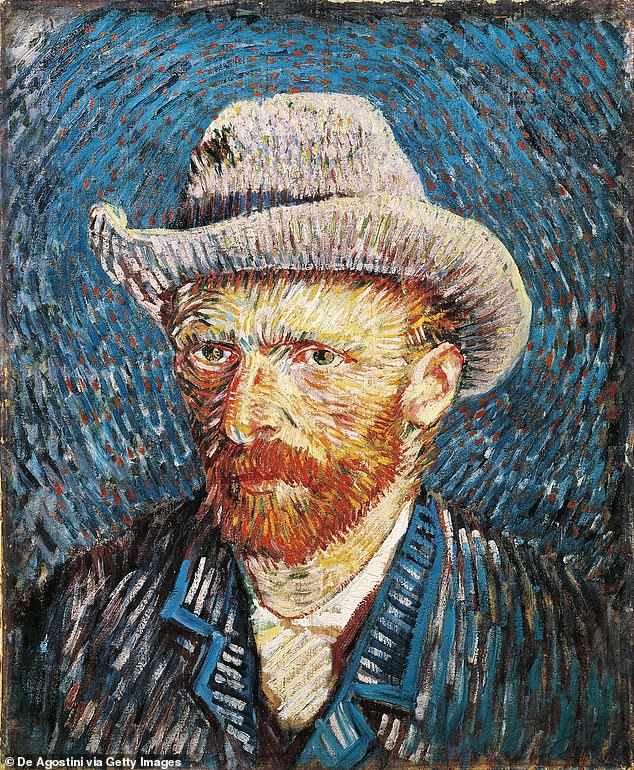 A self portrait of the Dutch artist, who sliced off his own ear after suffering from a breakdown shortly before he passed away

One, unseen in public since 1948, is in the private collection of an unknown millionaire, revealed only to his closest friends. Five others are in museums — in Philadelphia, Amsterdam, Munich, Tokyo (bought for a world-record £25 million in 1987) and our own National Gallery in London.

But the seventh was destroyed during World War II. Called Six Sunflowers and painted in August 1888, it had been in the collection of a wealthy collector, Koyata Yamamoto, living on Japan’s coast when his town was hit by an American bomb on August 6, 1945 — coincidentally, the day the atomic bomb fell on Hiroshima.

The painting, hanging over the sofa in Yamamoto’s sitting room, was obliterated. Yamamoto managed to escape the raging firestorm, but his prized picture — with its heavy frame — was too cumbersome to carry.

But in 2013, almost 70 years later, a British art historian unearthed a colour photograph which revealed the work in all its glory.

The print — with its vivid yellows, glowing oranges, citrus greens and royal blue background — gives us a rare glimpse of what the original might have looked like. 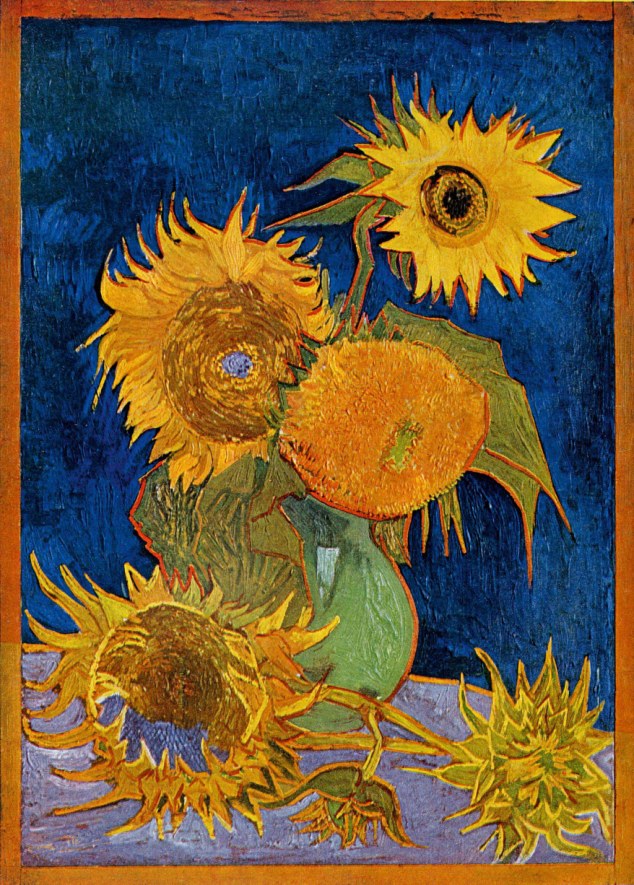 Missing link: This photograph of the destroyed second version was found in a Japanese museum

Art historian Martin Bailey stumbled on the photo while researching a book on the Sunflower series. As well as preserving Van Gogh’s original bold colours, it also shows the unusual, heavy, timber frame that was specially chosen by the artist.

While most picture frames at the time were white, Van Gogh chose an orange one to play against the orange of the sunflowers.

With the rediscovery of the photograph of the seventh picture, the full story of the Sunflowers series fell into place. Van Gogh painted them at a critical point in his life.

Aged 35, he was less than two years from death, his career an unmitigated failure, his excitement at painting mingled with disappointment, sadness and self-destructive mania.

Before turning to painting, he had been an art dealer and teacher in England — in Brixton, Ramsgate and Isleworth — a bookseller in Holland, and a missionary in Belgium. Those around him despaired of his prospects almost as much as he despaired of himself.

In one letter, he angrily reported that his family wanted him to become a carpenter, accountant or baker. Safe to say, the prospects of being a world-famous artist seemed remote.

His romantic life was an equal disaster. When he proposed to the daughter of his Brixton landlady, she refused because she was already engaged to a former lodger. 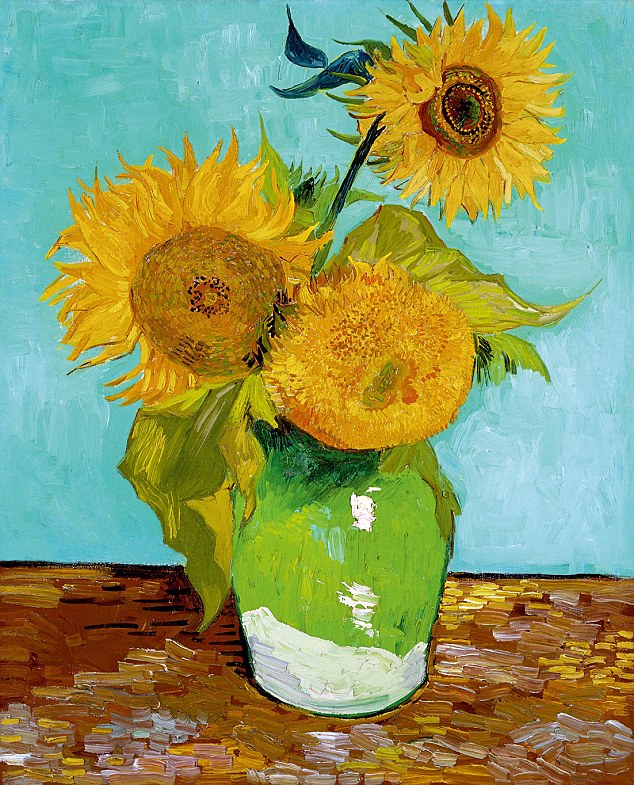 The first version of Van Gogh’s sunflower painting (pictured) is now in a private collection, with an unknown owner 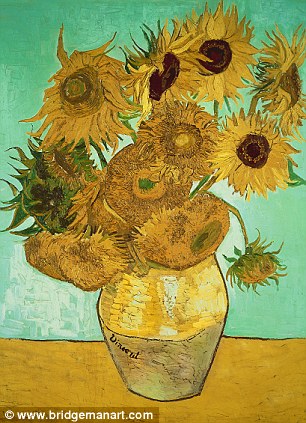 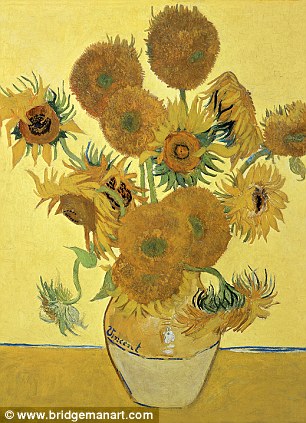 The third version (left) is in the Neue Pinakothek in Munich, while the fourth version (right) hangs in the National Gallery in London

When she told him that he couldn’t see her again, he thrust his hand into the flame of a light, saying to her father, his uncle: ‘Let me see her for as long as I can hold my hand in this flame.’ The desperate ploy didn’t work.

A relationship with an alcoholic prostitute followed — and his romantic prospects weren’t improved by a bout of gonorrhoea in 1883. He is also thought to have contracted syphilis.

Nor were his violent mood swings helped by a poor diet, rich only in absinthe and tobacco. In February 1888, he moved to Arles in Provence, seeking refuge from his misery and hoping the fresh air would alleviate his chronic smoker’s cough.

He signed a lease on the so-called Yellow House, which he was to immortalise in so many of his canvases, and started painting obsessively. And what obsessed him most were sunflowers.

A letter written at the time from Van Gogh to his art-dealer brother, Theo, survives.

‘I’m painting with the gusto of a Marseillais eating bouillabaisse [a local fish soup],’ he wrote, ‘which won’t surprise you when it’s a question of painting large sunflowers. I’d like to do a decoration for the studio. Nothing but large sunflowers.’

And so he began the pictures that would sell for millions — but not until after his death.

During his lifetime, Van Gogh was painfully aware of how unpopular his work was. In fact, he only ever sold one painting. Two days after that first letter to Theo, he wrote another, saying: ‘We live in times when there’s no market for what we do … I fear that it will scarcely change during our lifetime.’

Van Gogh didn’t just have an exceptional talent. He was also astonishingly quick — the first four sunflower pictures were done in a week. But for all their golden, glowing colours, no one would buy them. 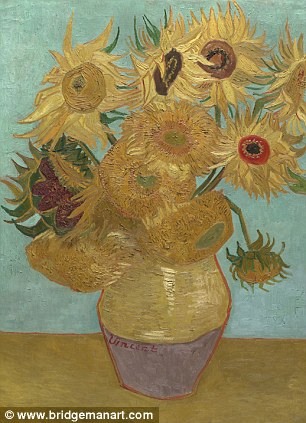 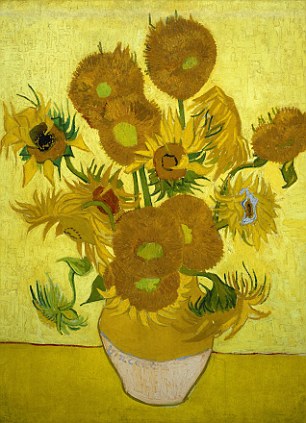 A repeat of painting No 3 (left): On show at the Philadelphia Museum of Art, and (right) a replica of number four, now in Amsterdam’s Van Gogh Museum

Despairing, but not yet defeated, Van Gogh continued working at a furious rate through the autumn of 1888. He painted a self-portrait, a picture of fellow artist Paul Gauguin who was visiting him at Arles and several famous pictures of empty chairs.

Relations with Gauguin were stormy and Van Gogh was terrified his friend might desert him, leaving him alone with his demons in Arles. Then came the blow that sent him off the rails for good.

On December 23, he received a letter from his adored brother, Theo, saying he was getting married. That very evening, he slashed off a chunk of his ear in an Arles brothel, handing it over, wrapped in newspaper, to a prostitute, asking her to ‘keep this object carefully’.

It wasn’t that Van Gogh disliked his new sister-in-law, Johanna Bonger, but he feared she would interfere with his close relationship with his brother.

‘Vincent was worried about losing his brother’s support, both emotional and financial,’ art historian Martin Bailey writes in his new book. ‘And these fears played a key role in provoking his self-mutilation a few hours later.’

By January, Van Gogh had recovered enough to leave hospital and paint three winter copies of his summer sunflower pictures. But the damage had been done and he entered a spiral of self-destruction.

Between February and May, he was in hospital again, suffering from hallucinations and paranoid fantasies that he was being poisoned. Among local villagers he had acquired the nickname ‘fou roux’, the mad redhead. 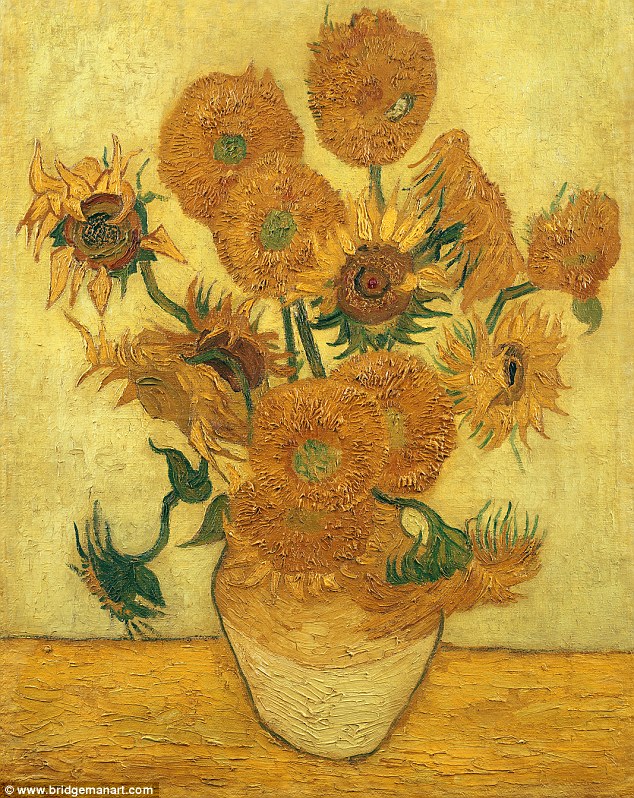 Final painting of version four, which can be seen at the Sompo Museum of Art in Tokyo, Japan

In May, he was moved to an asylum in nearby Saint-Rémy-de-Provence. He remained there for a year, sometimes seeming to recover his senses, at other times suffering crippling relapses.

Though his mind was tortured with visions and delusions, he continued to produce bold, ravishing canvases of the neighbouring olive groves, vineyards and cornfields.

Then, in July 1890, two months after leaving the asylum, he shot himself in the stomach in Auvers, north-west of Paris. He chose to do it in the summer wheatfields — the landscape he had just been painting so memorably. Two days later, he died in the Auberge Ravoux, the inn where he was lodging.

Biographers still debate the exact causes of Van Gogh’s acute mental condition. Some say it was syphilis, which can induce symptoms of madness, others that it was manic depression or schizophrenia. Whatever the cause, Van Gogh’s mental decline was certainly exacerbated by absinthe, acute anxiety, poverty and malnutrition.

But through this fog of madness, Van Gogh produced some of the most extraordinary paintings the world has ever seen.

What is more remarkable still, is that these masterpieces came about quite by chance.

One hot, breathless August day in Arles, the models Van Gogh had engaged to sit for him failed to turn up and it was too stifling to  consider taking his easel outside.

So he cast his eye around the Yellow House for inspiration.

Seizing a handful of sunflowers, already wilting and curling in the heat, he arranged the blooms haphazardly in several green, cream and yellow earthenware pots.