‘Old people’ who call work meetings on a Friday afternoon, expect staff to make calls as part of their job and make random noises over Zoom have been put on notice by Gen Z.

The incoming generation claim the workplace behaviours ‘give them the ick’ as do ‘messages longer than one sentence’ and ‘being given a Dell laptop’ to use on the job.

Known as the Zoomers, the newly minted members of the professional work force prefer to post their frustrations about their life on TikTok, where they can garner sympathy and likes. 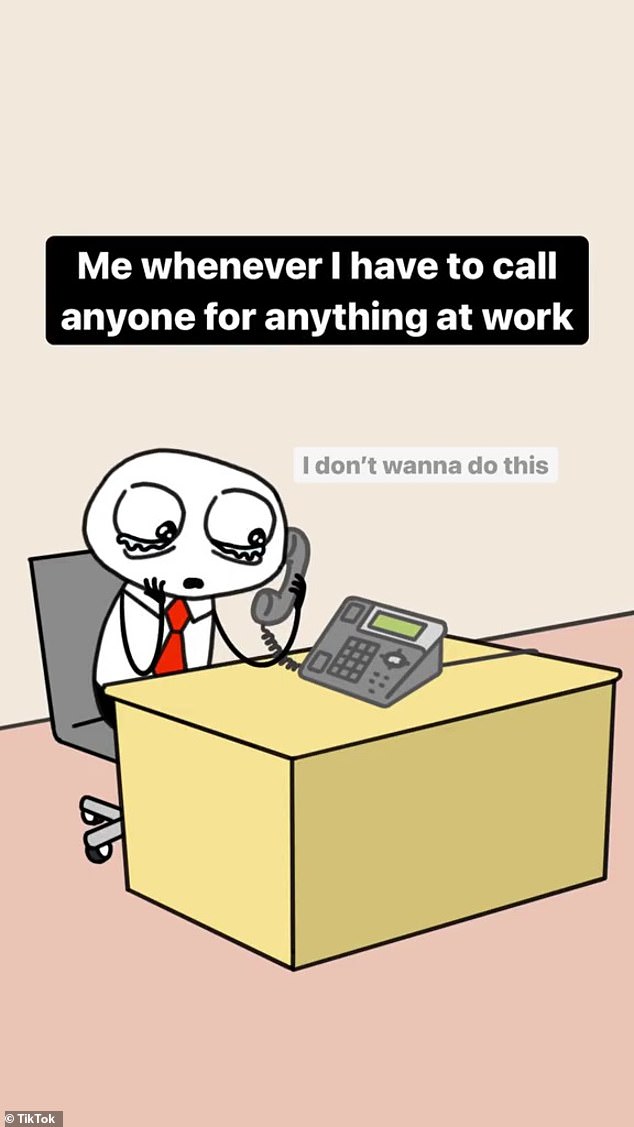 Workplace solutions expert Adam Butler, Founder and CEO of Officeology, took a deep dive into the video-sharing platform in an attempt to understand why young people hate the common workplace behaviours.

Speaking to FEMAIL he explained the five most common pet peeves and how they can be addressed in the workplace.

The most popular ‘ick’ for the generation isn’t work specific but is harder to avoid there then it is in leisure time, getting on the phone.

The Introverted Attorney summed up the feeling in an animated video which quickly went viral and has racked up over two million likes.

‘Part of the job is talking to other humans,’ the caption read, accompanied by the clip of an office worker crying over his desk phone.

‘Me whenever I have to call anyone for anything at work,’ the text on the video read. 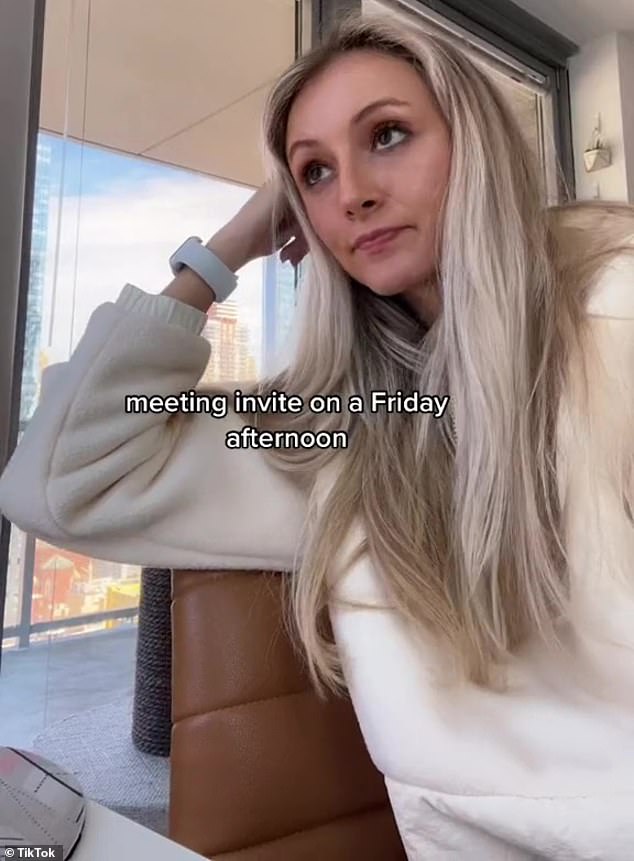 Others revealed their hatred for Friday afternoon work meetings

The viral video resonated with other TikTokkers, with one admitting they avoid making calls at all costs.

‘I remember my phone broke at work and I just didn’t say anything for weeks,’ they said.

Others revealed the video made them feel better – knowing they aren’t alone – with some dubbing Gen Z the generation of phone anxiety.

‘I used to work in a call center and this is too accurate,’ one said.

‘I work in customer service and this is too accurate,’ said another.

While others admitted calls make them more nervous.

‘Outgoing calls are fine cause I know what it’ll be about. The incoming calls scare the hell out of me cause they could be anything,’ one man said.

Mr Butler said the anxiety people feel about making calls when they are new to a role is ‘normal’ but can be managed with practice.

‘(by) Making your manager and coworkers aware that this is something you struggle with will allow them to support you by delegating less calls to you in the beginning, or even providing a script to read off of,’ he said.

Being given a Dell laptop

According to some Gen Zs the laptop you are given says a lot about the workplace – and the worst option is ‘Dell’.

Corporate TikTokker Liljehu says if your new employer sends you a Del then it is a sign to ‘look for a new job’.

‘They are probably experiencing cash flow issues,’ he said in a viral video.

Before claiming bosses who send out the Lenovo ThinkPad consider employees ‘a number’ and those sending out MacBooks don’t prioritise their spending correctly.

‘My Dell overheats on sleep mode,’ one person complained.

‘So does mine lol! the second I close it and put it away it’s like I have the sun in my backpack,’ added another.

With a third explaining the only way to ‘fix a Dell’ is to ‘not get one’.

And while Dell ranked highest for ‘ick factor’ in the comments other options also appeared to put the younger generation off.

‘I just started a new job and they gave me a DESKTOP for a wfh job. I was so insulted,’ one woman said.

But Mr Butler said people shouldn’t be put off by the equipment supplied to them by their boss. 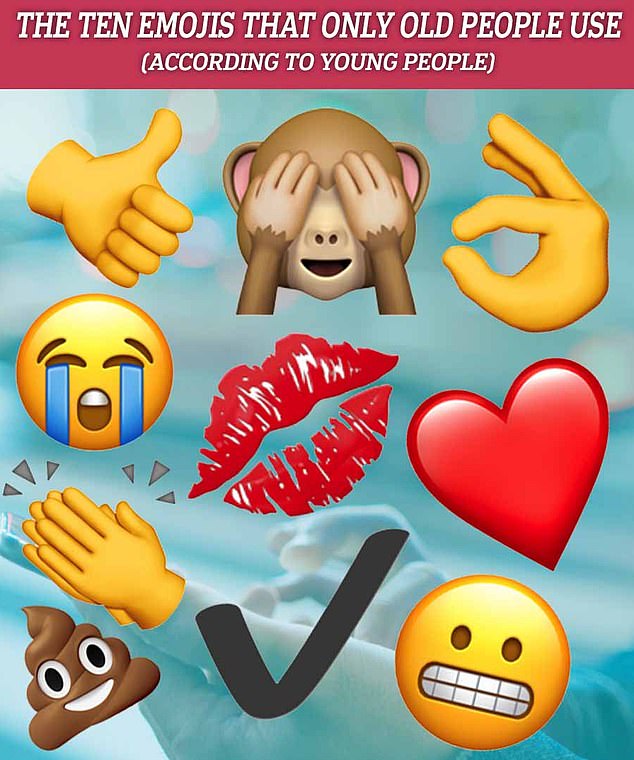 According to a recent poll of 2,000 young people aged 16-29, emojis used by ‘old people’ include the thumbs up, the red love heart, the OK hand and the grimacing face

Gen Z have complained about ‘that’ noise bosses make to fill the void when they are sharing their screen on Zoom.

Roberto PePe, who posts under the name ‘I want newwww’, summed up ‘the noise’ in a short clip of his own.

In the video he is fiddling with his mouse and looking at the screen. He has AiPods in and is making a ‘choochhhoo’ noise.

‘That sound every person makes on Zoom when they have no clue what to do,’ is written in a caption over the video.

Roberto adds to this by using the pet peeve hashtag and adding ‘let me drive’ in the caption.

‘I think I’ve done this before and I’ve given myself the ick,’ confessed another.

Mr Butler said ‘we have all been there’ before showing his age by suggesting people start conversation.

‘Although there’s nothing wrong with humming or making sounds, an alternative silence filler is to strike up conversation with those in the call. Ask them about their weekend or any plans they have for the evening,’ he suggested.

But this tip was mentioned in the video’s comments as another ‘awkward’ attempt to fill the void – often used by ‘older’ management or team members.

‘So how was everyone’s weekend? *on a Wednesday*,’ one woman wrote.

Many disagreed with his statement that there is nothing wrong with humming and said the noise is a ‘cry for help’ or a sign that old people are ‘at the mercy of technology’. 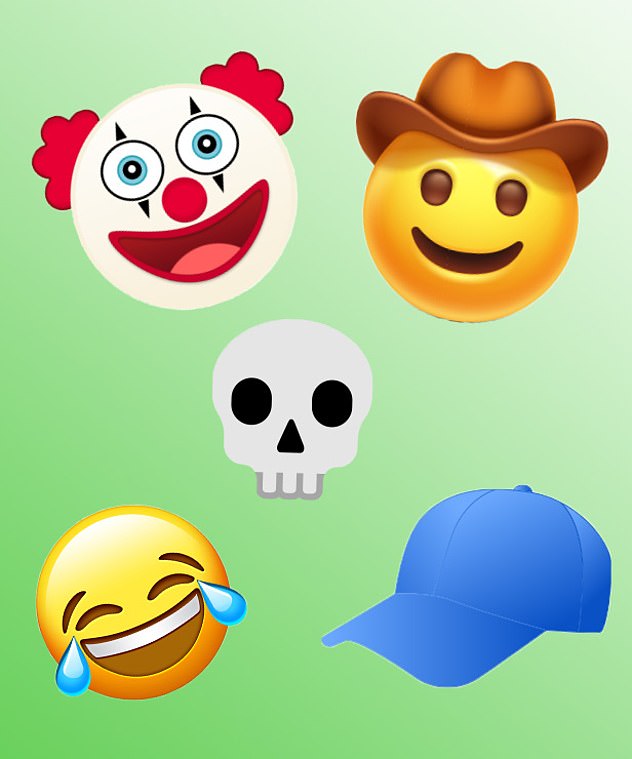 The five you SHOULD be using: You should be using the blue baseball cap, skull and both of they crying laughing emojis in texts and online to stay relevant and not appear ‘old’

According to Gen Zs on TikTok all work-related slacks and texts should be as short as possible, with many suggesting a sentence is enough and even half sentences are completely appropriate.

‘Do not send me paragraphs, I don’t have tome to read an essay,’ is the message one young boss wants to put out.

‘Be brief – be bright – be gone,’ she suggests in her video where she explains anything lengthy gives her the ick.

‘I don’t have the time or the energy, or frankly the interest in reading paragraphs’.

And she is not alone.

‘Chats are for at most a sentence at best a gif,’ one person said.

‘A project manager se t me three paragraphs of notes that all boiled down to, put a dash in the title on the document,’ added another.

A third said anything too long needed to be put in an email instead of clogging up a chat.

Another woman shared her ruling on wordcounts: ‘Listen – word in chats, sentences in emails, paragraphs in meetings.’

Mr Butler admitted it can be difficult finding the right route here as ‘everyone has their preferred method of communication’.

‘Work together on deciding what works best for the both of you,’ he suggested.

The fifth and final Gen Z pet peeve is the Friday afternoon meeting – but meeting peeves also extend to hour-long meetings that could have been emails and last-minute meetings.

Is the thumbs-up emoji in your text vocabulary?

Is the thumbs-up emoji in your text vocabulary?

Kellyn McMullen made a TikTok expressing her dislike for all three. The video shows the young woman working from home saying ‘another one thankyou’ every time she receives one of the three annoying meeting requests.

‘I have a meeting at 2PM on a Friday. Seriously, who schedules a meeting for Friday afternoon,’ one person vented on the matter using Reddit.

‘I’ve got the same thing, same time, and I had the exact same line flash through my head,’ said another.

While others suggest meetings should not be held before 10am if possible while Friday meeting should never be ‘recurring’.

The Zoomer generation also recently expressed their ‘icks’ when it comes to email phrases and the use of the increasingly unpopular thumbs up.

‘Per my last email’ – The information is in previous correspondence. Why did not bother to read it before asking?

‘Hope this helps’ – Never ask me for anything again.

‘Thank you for your feedback, I’ll be sure to keep it in mind’ – Your criticism is incorrect and irrelevant and I’ll never consider it.

What is your most-hated passive-aggressive corporate email phrase?

What is your most-hated passive-aggressive corporate email phrase?

‘Just to clarify’ – Do you realise how stupid that sounds?

‘Just circling back’ – Give me an answer to my question right now.

‘As previously discussed’ – I didn’t put it in writing last night because I assumed it was obvious and that you were an adult.

‘While I understand your urgency’ – Just because you didn’t do something when you were supposed to doesn’t make it my problem.

‘I’ll let you two take it from here’ – I’m not part of this conversation and I don’t want to be.

‘Thanks for the input!’ – Do not speak to me ever again.

‘I’ve attached another copy for your convenience’ – Don’t pretend like you didn’t see the first one.

‘Just a few things’ – This is so terrible, where do I even begin?

‘Friendly reminder’ – There is nothing friendly about this message.

‘At your earliest convenience’ – Do it now!