Sea-change moves and holiday homes have been in hot demand, but nowhere hotter than this: in Sunshine Beach house prices have almost tripled in five years.

House prices in the quiet village in the Noosa Shire lifted a whopping 195.5 per cent over the five years to June, the steepest growth for any suburb in the country, making it the first Queensland suburb with a median house price north of $3 million. 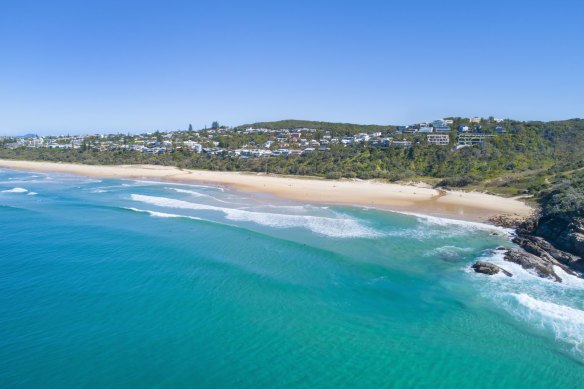 The median house price in Sunshine Beach was just shy of $1.1 million in 2017. It now sits at $3.25 million. Credit:Sunshine Beach Real Estate

Unit prices also more than doubled in the past five years, increasing 127.3 per cent to $1.5 million, the second-steepest jump for a suburb, after Jindabyne in the Snowy Mountains.

Domain’s chief of research and economics Dr Nicola Powell said “insane” price growth had been fuelled by record-low interest rates, limited supply and increased demand from cashed up sea-changers and holiday home buyers during the pandemic.

“It doesn’t surprise me that this part of Noosa has seen such roaring growth because the suburb itself has really changed … it’s become a playground for the extremely wealthy,” she said.

The suburb has had a slew of high-end sales in recent years. Gina Rinehart reportedly bought a $34 million Sunshine Beach house last year, while her BV Investments company has bought more than $42 million of real estate there this year.

Meanwhile, businesswoman Therese Rein, whose husband is former prime minister Kevin Rudd, paid $17 million for Pat Rafter’s former beachfront mansion in 2020. She more recently made a $3 million windfall on a two-bedroom cottage she purchased for $6.75 million, then resold to Rinehart for $9.75 million six months later.

Such high-profile sales gave buyers confidence in the suburb, said selling agent Kathy Wise, of Sunshine Beach Real Estate. However, it was increased demand, low supply and the prime location — hemmed by the beach and national park —that had been the driving force for the market.

“Demand from sea changers and demand for holiday homes went up, [buyers] just wanted a piece of Sunshine in whatever format they could get in,” she said. 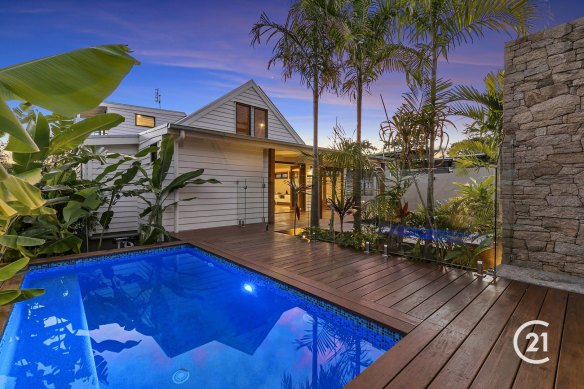 A two-bedroom home which sold for the suburb’s median house price of $3.25 million in November. Credit:Century 21 Conolly Hay Group

There was also a lot of local movement and owners looking to cash in on rapid price growth, Wise said. She sold three homes twice during the pandemic, one of which was a three-bedroom apartment which she sold for $805,000 in 2020, then recently resold for $2 million. It was renovated between sales.

While a $3 million budget once guaranteed a home with ocean views, buyers were now likely to get a knockdown or fixer upper, with ocean glimpses, close to the village, Wise said. Or a renovated property further back from the beach but within walking distance.

The market had slowed a little, Wise said, but she was still fielding strong demand from local and interstate buyers. She expected the market would see a strong finish to the year, before plateauing.

“It’s not 2021 … but honestly, I don’t know how long both buyers and real estate agents could keep at that pace, it was so hectic,” she said.

Prices across the Noosa region have pulled back, with the median down 4.8 per cent over the June quarter. Powell noted that while cashed-up buyers were less likely to be affected by rapidly rising interest rates, higher priced markets tended to lead downturns, and have bigger price swings.

Sales agent Tom Offermann, of Tom Offermann Real Estate, said demand for Sunshine Beach homes was still outstripping supply and had yet to be affected by rising interest rates.

“We have a backlog of buyers still waiting … but the number of available properties is extremely low,” he said. “Most people say that if they sell they won’t get back in again, or ask where they would go? It’s very much a final destination for a lot of people, something they’ve aspired to for a long time.”

The suburb was no stranger to rapid price growth, Offermann said, with prices typically doubling every five years. But the rise of remote working increased demand from out-of-area buyers, who constitute about 60 per cent of purchasers. More sea changers left fewer homes empty, though holiday homes were also in strong demand.

“The proportion of discretionary properties has shrunk. You see more lights on at night, and there are not as many empty homes as more people buy properties and move into them permanently, but it is reducing the available properties for rentals,” he said.

About 31 per cent of people in the suburb were renting last year, according to the latest census data, down from 42 per cent in 2011. Meanwhile, the proportion of unoccupied homes fell from about 41 per cent to 35.5 per cent.

Rents have climbed rapidly, with the median house rent increasing by almost two thirds to $900 per week over the five years to June, Domain data show. Unit rents jumped about 51 per cent to $650. On census night, 46 per cent or rental households were spending more than 30 per cent of their income on rent, with the proportion more than doubling in five years.