The joy of children… when you’re not lumbered with your own: HANNAH BETTS revels in her role as fairy godmother, confidante and naughty aunt

My sister, Victoria, called me recently in a state of maternal triumph, for it has been scientifically proven that teenagers don’t listen to their parents. ‘I told you it’s like talking to a brick wall!’ she cried.

Experts at Stanford Medical School have used MRI scans to confirm that adolescents stop listening to their mothers’ voices at around age 13.

Researchers claim that it’s because they no longer find them ‘rewarding’. Instead, the little blighters tune into unfamiliar voices — anybody else’s.

As it happened, when Vicky called I was in the middle of a conversation with Issy, her 17-year-old daughter. 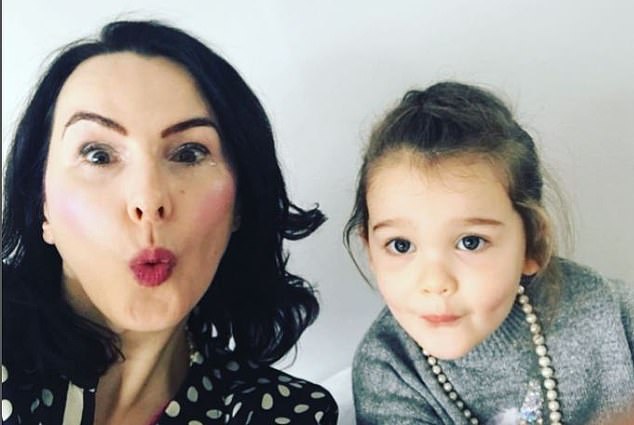 Child-Free Adult Pal Hannah Betts with her three-year-old niece, Ada. Hannah reveals why she loves her role as a aunt and godmother

I’d just contributed ideas to her A-level sociology homework. Then she’d had an exam on Margaret Atwood, whom I’ve interviewed, during which the teacher had confiscated her Dior compact and lip oil (a gift from me) as being ‘non-essential’. Cue outrage from niece and aunt.

There’s a boy in her life whose b­ehaviour we’re finding foxing. I’ve sent her a new frock (she’s been declared ‘best-dressed sixth-former’ thanks to my cast-offs). And then there’s this summer’s work experience to set up.

All in all, there wasn’t much time to catch up with my poor sister. ‘It’s a conspiracy,’ insisted 49-year-old Vicky. ‘She won’t listen to me, but you even persuaded her to change exam subjects.’

It’s true — I wasn’t convinced by the mix given ‘our’ university plans.

Ah, the joys of being what I refer to as the CAP in a child’s life — their Child-Free Adult Pal. Ten years ago, sociologists termed us Panks — that is, Professional Aunt No Kids — a species defined by our spoiling of, sharing confidences with and general nurturing of other people’s nippers.

Aunts and courtesy aunts (parents’ friends) have always played a role in raising young people. However, demographic changes mean that almost a fifth of women of my generation are child-free — the figure doubles for those with degrees. Cue Pankdom becoming a cultural force.

Whatever you call us, children, parents and non-parents all benefit.

The young receive an ally, an advocate, someone to indulge them without judgment, plus a potential counsellor who benefits from not being Mum or Dad. The parents get time off and the opportunity to practise letting go, while the non-parent is granted a friend to act up with, to nurture and to shunt them out of their comfort zone.

Victoria has had a while to come to terms with her teenage daughter boasting a 51-year-old BFF. When she was expecting Isabella 18 years ago, she had a dream that she had given birth to a mini-Hannah, in heels and full make-up. And so it came to pass. Issy and I are thick as thieves. She has even coloured her lustrous blonde locks brunette and had her eyebrows arched so the mini-me aspect is complete. 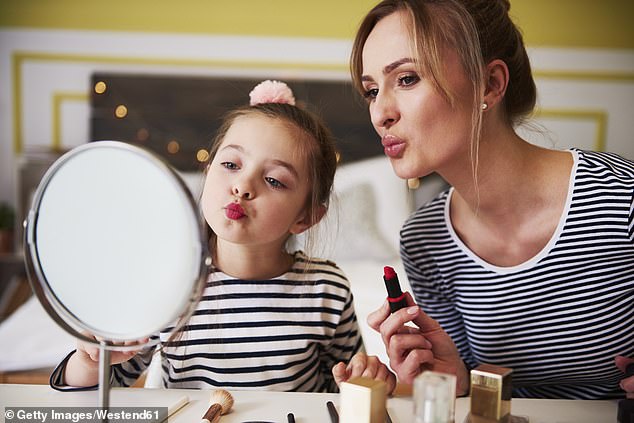 Hannah Betts describes the joys of her role as aunt and godmother and being an ally to the young. The UK-based writer says the non-parent is granted a friend to act up with, to nurture and to shunt them out of their comfort zone

It makes me tearful merely to type this, but she also appears to love me as profoundly as I love her, and thinks I’m cool (I’m not — I just own more shoes).

The day she was born was one of the greatest moments of my life — a magical, life-altering excitement that I have never felt from the idea of having my own child.

I arrived there when her little eyes were still shut. Reunited six months later, she squawked in r­ecognition like a baby bird. At two, I presented her with her first Guerlain perfume, a Betts rite of passage begun by my late mother.

From the age of four, Issy would call me from her iPad if she was unhappy or just to hang out — an honour we non-mothers now claim in an age of infant high-tech. And I learnt that you can feel love as a physical presence in your chest, just as I felt when she sank into my lap without asking.

Over the years, there have been the great highs of ritzy hotel sleepovers and — because of my job — glamorous cosmetics and an introduction to Taylor Swift. But, no less, there were also downtimes, such as when my parents were dying and my emotionally intelligent niece was there to weep along, hold me and advise. It gave me a sense of how our relationship will be in the future when I am elderly, she in her prime.

But then I am also extremely close to her cousins, Brynn, 13, and Ada, three. The former’s first words to me, aged two, were: ‘Hello, Lady. Can I brush your hair?’ I immediately knelt.

For her 13th birthday, yesterday, I chose a sequin jacket that will look incredible with her Rapunzel hair.

Ada is my spitting image in terms of looks and boisterous personality. When we’re together, we are said to speak a secret language. She is never without scent and nail varnish, and her chosen treat will be a FaceTime session to discuss books, earrings and the complex social machinations at nursery (s­omething she doesn’t share with her father — my brother). 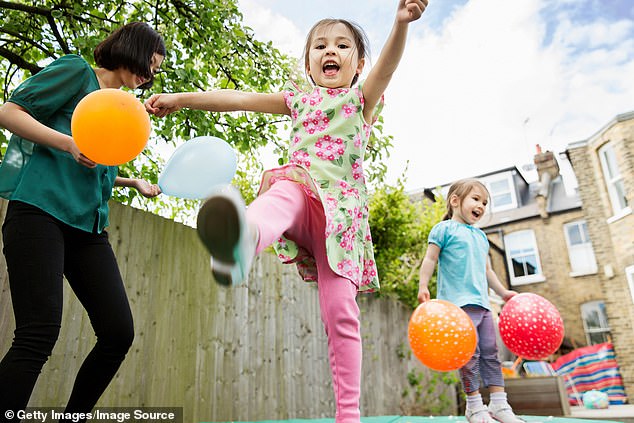 Moreover, the incredible young women I know and love extend well beyond my gene pool. I chose not to have children — a decision I’ve rarely thought about, let alone regretted. I wouldn’t call my a­ffection for these young people ‘maternal’, as if it makes up for some lack. It’s simply that, not being distracted by my own off- spring, I have time to take notice.

There are my brilliant and beautiful god-daughters, Bea and Catherine — one a TikTok influencer on her gap year, the other an actress who should be snapped up for the next Bridgerton.

Aged five, Hetty, whom I regard as an honorary god-daughter, gave me a verruca by rubbing her foot against mine so I didn’t have to do games (despite being 38). Now 18, she will be heading to my old Oxford college come October, about which I’m having to remain calm, while inwardly d­ancing a jig.

Meanwhile, six-year-old Jemima has appointed herself as a goddaughter, about which I feel supremely proud.

Life can be unfair for the fair sex. With a CAP, girls are granted an ice-cream-filled safe space in which they can swear, paint their toenails blue and experiment with life under the protective (yet strategically blind) eye of someone who loves them. In short, CAPs are a not-too-bad bad example-cumhuman safety net.

I didn’t enjoy being a child, a teenager, or a twentysomething. I was an over-thinking tomboy who found traditional femininity problematic and didn’t find her girl tribe until later in life. There was no godmother to steer me or have fun with, no older role model to make me feel less freakish.

The advantage of the relationship for me is obviously the pure joy of the thing. I imagine it’s akin to being a grandparent. My gal pals keep me young and open-minded — from my Fresh Stuff Euphoria sweatshirt to my daffodil-coloured nail varnish.

I treat children as the equals they are, priding myself on keeping youthful confidences. Share a secret with me and a secret it will remain, even from your mother.

Indeed, I was once reprimanded by my sisters for not reporting what was being shared on a WhatsApp group — namely, pornography. But if I’d gone straight to the parents, how could I be trusted by their offspring in future?

Given that they will see these things, surely it was better to have an adult in the mix who could say: ‘Goodness, that’s not like any sex I’ve ever experienced. It makes me feel a bit freaked out. What do you think?’

There have also been times when the mothers of my nieces’ friends have clearly wondered who the hell I am and what my motives might be.

‘I know who you are,’ a woman once declared on meeting me in a restaurant. ‘You are my child’s fortysomething friend.’

Still, after the couple of minutes it takes for them to realise I am merely someone who genuinely likes and supports their offspring, they tend to be delighted.

My boyfriend may make Prime Of Miss Jean Brodie-esque jokes about me and ‘my girls’ being the ‘creme de la creme’, but I noted that when his 17-year-old cousin, Lila, recently came to town to talk about her future, it was with me she chose to spend the day, not him.

Good Lord, it was fun. We had a slap-up lunch where I introduced her to the art of choosing one’s meal around chips. Then we headed off to the National Gallery for the Raphael exhibition, followed by tea and more talk.

What we discussed I obviously cannot tell you.

I’m off now to send her some books I think she’ll fall in love with — and I’m hoping for some recommendations in return.