If you’re still heartbroken over the departure of Rege-Jean Page as Bridgerton’s Duke of Hastings then fret not – there’s a new dishy duke in town.

A self-described ‘very rich duke’, Fabrice set up Lily James’s Linda Radlett with Paris lodgings, then wasted no time in seducing her in decidedly racy scenes.

If the classically handsome Frenchman looks familiar, it might be because you’ve seen him play a handsome, entitled entrepreneur in lockdown TV hit Call My Agent!, or a savvy CIA operative in Netflix thriller series Messiah.

Already a heartthrob in France, he is now poised to enjoy the same attention in the UK, with upcoming roles in Peaky Blinders and Shonda Rhimes’s drama Inventing Anna about ‘fake heiress’ Anna Delvey, who duped friends, banks and hotels out of $275,000. 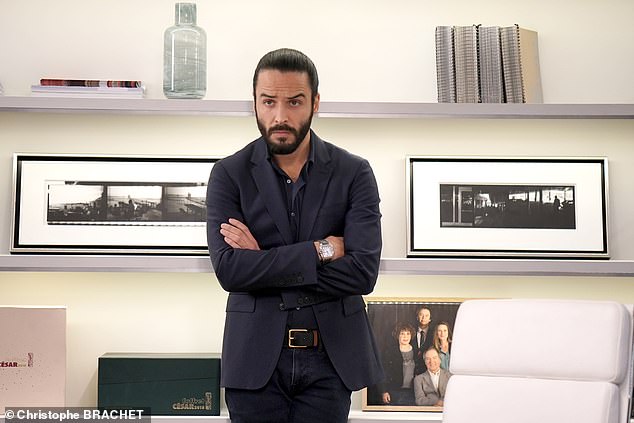 Netflix hit: If he looks familiar, it might be because you’ve seen him play another handsome, entitled character in Call My Agent!, the French TV series about a top Paris talent agency and their high-maintenance movie star clients that became a surprise lockdown hit 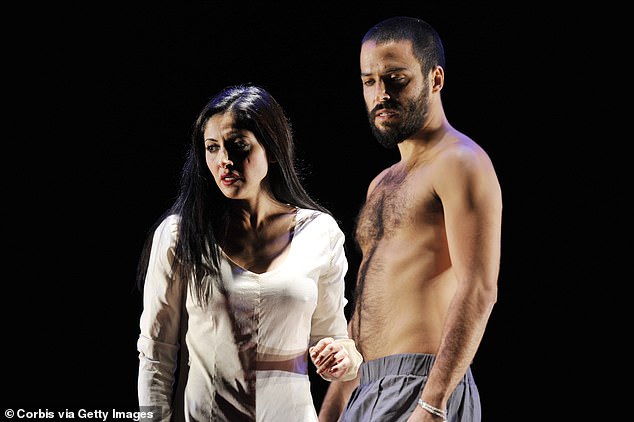 French heartthrob: Assaad Bouab in a topless scene in One Thousand And One Nights at the Royal Lyceum Theatre as part of the Edinburgh International Festival in 2011

And he definitely doesn’t mind the attention. ‘What can I say? I would be lying if I say “Oh, no!”,’ he said in an interview with the Independent. ‘It’s pleasant.’

Born in the French town of Aurillac in 1980, Assaad is the son of a French mother and Moroccan father, although he has never spoken publicly about his family.

Indeed his entire private life remains firmly out of the spotlight. French press is even divided over his marital status. If he is married or attached, he has never named a partner in interviews.

He does, however, have a four-year-old daughter who lives in Rabat, Morocco, where he also spent his childhood.

Assaad splits his time between Rabat and Paris. Photos of days out and art projects appear frequently on his Instagram account, where he boasts more than 56,000 followers.

Assaad’s older brother Younes Bouab, 42, is also an actor, and it was he who encouraged Assaad to join the school’s theatre society as a teenager. 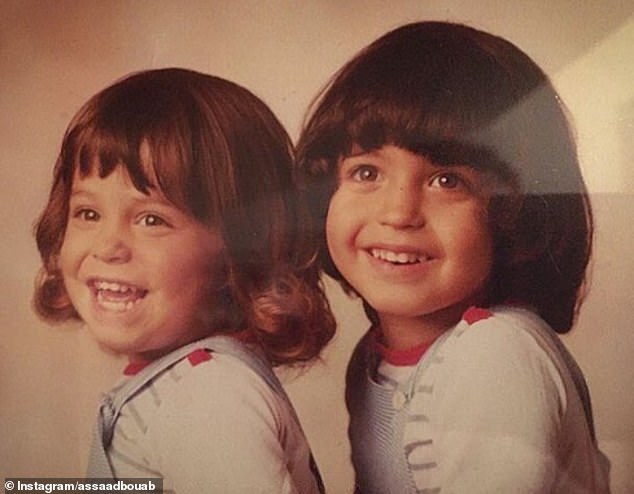 Role model: Assaad’s older brother Younes Bouab, 42, is also an actor, and it was he who encouraged Assaad to join the school’s theatre society as a teenager. Pictured, as children 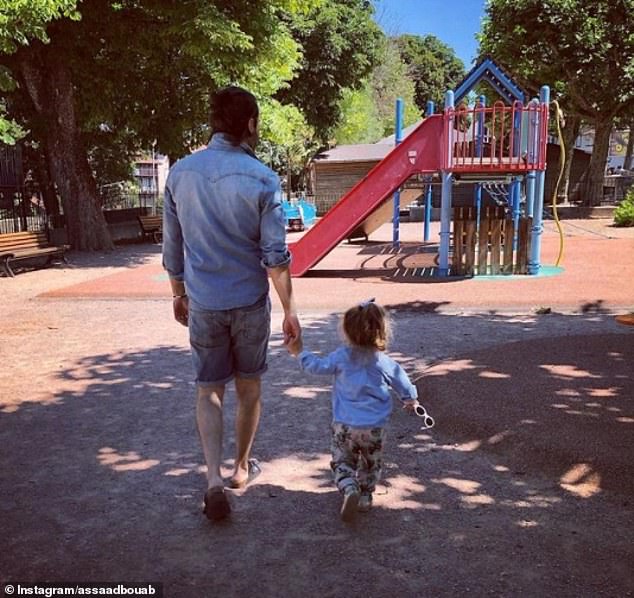 Proud father: Assaad has a four-year-old daughter who lives in Rabat, Morocco, where he also spent his childhood. Pictured, holding hands on a day out in a photo shared on Instagram

He started out in theatre, which he continues to enjoy, and landed roles in French-language films and TV shows, as well as bit-parts in American productions like Homeland.

Assaad has spoken of finding himself typecast due to his Moroccan heritage, often landing roles as a ‘terrorist’ or a troubled man from an ‘underprivileged suburb’.

In Netflix series Messiah, he plays CIA operative Qamar Maloof opposite Michelle Monaghan. The co-stars had a good relationship and shared a smiling snap on Instagram.

He has also appeared in Braquo, a French crime drama about a group of Parisian police officers who don’t always play by the rules.

Before lockdown hit, he was due star opposite Kristin Scott Thomas in the National Theatre’s Phaedra, a production which has been postponed. 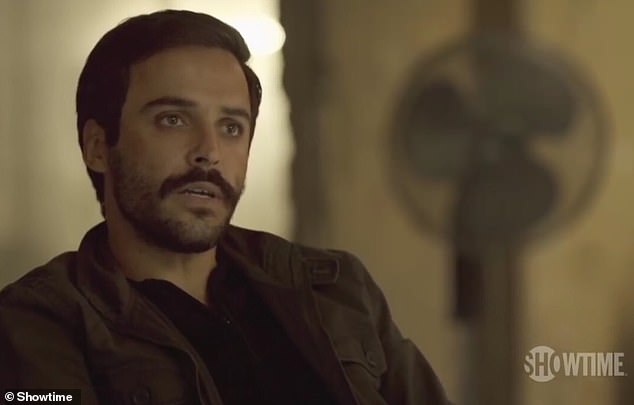 Early roles: Assaad started out in theatre and landed roles in French-language films and TV shows, as well as bit-parts in American productions like Homeland (pictured in series five) 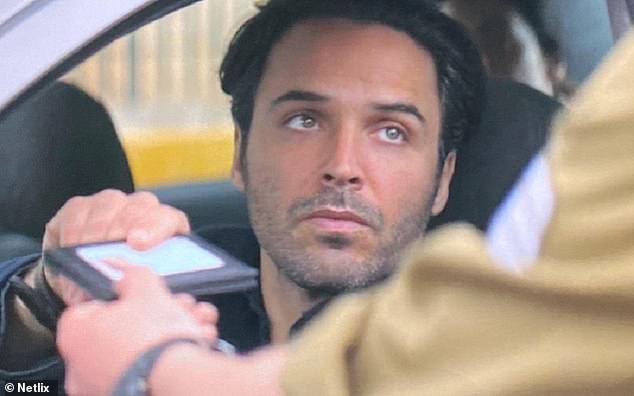 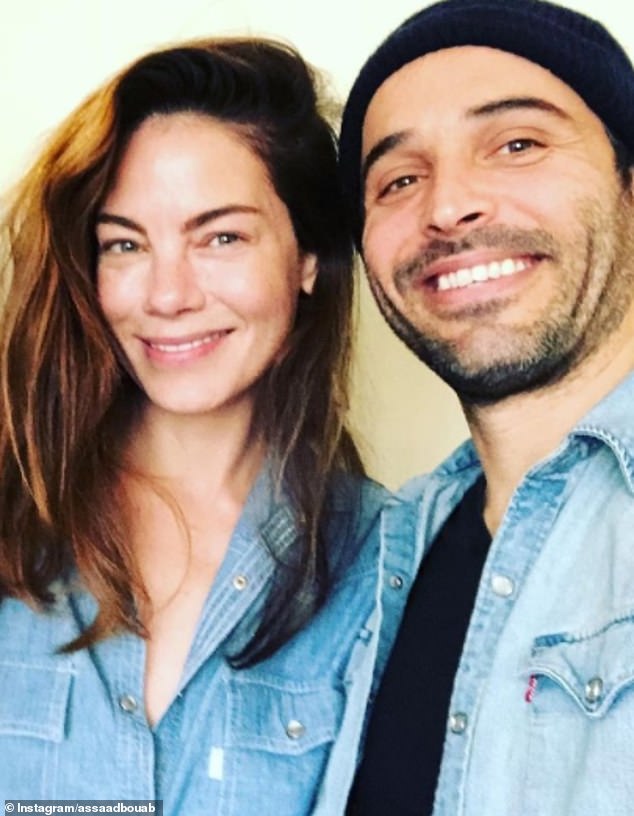 Co-stars: He starred opposite Michelle Monaghan, pictured together in an Instagram snap

But it is Call My Agent!, known in France as Dix Pour Cent, that has brought Assaad into the living rooms of British viewers. The actor plays dating-app entrepreneur Hicham Janowski.

The comedy, following a celebrity talent agency in Paris, featured a string of cameos including Juliette Binoche, Isabelle Huppert and Sigourney Weaver.

It originally aired on the public France 2 channel before finding global success on Netflix.

Creators are cashing in on the show’s popularity by announcing a surprise fifth series, as well as a film. A UK version of the show is also in the works.

Assaad said the cast has not been part of the discussion.

‘We have this Whatsapp group, between all the actors of Call My Agent!, and no one had heard about this. So let’s see. Fingers crossed. Maybe,’ he said. 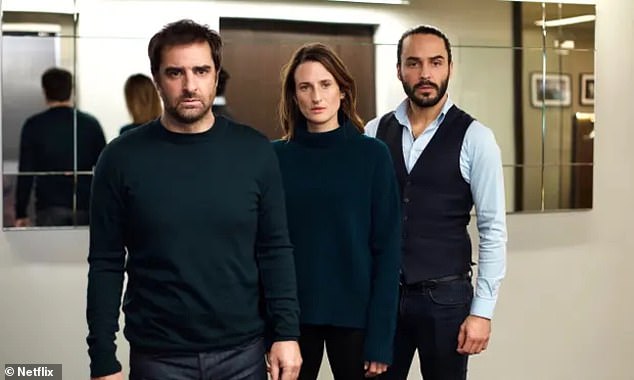 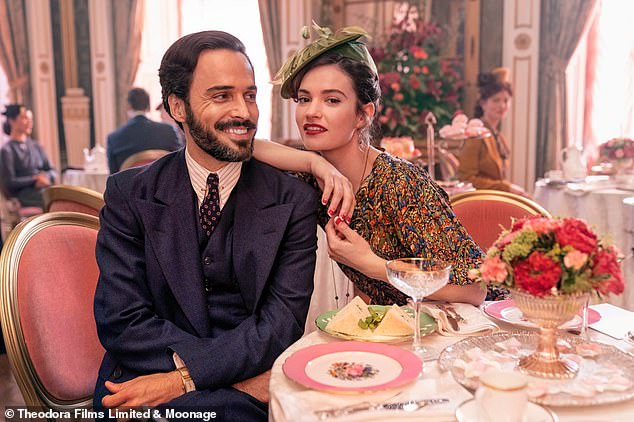 Nervous: Assaad admits he was worried about starring in The Pursuit Of Love with Lily James

But despite his decades of experience, Assaad said he was still intimidated by The Pursuit Of Love set.

‘I was a bit nervous to be part of The Pursuit of Love… with all those great actors and actresses,’ he said.

‘I was shaking, I was nervous. And the challenge for me is like: “OK, let’s try to be as much as I can self-confident and to try to be Fabrice. But it was not easy at all”.’

His first scene with co-star Lily, 32, was their sex scene, which Assaad described as ‘electric’.

The BBC production used an ‘intimacy co-ordinator’, Elle McAlpine, to choreograph the love scenes. She had previously worked on the BBC’s costume drama Gentleman Jack.

Bouab said Miss McAlpine made things more simple for him. ‘All the questions can be asked. There’s no shame. And we ask, “OK, what can we do? How far we can go here etc?” So it makes the thing easy, in a way. It’s funny.’ 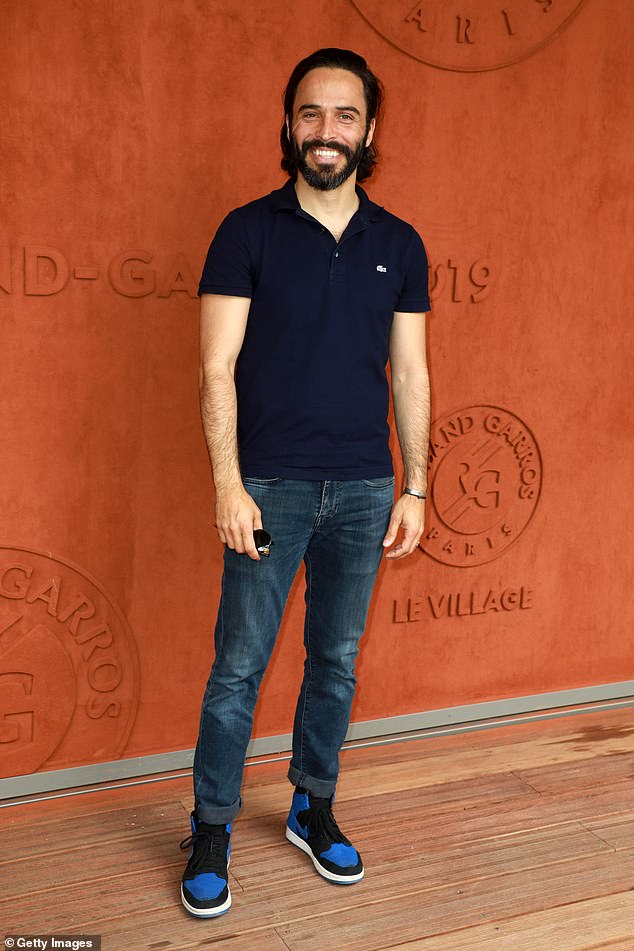 Revealed: The French politician who inspired the Duc de Sauveterre 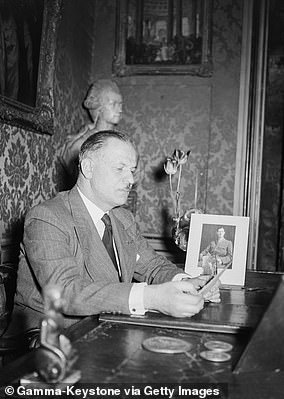 The Duc de Sauveterre is a character which author Nancy Mitford based on her love affair with Gaston Palewski.

A French politician, he was a close associate of General de Gaulle and an Anglophile who attended both Oxford University and the Sorbonne. Mitford dedicated The Pursuit Of Love, written in 1945, to him.

He was a notorious womaniser and had an affair with Mitford which started in the 1940s and continued on and off until her death in 1973 – the writer lived in Paris and then Versailles in the post-war years.

During that time he married a French duchess and another woman and had a child out of wedlock.

The character of the duke also appears in her 1949 novel Love In A Cold Climate.

The final episode of The Pursuit Of Love – which is set between the two world wars and follows Miss James’s character in search of the ideal husband – airs on BBC1 next Sunday night. The whole series is also available to watch on iPlayer.

Actor, assa, love, of, pursuit, the
You may also like: