You didn’t hear it from me, but DeuxMoi is about to level up. The celebrity gossip Instagram account that has amassed 1.5 million followers has a spin-off novel in the works and a TV adaptation on the way, too.

HBO Max announced the news this week that it’s producing a one-hour drama series based on Anon Pls, the upcoming book co-written by DeuxMoi and They Wish They Were Us author Jessica Goodman. 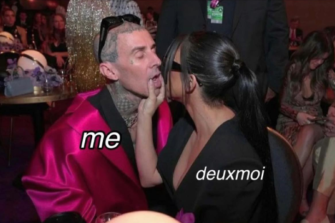 The book is based on the creator’s experiences of running the account, which has shared salacious goss such as Kim Kardashian and Kanye West getting divorced and Ben Affleck and Jennifer Lopez reuniting.

The news of the TV adaptation comes four months after the account also launched its own weekly podcast, Deux U, and a couple of years since it rose to prominence sharing unverified stories about the rich and the famous, and revolutionising the way we engage with celebrity gossip in the Instagram age.

Wait. Who is DeuxMoi?

That’s a great question! In fact, it’s one only a handful of people in the know could answer. Despite the account’s huge following on Instagram, the creator of DeuxMoi is still anonymous.

She – we know it’s a woman in New York – has been likened to a real-life Gossip Girl, and first attracted attention in 2020 for her account which shares unsubstantiated rumours about celebrities’ private lives and general gossip about pop culture.

In a Vanity Fair profile last year, the DeuxMoi creator said the project essentially began because she was bored in lockdown. One day, she asked her followers from an old style blog she ran if they had any first- or second-hand celeb stories, and then started posting screenshots of the resultant DMs. This included a story about Leondardo DiCaprio’s sex life and a message allegedly from one of Jonah Hill’s exes – and it all rolled on from there.

With everyone stuck in their homes, increasingly distressed by the news and desperate for distraction, DeuxMoi became one of the most exciting places on the internet. And it’s been on the rise ever since.

DeuxMoi is similar to traditional gossip magazines in many ways. It posts candid shots of celebrities spotted on the street or in cafes and wildly speculates on their relationships. But the big difference is that everyone can easily get in on the action.

The pictures don’t come from paid paparazzi and the rumours aren’t necessarily spread from “sources close to the couple”. Users can send in stories they heard from friends of friends or theories they’ve come up with after doing a deep dive on someone’s Instagram.

If the account’s creator finds it interesting, the content is then posted on DeuxMoi’s stories, most often anonymously – and always without any independent verification.

The fun of DeuxMoi is in the wild speculation. But also the fact it often turns out to be true.

DeuxMoi followers were some of the first to hear about the fact Harry Styles and Olivia Wilde were dating, for instance. The account was flooded with news and rumours about Kim Kardashian and Kanye West’s divorce well before it was publicly announced. And it also accurately predicted parts of the Armie Hammer saga.

Thanks to some savvy tipsters, DeuxMoi followers got the drop that the actor had been let go by his agent and booted from an upcoming film. Followers spent days speculating on the reasons that might be and sharing rumours.

The account has its critics. Some have concerns about its disregard for celebrities’ privacy: it’s one thing to have paparazzi and known gossip writers, but another to have a global network of active contributors reporting on people’s locations in real-time.

Others take issue with the account’s lack of accountability or interest in what is and isn’t true.

Does it matter that both the creator and their sources are anonymous? Is there a line in what should and shouldn’t be reported on or speculated about? And does it change anything that the account now has a greater following than some major media publications?

It’s easy to give kneejerk responses to these questions, but much harder when you consider the relationship traditional tabloid mags have with the truth. Despite at least two decades of reports claiming otherwise, for instance, no, Jennifer Aniston is not pregnant.

What to expect from the novel and TV show

It tells the story of a stylist’s assistant named Cricket Lopez who starts a celebrity gossip Instagram account on a whim, which then blows up overnight.

“As the account grows and becomes more and more famous,” the description reads, “she has to wonder: is it – the fame, the insider access, the escape from real life – really worth losing everything she has?”

The DeuxMoi creator, on the other hand, seems to have everything in place. Though she’s always been wary of naming herself due to fear of losing her job, with a podcast, book and TV adaptation in the works DeuxMoi will be well on its way to turning a steady profit.

One day soon she might step forward, becoming a celebrity in her own right.