The TikTok doctor with four million patients: Psychologist Dr Julie Smith’s simple self-help videos have struck a chord with pandemic-weary Britain – and turned her into a social-media powerhouse

The psychologist and bestselling author Dr Julie Smith, 37, still remembers the morning she woke up to find herself a TikTok phenomenon. She had posted a 60-second video of herself saying: ‘Depression is not always crying endlessly in dark rooms. Depression can be getting up, going to school or work. Smiling at all the relevant people and doing all the things you’re supposed to do while feeling empty inside.’ It had, as they say, gone viral: ‘It was like a rocket taking off and I was grabbing on for dear life.’

It’s more than two years since she started posting these inventive self-help snippets, having come up with the idea on a sun lounger in Spain in 2019. She is now a global star with over four million followers: 3.4 million on TikTok, 838K on Instagram and 414K on YouTube. The social-media success, which hit a month before the first lockdown, was followed by her bestselling book, Why Has Nobody Told Me This Before? This spent 18 weeks at number one in The Sunday Times Bestsellers List since coming out in January, has sold 150,000 copies and been published in 36 countries, from the US to Australia.

In March, Dr Julie ‒ as she is known to her fans ‒ appeared on This Morning, replicating some of her most popular videos: filling a container of water with drops of colour (as pictured on this page) to show the positive cumulative effects of tiny acts of self-care; rubbing ice on her wrists to show how reducing body temperature can quickly bring down strong emotions (dunking your face in a bowl of iced water is good if at home), and drilling holes in an overflowing ‘stress bucket’ of water to explain the importance of having release valves. 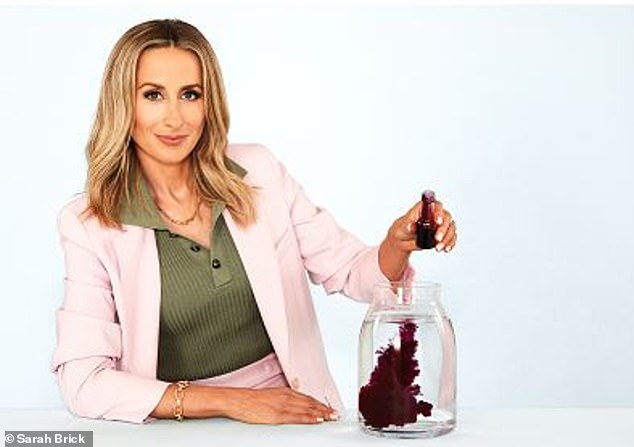 Dr Julie Smith (pictured) remembers how she woke up to find herself a TikTok phenomenon. The 37-year-old psychologist posts inventive self-help snippets to her followers

Dr Julie is pragmatic about the techniques she teaches. ‘It’s not rocket science. It’s quite simple if people learn the skills. They shouldn’t have to pay to see me to learn this basic stuff. It shouldn’t be hidden behind therapy doors.’

Everything she says is backed up by science and experience (a doctorate in clinical psychology, ten years in the NHS and a private practice, too) but it is the way she communicates that is so original. One video, for example, sees her hitting a china plate with a large hammer. ‘This is you, this is your life!’ she says, smashing it to bits. ‘Sometimes life does that, right? Sometimes we get chips and cracks.’ Her message? Nobody is perfect. We have to glue ourselves back together. In another, to indicate the cumulative effects of stress, she over-inflates a pilates ball, before sitting on it, at which point the thing bursts and she falls to the floor The message? ‘Everyone has a breaking point’.

She began posting on TikTok and Instagram because she particularly wanted to reach young people, which became especially relevant when the pandemic hit. A quest for fame never came into it. ‘At no point did I have ambitions to be a public person,’ she says. ‘I’m shy and introverted. I see one person at a time [socially] and I live a small-town life, even now.’ 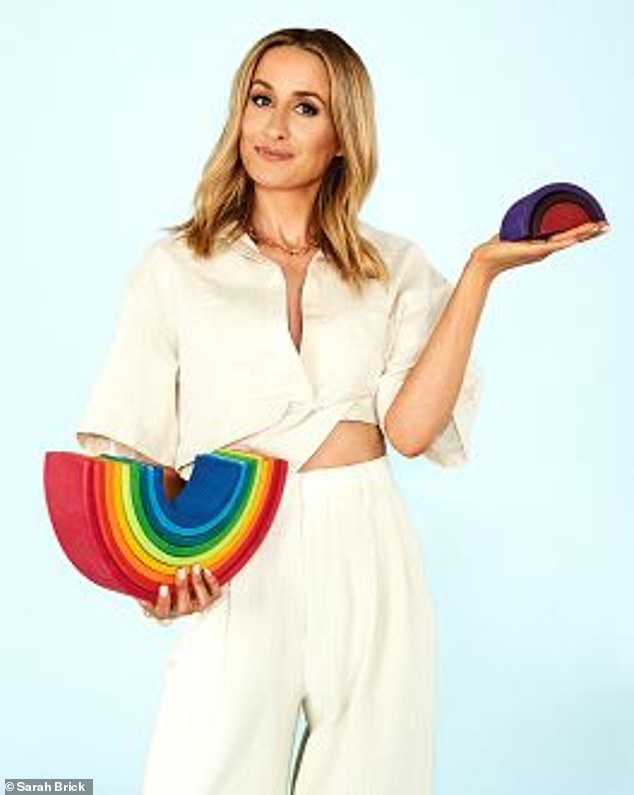 Dr Julie’s TV and TikTok appearances mean her looks are scrutinised. She doesn’t like it but accepts the situation and deals with the additional pressure by distancing herself

Today, I meet Dr Julie in a café in Ringwood, her much-loved childhood ‘small town’ in Hampshire. It is where she has lived, with her two sisters, since she was seven years old, raised by parents who ‘come from humble beginnings and who worked very hard to give me the opportunities neither of them had’. It’s where she returned after completing her degree in psychology at Exeter University – she was the first in her family to go into further education – and it is also where she met her best friend, Matthew Smith, aged 12, at the local school. Ten years later, they finally got together at a party after a decade of will they/won’t they? – ‘we joke that it took him ten years to bag me’.

Netflix or night out? Netflix

She stayed in Ringwood to be with him while studying for her clinical psychology doctorate at Southampton University, and at 28 married him. A year later they started a family, juggling her NHS clinical work and motherhood with a lot of help from grandparents. She now has three children, daughter Sienna, nine, and sons Luke, seven, and Leon, three.

Until she went viral in February 2020, she treated patients in the therapy room at the bottom of the garden (built by Matthew) while Matthew worked for his family’s local property business. Being a good mum still matters most – albeit one who now gets followed by teenage admirers. ‘My daughter noticed them. I had a selfie with them,’ she says of a recent fan-girl episode in the local supermarket.

Dr Julie’s TV and TikTok appearances mean her looks are scrutinised. She doesn’t like it but accepts the situation and deals with the additional pressure by distancing herself. ‘The videos aren’t about me,’ she says, ‘so I deal with the fact that I don’t look like a model because that isn’t what I am there for. Each video had a clear message.’ (Actually she does look pretty damn good, her slim physique honed by runs in the nearby forest which also, she says, stave off stress.)

She’s at pains to point out that she’s no different from the rest of us. ‘I’ve never wanted to give the impression that I’m all sorted and perfect. There are days when I’m buzzing with ideas and it feels great, and also evenings when I’m trying to work and feeling grumpy. There have been plenty of times spent filming when it’s felt like a grind.’

Filming happens between 8pm and midnight, once she’s put the last child to bed. She goes to her room, changes her top – ‘covered in children’s food’ – and puts on her make-up. Videos used to be recorded on her phone in the garden therapy room, but now it is filming with Matthew in a spare room, with proper kit and script. Despite this more professional setup, however, she never wants to forget why she’s doing it. ‘I don’t want to get lost in the whole circus. I only want to do things that are useful.’

Her marriage, she explains, has been crucial to her success, not only because of Matthew’s entrepreneurial ‘go, go, go’ spirit. ‘It’s probably presumptuous to say that our marriage is unusual but because we have been best friends since we were 12, we have this firm foundation that sits under everything. We know each other so well. There have been many times along the way with the videos when he will pull me up, and there were times when he was exhausted, too. We have completely different strengths. I am the psychology talker – the words person – and he is the one who wants to push what I achieve even more.

‘He has also protected me from getting worried about comments online because he looks at that stuff without me having to. At the beginning, when he first suggested social media as a way of reaching the people I wanted to reach, I said, “No way! I’ll be laughed and trolled out of there!”’ 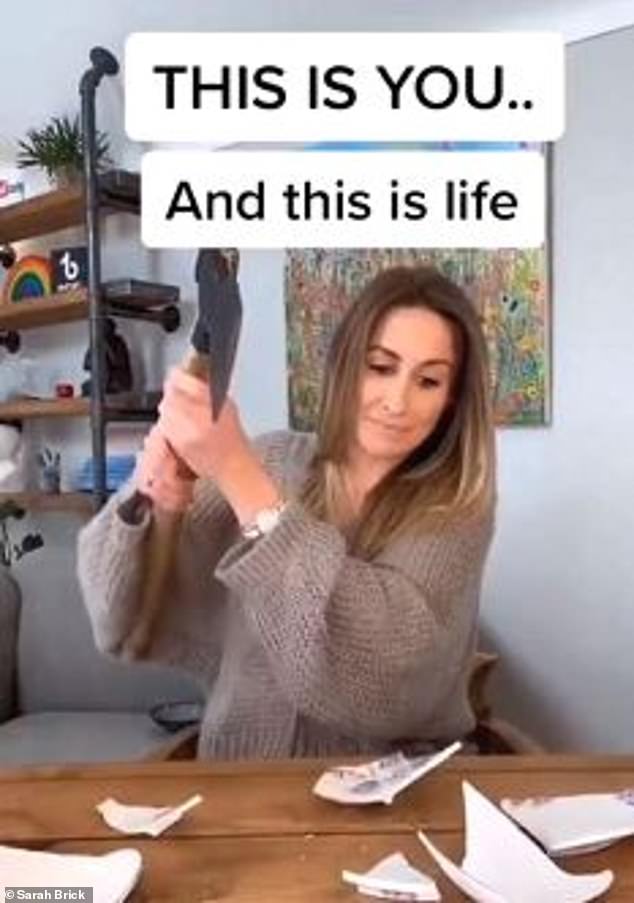 There have been her own anxieties to manage, too. One has been working on the book during lockdown while Matthew home-schooled their children. Her deadline was May 2021, a high-stress period during which she found it difficult to sleep, but which was worth it now, she says, for the book’s global reach, and the many messages she gets – as well as her daughter’s pride. ‘I recently heard my daughter say to one of her friends: “My mummy has three million TikTok followers!”’

Another early anxiety was what her NHS colleagues would make of it all. A TikTok psychologist? It had never been done: ‘That was my biggest resistance, a point of real vulnerability for me. I don’t know what criticism I anticipated, but it just didn’t come. Quickly, colleagues were messaging me to say thank you, that they were letting their patients know because the videos were a source that could be trusted. It was not only the biggest relief but also the biggest compliment.’

HOW TO AVOID MENTAL MELTDOWN

There is a disclaimer on the social media videos that Dr Julie can never engage in individual problems through direct messaging. ‘It is an ethical consideration.’ Despite that, there was the inevitable flood of online requests to see her, which she declined in the interests of privacy. ‘It’s because I’m still practising in my garden, but only with my existing patients. I think I will have to rent an office, but I haven’t navigated that one yet.’

And, of course, what about all those friends on the school run or at dinner parties, now the world has opened up again, who want advice about their children and their relationships? ‘To a degree, that has always happened,’ she says. ‘Once people find out what job you do… there’s probably a bit more of it now. It might be their relationships or concern over burnout, perhaps. My response depends on the person and the situation. With a close friend, I can get into it [a bit more], but often people are coming to me with a summary of a problem for a bit of guidance, asking me questions like, “Am I doing the right thing with this?” or “Does this warrant going to therapy?”’

Even though everyone wants a piece of Dr Julie, she and Matthew are learning to factor in recovery time. Weekends often involve children’s activities – tennis, football, movie nights – as well as camping trips. They are also aiming to socialise more this summer. When the book was published – on the cusp of its success – Matthew told her the children were waiting for her in the therapy room with a banner and a card. But there was a surprise: ‘It was around 30 of our best friends, who we’d known all our lives, genuinely happy for my success.’ Her book is dedicated to Matthew: ‘If mine is the ink then yours is the paper. Like all our adventures, we got there together.’

Small-town girl maybe, but one who is hitting the big time.

THE POWER OF #BOOKTOK

With over 55 billion views, #BookTok is one of TikTok’s most popular sub-communities. Avid readers use this part of the platform to share their book recommendations, reactions and reviews in 60-second (or less) videos. Their collective enthusiasm drives the sales of millions of pounds’-worth of books, and last year UK booksellers saw their most lucrative yet, with over 212 million print books sold.

The algorithm of the For You Page allows everyone on TikTok to find a niche they’re interested in and the #BookTok community is driving sales across genres such as personal development, romance, fantasy, sci-fi and crime.

No other social-media platform seems to move copies the way the video-sharing app does, and the industry is adapting accordingly. Waterstones, which now has a section on its website dedicated to the books ‘Everyone’s Tik-Talking About’, is seeing huge sales and busy stores. ‘BookTok is wonderfully positive, creating excitement around a rapidly evolving list of titles,’ says Waterstones’ managing director James Daunt. ‘They are discovered on BookTok but experienced and bought in bookshops.’