There’s just one thing missing from this Poltergeist update

Come Play is a descendant of Poltergeist, the 1982 Spielberg production about a family terrorised by a ghost that comes through their television screen.

This film presents an updated model. Its tech-savvy phantom is a gangly, skeletal creature called Larry who can colonise any screen he comes across. He’s also very lonely and wants Oliver (Azhy Robertson), an equally solitary eight-year-old with autism, to be his new best friend. Predictable domestic chaos ensues. 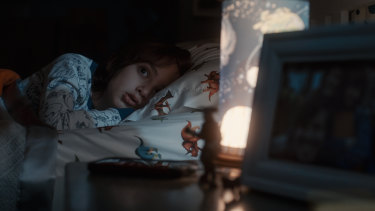 The film is a first feature from writer-director Jacob Chase, who’s been a horror movie enthusiast since childhood and it’s produced by Spielberg’s company, Amblin, who went for the idea after Come Play’s spectral lead featured in Chase’s short film, Larry.

Larry appears initially in a storybook that suddenly pops up on Oliver’s tablet. Then he creates some introductory mayhem by causing the lights in the house to flicker and fuse while furniture is tossed around the room. This alerts Oliver’s mother, Sarah (Gillian Robinson), who’s already depressed because Oliver’s father, Marty (John Gallagher Jr) leaves her to make all the difficult parental decisions.

Add in a trio of school bullies who are devoting themselves to making Oliver’s life even more miserable and you have a scenario so familiar it would take a lot more than Larry’s electronic wizardry to pump new life into it.

In the 1980s, when Spielberg embarked on his own flirtation with horror, he had his collaborators, Joe Dante and Chris Columbus, mix it with black comedy. They set up a conspiracy with the audience – a state of mutual understanding that acknowledged the story was pretty silly. Nonetheless, it was worth indulging because there was so much fun to be had along the way.

Chase takes his story much too seriously to entertain that proposition. It’s suffused with an atmosphere of dogged naturalism, rooted so firmly in the everyday that fun might well be a foreign word. Sarah and Marty’s marital problems are as central to the plot as Larry himself yet it’s hard to be fascinated by them.

Marty is a man-child who enjoys playing with Oliver, rejoicing whenever he can make him smile, but he would rather take another night shift at the car park where he works than face the fact his son can’t or won’t talk. It’s Sarah who takes him to the speech therapist and deals with his school problems.

Larry is a towering puppet with CGI enhancements and Chase wisely keeps him under wraps until the plot is well under way, offering only fleeting glimpses of his spindly limbs and skull-like countenance.

Even so, only the naturally susceptible will find him terrifying. Nor does anyone here prove to be likeable or compelling enough to conjure up the poignancy needed to make the ending work.