Near cinematic perfection! Tom Cruise is on fire in Top Gun: Maverick, joining the ranks as one of the greatest action movies of all time

As the final credits roll at the end of Top Gun: Maverick, something quite beautiful happens.

The sky turns to a familiar orange, a single plane flies through the frame and the words ‘In Memory of Tony Scott’ appear on the screen, honouring the director of the much loved 1986 original, who committed suicide in 2012.

It’s an immensely touching moment, a moment of near cinematic perfection, in fact. But it’s also an instant reminder of how extraordinarily good and wonderfully enjoyable the previous two hours have been.

Yes, there’s a big plot steal from Star Wars but it makes not a jot of difference. Top Gun: Maverick, starring Tom Cruise (above), is better than the original

Yes, there’s a big plot steal from Star Wars but it makes not a jot of difference. Top Gun: Maverick is better than the original, one of the best sequels I’ve ever seen and, quite simply, one of the best action movies ever.

It works on so many levels. The flying sequences are stunning, sound and photography top-notch, editing and pacing truly outstanding, but this is also a thriller with real heart.

The unavoidable absence of Goose (played by future ER star Anthony Edwards in the original) is there from start to finish, his angry moustachioed son – codename Rooster and played by the excellent Miles Teller – has a pivotal role to play, and when the cancer-stricken Val Kilmer returns as Iceman… well, let’s just say it’s emotional.

Yes, it’s a shame there’s no mention of Kelly McGillis’s character, Charlie, from the first film, but Jennifer Connelly steps up decently as the love interest – the inevitably beautiful single mum – and at least there’s a female pilot this time around.

It’s a shame there’s no mention of Kelly McGillis’s character, Charlie, from the first film, but Jennifer Connelly (above) steps up decently as the love interest

Monica Barbaro is quietly effective as Phoenix, one of a dozen class-winners – ‘the best of the best’ – who return to the US Navy’s fighter weapons school, aka Top Gun, to face selection for a hugely dangerous secret mission considered nigh on impossible.

But Top Gun is, of course, a Tom Cruise film, and from the moment he dons that iconic leather jacket, grabs the aviator sunglasses and climbs on to the instantly recognisable motorbike, we know we’re in safe hands.

Pete ‘Maverick’ Mitchell may not say he ‘feels the need, the need for speed’ these days, but he clearly hasn’t changed.

That’s why he’s test-piloting a secret plane supposedly capable of flying at ten times the speed of sound as the film begins, and why he’s pretty swiftly straight back at Top Gun when things don’t quite go according to plan.

Maverick by call-sign, maverick by nature. This time around, however, he’s not there to fly, he’s there to teach. Last chance.

Love him or otherwise, Cruise is excellent here, and not just on the screen.

He brings in regular collaborator and Mission: Impossible veteran Christopher McQuarrie to join the team as co-writer and producer, while director Joseph Kosinski, who worked with Cruise on Oblivion and with Teller and Connolly on Only The Brave, sees his career jump several big steps up that slippery Hollywood ladder.

From the first discordant bell of Harold Faltermeyer’s instantly evocative Top Gun anthem, this long-awaited sequel is a joy. To paraphrase one of its favourite lines: ‘Don’t think; just go.’ See it on the biggest screen you can find.

Released with immaculate timing is Lancaster, a documentary from the same team that brought us the excellent Spitfire four years ago and which serves as a powerful real-life counterpoint to Maverick and his flying aces. 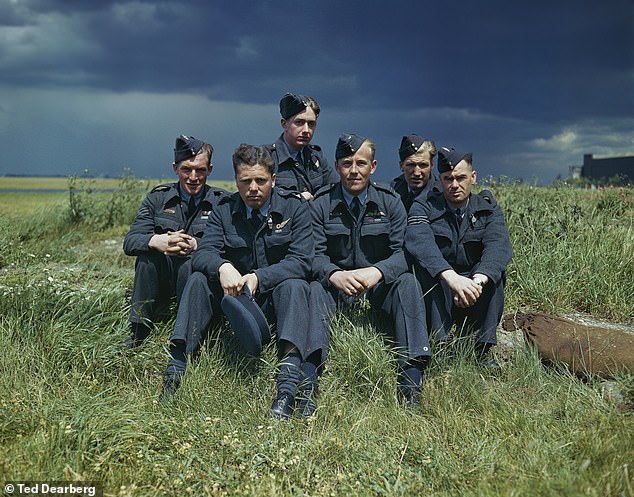 The daring Dambusters raid of 1943 – carried out by 19 Lancaster bombers – was unarguably the Top Gun mission of its day. Above: Some of the Dambusters squadron

After all, the daring Dambusters raid of 1943 – carried out by 19 Lancaster bombers – was unarguably the Top Gun mission of its day.

Co-directors David Fairhead and Ant Palmer assemble an insightful and articulate group of veterans – most of them now in their mid-90s – to tell the story of the Lancaster bomber and its contribution to the Second World War.

But as well as telling a fascinating story, they get the all-important tone just right, certainly marking the bravery and skill of the aircrew but also quietly acknowledging that the raids of Bomber Command remain a sensitive issue almost eight decades on.