More than 30 years since he first appeared on Radio 4’s On The Hour, Alan Partridge is now so enmeshed in the national comedy fabric, there’s no longer any need to mention his creator Steve Coogan in the show’s title.

Since he last toured in 2008, Partridge, right, has bucked the hit-sitcom-to-dismal-feature-film trend with his movie Alpha Papa, and diversified with TV specials, new series and even a documentary, but still we can’t get enough of the blissfully deluded cringe-meister.

Now he’s back with a whole show to himself in Stratagem, a life-coaching seminar incorporating musical bombast, dancing girls, poetry, Hamilton-inspired rapping, epistolary storytelling and, er, time travel, all courtesy of the show’s purported sponsors, P&O and Bet365. 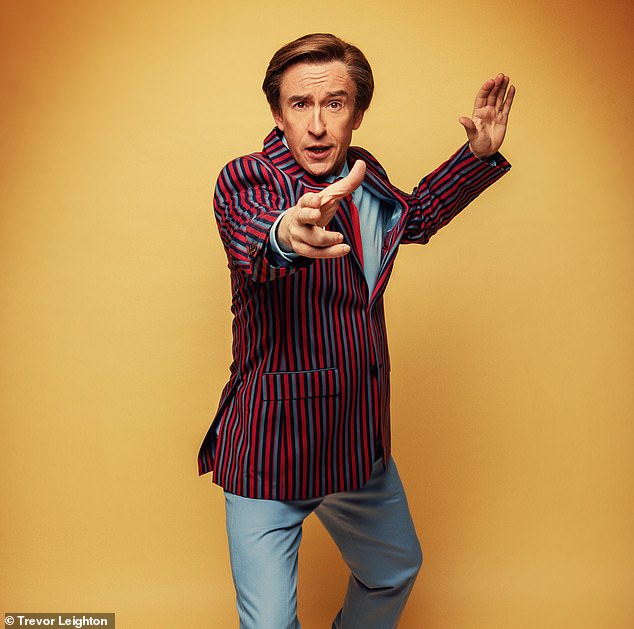 We still can’t get enough of the blissfully deluded cringe-meister Alan Partridge (Steve Coogan, above), and Stratagem is as mad and chaotic as it sounds

Yes, it’s as mad and chaotic as it sounds.

Oh, and there’s one astounding sight gag in which Alan, disguised as part of the set, erupts from his hiding place like a marauding transformer built from soft furnishings. Entirely, stupidly brilliant!

At times the show comes on like Partridge The Musical, and is all the funnier for it.

The set is aptly over the top with metal ladders, an elevated walkway and a giant screen on which Alan interacts superbly with long-suffering PA Lynn (Felicity Montagu) and Irish farmer/rebel singer Martin Brennan (Coogan), breakout star of This Time With Alan Partridge.

We are also treated to grotesque close-ups of a gurning Partridge via a hand-held camera.

Clad from head to foot in shimmering white, he cuts a messianic figure, at odds with the mundanity of his maxims: ‘Grab life by the throat and throttle it.’

In this age of cancel culture he must have his say: ‘In these gender-sensitive times, you can’t say “tits-up”, but you can say “cock-up”. Interesting!’

A bolted-on romantic sub-plot and the odd clunky moment do nothing to distract from what is two hours of pure, unadulterated Partridge. And, as he croons his way through a medley of 1980s power ballads, that is more than enough.