Former prime minister Malcolm Turnbull says his former attorney-general, Christian Porter, should disclose who paid his legal fees for a defamation case against the ABC or “give the money back”.

Mr Porter declared to Parliament on Monday that he did not know who ultimately paid part of his legal fees for his defamation action against the national broadcaster and its reporter Louise Milligan. 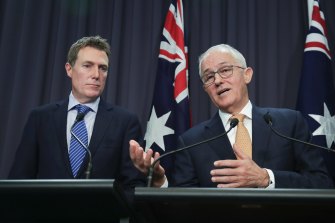 Former prime minister Malcolm Turnbull (right) says his former attorney-general, Christian Porter, (left) seen in a 2018 file picture when both were still in those positions, should disclose who paid his legal fees for a defamation case against the ABC Credit:Alex Ellinghausen

He said a part contribution to his fees was made by a blind trust known as the “Legal Services Trust”, noting he had “no access to information about the conduct and funding of the trust”.

Mr Porter sued the ABC for defamation in March over an online article he alleged portrayed him as the perpetrator of a rape in 1988. He denies the allegation and the case was settled in May.

Mr Turnbull, who fell out with Mr Porter in the final days of his prime ministership, revealed earlier this year he had been contacted by the woman who made the allegations against Mr Porter.

Following the airing of the allegations by the ABC he called for a coronial inquest into the woman’s death and controversially raised questions over her suicide.

He told ABC radio on Wednesday that Mr Porter’s declaration was like saying, “My legal fees were paid by a guy in a mask who dropped off a chaff bag full of cash.”

Mr Turnbull said the decision to allow an anonymous donation to cover some of his fees was “a shocking affront to transparency”.

“Now this flies in the face of every principle of transparency and accountability in public life,” he said.

“You can’t make anonymous cash donations to political parties; it’s against the law. I am staggered that Porter thought he could get away with it and I will be even more staggered if the Prime Minister allows this to stand.”

Mr Turnbull said that, if Mr Porter did not know the identity of the donor, then he should not accept the money.

A spokesman for Mr Porter said on Tuesday, “The minister has undertaken disclosure in accordance with the requirements of the register and consistent with previous members’ disclosure of circumstances where the costs of personal legal matters have been mitigated by contributions or reductions in fees.

“No taxpayers’ funds were used in meeting the costs of the minister’s actions against the ABC and Milligan, which have now concluded.“

Labor and the Greens want Prime Minister Scott Morrison to demand his cabinet minister find out who donated to the fund and publicly disclose that information.

Shadow attorney-general Mark Dreyfus said on Tuesday that Mr Porter claiming not to know who had funded his legal fees was an “outrageous abuse of his office”.

Mr Porter said in his declaration that he had declared the arrangement “although these matters have been conducted in a personal capacity and all legal services were engaged in a purely personal capacity, out of an abundance of caution and consistent with approaches adopted by other parliamentarians in relation to the provision of reduced fee or pro bono legal services”.

“Although all of the above contributions were made to me, or were for my benefit, in a purely personal capacity, in the interest of transparency and out of an abundance of caution I make this disclosure,” he wrote.