Unions say ‘chance’ of agreement with business on migration

Australian Council of Trade Unions secretary Sally McManus says there’s a chance of an agreement being hatched on migration, one of the sticking points ahead of the jobs summit, as the labour movement and business groups strive towards resolutions in the lead-up to the event.

The ACTU wants the yearly permanent migration cap lifted from 160,000 to 200,000 places, subject to a range of conditions, while business leaders want it to rise to between 200,000 and 220,000 places for a two-year period as a shot in the arm for worker-strapped industries. 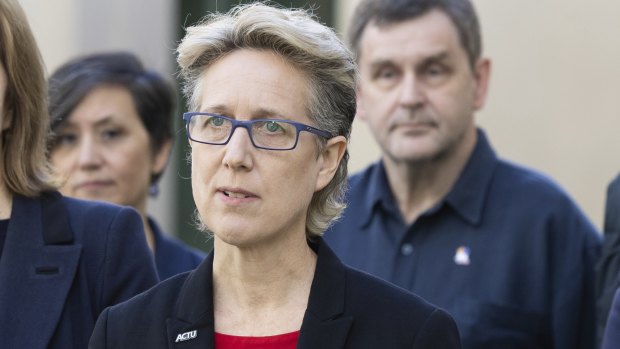 Speaking at Parliament House on Wednesday ahead of the two-day summit, McManus said she believed “there is a high likelihood of very strong agreement on some very key issues in our country, especially to do with skills and to do with equality”.

“There’s a chance of agreement, but we don’t yet know on the issue of migration. And we need to go forward on the issue of collective bargaining, and I reckon that’s very, very positive for our country,” McManus said.

Australian Chamber of Commerce and Industry head Andrew McKellar said earlier this month he wanted the permanent migration intake raised to 200,000 at least for the next two years to address the nationwide staffing crisis, a similar position to the Business Council of Australia, which wants up to 220,000.

Speaking to ABC’s Insiders program on Sunday, BCA chief executive Jennifer Westacott said the purpose wasn’t to focus on a number, but on the particular skill-sets Australia would need to enhance the economy, such as those in decarbonisation, defence technology and manufacturing.

“We will need to bring in the best and brightest people from around the world to come in and transfer their knowledge and drive innovation,” she said, adding that she and McManus agreed migration should be longer-term rather than relying on two-year working visas.

“I think we’re all on the same page on that. And then, of course, making sure the skills system works properly.”

Asked about Westacott’s suggested migrant intake of 220,000, McManus told the program, “well, we’ve said a bit less than that, but you know, around the same figure”, adding permanent migration was more conducive to the long-term goal of increasing wages.

On Wednesday, ACTU president Michele O’Neil said the union believed there was agreement on shifting the system back towards permanent migration.

“We’ve got a great history in this country of permanent migrants coming here and making an enormous contribution as they stay, and their families stay and grow up in this country. That’s the balance sheet we want to see go back, and we also want to make sure that we stamp out exploitation,” she said.

In agreeing to an increase in the migration cap, the ACTU wants to see the abolition of visa conditions that tie workers to a single employer, replacing single-employer sponsorships with industry-wide arrangements to address legitimate skills shortages, and lifting the minimum salary for temporary skilled workers, so they’re in line with average fulltime earnings.