Unions claim Qantas has underpaid many of its workers more than $10,000 each by subsidising their overtime payments with the government's JobKeeper scheme.

The Australian Services Union, Transport Workers Union and Flight Attendants' Association of Australia are among a coalition that will on Wednesday seek leave to appeal a landmark court judgment on how JobKeeper works to the High Court. 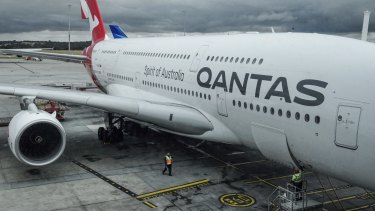 Qantas unions say workers have been underpaid more than $10,000 because of how Jobkeeper has been applied. Credit:Paul Rovere

The case has broader implications for the government’s JobKeeper scheme because it could force some companies to pay staff more in overtime and penalty rates.

The unions won their legal challenge to the way Qantas applied JobKeeper payments in the Federal Court in September before the case was overturned on appeal last month.

The Business Council of Australia – which lobbied the government to change the JobKeeper rules after Qantas unions won the initial case – said December's appeal win had been a "great relief to many businesses across the economy" that paid JobKeeper according to ATO advice.

"It is disappointing that these arrangements have again been thrown into uncertainty by this appeal [to the High Court]," a BCA spokesman said.

Many Qantas staff are paid their regular wages in one fortnight and any overtime in the next, under a long-standing practice that in effect splits the airline’s wage bill across two JobKeeper fortnights. But if they are stood down or don't work in the second fortnight, their overtime payments have been partially or fully absorbed into their JobKeeper payment for that fortnight.

The unions argue workers should instead receive the full value of the overtime they worked as well as the JobKeeper payment in the fortnight they don't work.

Union modelling based on a real customer service worker’s roster shows they would be about $12,000 worse off over the full year of JobKeeper compared to if overtime had been paid in the fortnight it was earned.

ASU official Emeline Gaske said it was "unconscionable" that Qantas had "pocketed money that should be paid to workers for overtime and penalties".

"Qantas should be treating its workers with respect and pay them what they deserve – not wasting money on lawyers to find tricky ways to get out of paying their workers properly," she said.

A Qantas spokesman said unions were "wasting their members' money and our money on continuing this legal action during the middle of a crisis".

The airline paid JobKeeper according to advice from the Australian Tax Office, he said, while work rosters during the stand-down period were done in consultation with unions.

"We have always paid penalty rates and overtime in the same way, this is not something we just started doing during COVID," the spokesman said.

Qantas received more than $267 million in JobKeeper payments in the first three months of the scheme to subsidise wages or go directly to workers who were stood down without pay.

The airline has been financially devastated by COVID-19, which forced it to ground most of its fleet last year, while the recovery in domestic demand has been slower than expected due to state border closures. It stood down about two-thirds of its staff when the pandemic first hit and has since laid off about 8500, or close to a third of its workforce.

Qantas is also facing legal challenges from unions relating to stood-down workers being unable to access sick leave and its recent decision to outsource all ground-handling work.

Cou, high, Qantas, take, to, Unions
You may also like:

Foo Fighters Get Into the Groove on Blissfully Concise ‘Medicine at Midnight’: Album Review