The proposed contract, revealed by this masthead last week, proposed a donor give $100,000 in payments to Catlin’s marketing business. The contract was never signed. 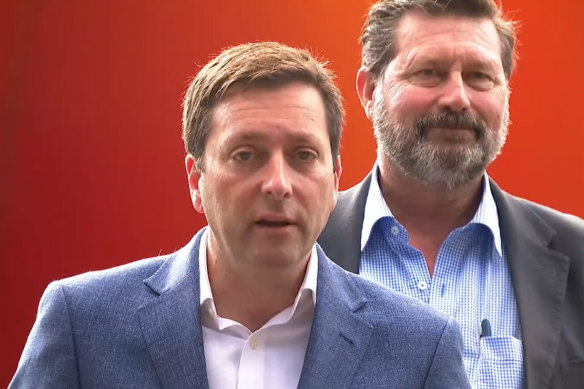 Matthew Guy speaks to reporters at a press conference in Wodonga on Friday.Credit:Nine News

Speaking from Wodonga this morning, on the NSW-Victoria border, Guy told reporters the contract was not drawn up at his request and he was preparing to send the material the VEC requested.

“Last night the electoral commission has commenced some preliminary work, and they’ve asked me for any documentation we have,” he said.

“I’ll comply and make sure we will deliver every stage, and every step.”

Guy said the VEC had asked for the “emails and any other documentation” that was provided to him relating to the matter.

“Nothing was advanced,” he said of Catlin’s proposed contract. Catlin resigned last week.

Three staff, including Catlin, have left Guy’s office in the past fortnight. The opposition leader said there were no vacancies in his office.

“When you have a change at the top, there are always changes,” he said.

Guy said he would not take lectures on integrity from the government.