Victoria’s powerful clubs lobby says both major political parties have assured it there will be no upcoming policy changes that eat into gaming machine revenue, despite a government crackdown on Crown Casino and pokie reforms in other states.

Andrew Lloyd, chief executive of Community Clubs Victoria – which represents pubs, clubs and RSLs but excludes Crown Casino – said he had received “letters of comfort” ahead of the state election from both Labor and the Coalition, supporting the status quo in the regulation of pub and club gaming.

This is despite recent data pointing to record pokie losses in Victoria for 2022-23 and warnings from gambling experts, federal agency Austrac and Crown itself that tougher rules for the casino alone would push problem gambling and money laundering in pubs and clubs.

“The major parties don’t want to change anything in this space,” Lloyd said. “They want to make sure the systems in place work.”

Premier Daniel Andrews and Opposition Leader Matthew Guy have butted heads about the powers of the state’s corruption watchdog during an otherwise mild-mannered leaders’ debate, the only one of the Victorian election campaign. 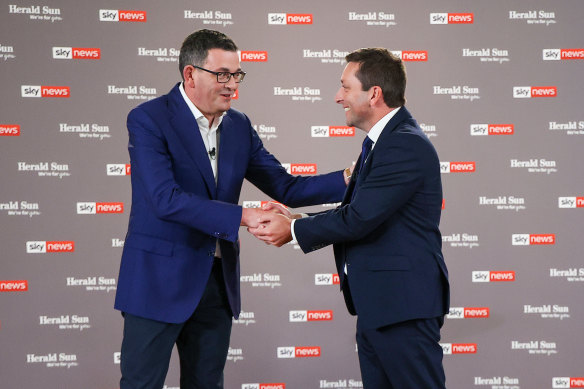 Consistent polls have placed Andrews in an election-winning position, but an exclusive survey conducted by Resolve Strategic for The Age has found the Coalition has closed the gap on Labor.

For much of the debate, Guy avoided engaging directly with Andrews, who seemed at times frustrated that the opposition leader would not argue back. It appeared a calculated attempt by Guy to appear the more sober leader.

The campaign so far

Good morning and thanks for reading our live coverage of the final week of the Victorian election campaign.

Here’s what you need to know before we start today’s blog: