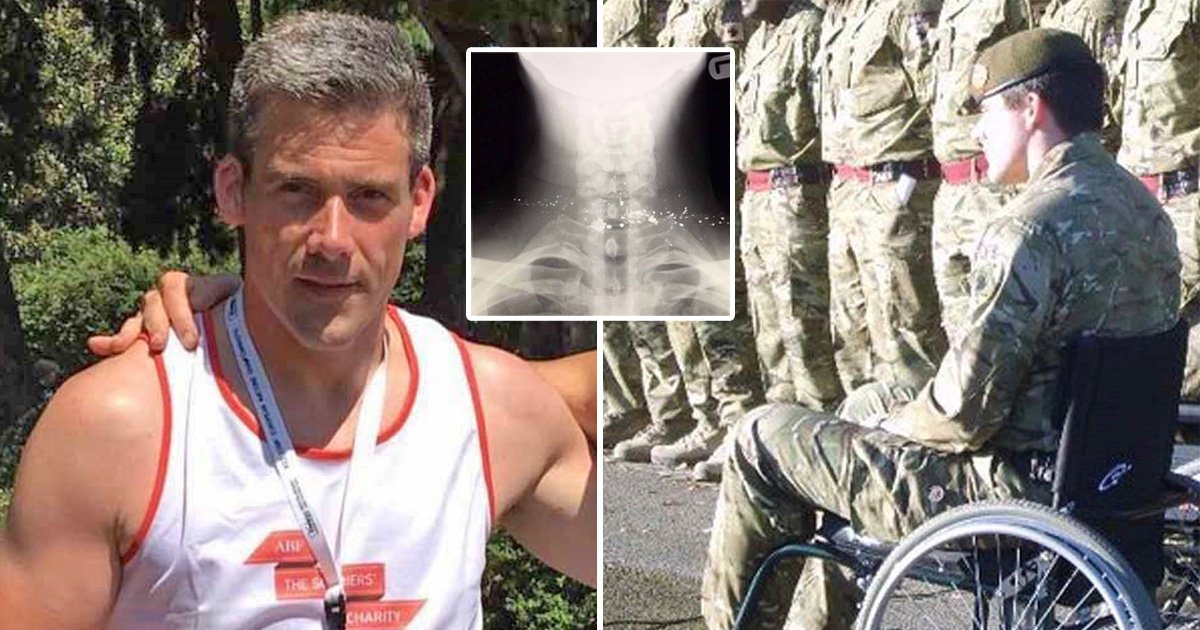 Mark Harding, 45, of Wigton, Cumbria has defied expectations by learning to walk again after he was shot during a tour of Afghanistan with the Army in 2010.

The injury left him paralysed from the neck down, but he’s beaten the odds and has since focused on helping his local community by taking on charitable challenges.

Mark said: ‘Since retiring, I really just wanted to give back.

‘The Army was a huge part of my life for so long and, now that I’ve retired, the fundraising challenges I set myself give me a sense of worth.

‘It feels good to help people.’

After joining up aged 19, the Lance Corporal served for 16 years with the 1st Battalion Duke of Lancaster’s Regiment.

After the Army converted his home to support his injuries in 2012, he decided he needed to do something to repay them.

He said: ‘The Army spent about £100,000 on the house to convert it and from that moment on, I wanted to find a way to repay that somehow.

‘I want to help as many people as I can and this Christmas challenge is just the latest way I can bring some cheer to people in Cumbria.’

When he was injured, Mark was in his 15th year of service in the British Army.

He was deployed on operations to the Nad-e Ali 41 West district of Afghanistan, an area well known as a trouble spot for heavy sniper fire.

He was in a four-man patrol to investigate an improvised explosive device (IED) in May 2010 when he was shot by a Taliban sniper.

Mark said: ‘I looked down and saw that the left-hand side of my body armour was covered in blood. Then I blacked out.’

The bullet had hit him in the neck, severely injuring his spinal cord and leaving him paralysed.

Mark was flown back to the UK in an induced coma and admitted to Selly Oak Hospital in Birmingham that night.

He said: ‘It took another four weeks after that to stabilise the extreme pain I was in and after that, I was moved to another hospital for seven months.

‘It was there that consultants told me I would never walk again.’

But that prognosis didn’t stop him from fighting for a better recovery.

Mark said: ‘I’ve always been the sort of person who wants to prove people wrong so the moment the doctor said that, I thought, “I’m going to walk again.”‘

While his recovery is still ongoing, after three years of physiotherapy including hydrotherapy and functional electronic stimulation, Mark was able to take his first steps since the shooting.

‘I went to physio twice a day,’ he said.

‘My legs had to be stretched which was just pain in itself.

‘My day started at 8am – I had physio, hydrotherapy, and counselling all in one day. I finished at 5pm, and it was really full-on.

‘I went from a wheelchair to a standing frame, to walking with a frame.

‘I had this treatment, functional electronic stimulation, it’s like an advanced TENS machine that reactivates the nerves and got me up and walking about.

‘I can now walk again, although it is with difficulty as I’m still rebuilding the muscles.

‘Once I’d conquered that, my thoughts turned to how I could help other people.

‘I’ve always wanted to do as much as I can to give back to the charities that supported me along the way.’

Since then, Mark has undertaken a number of physical challenges in the name of charity, including climbing Skiddaw Mountain in the Lake District, a Dragon boating competition in China, where he was the first disabled athlete in an able-bodied team in 2014, and he was the first quadriplegic to walk coast to coast – a 182-mile walk between the west and east coasts of northern England – for the Air Ambulance.

He said: ‘During lockdown, I rowed the distance of the Atlantic Ocean in my back garden in support of the NHS, which took me 88 days.

‘Six weeks after that, I spent a week rowing the distance from Carlisle to Calais which is 400 miles to raise funds for disadvantaged kids.

‘I want to continue to push myself and make a difference.

‘I want to show people with injuries from Afghanistan or any war zone that you can still do things and do them bloody well because we are soldiers.

‘As the British Army motto states, “We can still be the best”.’

And on December 9, Mark will begin his next challenge. He’ll undertake a three-day trek to Carlisle, carrying an Antarctic-style pulk – similar to a sled – behind him filled with donated items such as gifts and food for the Christmas hampers.

The walk will be in support of charity Walking with the Wounded’s campaign Walking Home for Christmas, which seeks to boost mental health.

‘I don’t see anything as a problem, I just keep a positive state of mind,’ he said.

‘I’ve got friends from the Army who will be joining me along the way and one of the local councillors, who has become a good friend, will be walking with me too.

‘There are around 500 families in Cumbria that are struggling to put food on the table, so we’re asking businesses to please donate products for the food hampers, as we’re hoping to provide each of these families with their own hamper for Christmas.

‘I would encourage any business owners who can spare some items, to please get in touch with me.

‘I want to help spread as much cheer as we can this Christmas.’

If you want to donate to Mark’s trek, go to the Walking Home for Christmas website.