Follow
Home » Lifestyle » ‘We Are the World’ organiser dies

‘We Are the World’ organiser dies

One of the key people behind the all-star charity single We Are The World has died in Los Angeles. Ken Kragen, a top entertainment producer, manager and philanthropist who turned to such clients as Lionel Richie and Kenny Rogers in helping to organise the 1985 music hit, was 85. 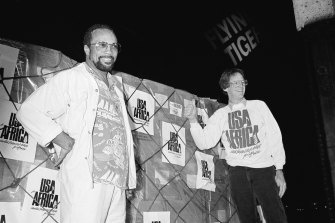 Quincy Jones and Ken Kragen at an event for the USA for Africa Foundation, on June 9, 1985. Credit:AP Photo

He died Tuesday of natural causes at his LA home, according to a statement released by his family.

“Ken worked tirelessly on behalf of the artists he represented, but what I loved most about him, other than the essence of his spirit, was that he had a 360-degree understanding that the combination of art & commerce could be used to make the world a better place,” Quincy Jones, who produced We Are the World, tweeted this week.

“As one of the original organising partners on We Are the World, w/o Ken’s expertise & specific skill set, we may never have made the enormous global impact that we did,” Jones tweeted.

Kragen was a Harvard Business School graduate whose other credits included producing The Smothers Brothers Comedy Hour and The Gambler television movies that starred Rogers. His most famous project began late in 1984 with a phone call from Harry Belafonte, who was anxious to raise money for starving people in Africa, notably in Ethiopia, where a famine had killed millions. The British recording Do They Know It’s Christmas? that featured George Michael, Bono and many others, had been a major success, and Belafonte wanted to organise a US effort.

He first contacted Kragen, whom he didn’t even know. “I needed a younger generation of artists, the ones at the top of the charts right now: Michael Jackson, Lionel Richie, Kenny Rogers, and Cyndi Lauper. When I looked at the management of most of these artists, I kept seeing the same name: Ken Kragen,” Belafonte wrote in his memoir My Song, published in 2011.

Kragen was hesitant at first, Belafonte wrote, but called Richie, who said yes. Rogers said the same, as did Jones and dozens of others, including Jackson, Bob Dylan, Bruce Springsteen and Stevie Wonder. We Are the World, co-written by Jackson and Richie, went on to sell tens of millions of copies and win Grammys for record and song of the year. Kragen later received a United Nations Peace Medal.

Kragen also managed Trisha Yearwood, the Bee Gees and Olivia Newton-John among others. His other charitable works included the “Hands Across America” fundraiser from 1985, when a cross country human chain featured everyone from President Ronald Reagan to Yoko Ono to Robin Williams.