Follow
Home » Lifestyle » ‘We didn’t know what we’re doing’: The inside story of Melbourne’s wildest festival

This is a peek behind the curtain – the layout of this exhibition isn’t fully finished yet, but what’s already in place is striking. It’s all a bright, mesmerising pink, from the pillars to the floor. There’s going to be a fizzing neon sign at the entrance, and along the walls are glass-topped cabinets, ready to house the objects that tell the story of Melbourne Fringe. 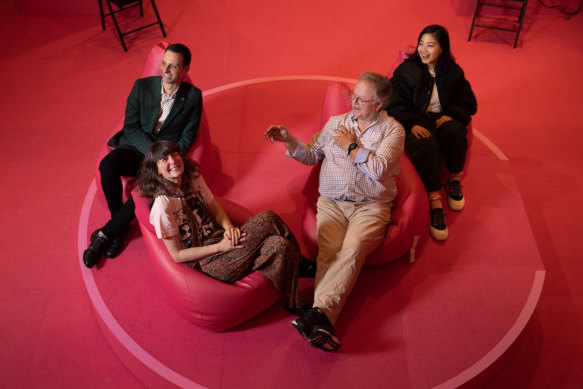 Simon Abrahams, Kate Rhodes, Arpad Mihaly, and Margot Morales visit the new exhibition, The Rest Is Up To You.Credit:Simon Schluter

It’s called The Rest Is Up To You, “a line taken from the 1983 festival newsletter encouraging people to get involved”, says curator Kate Rhodes, who along with Fringe artistic director Simon Abrahams put the show together. 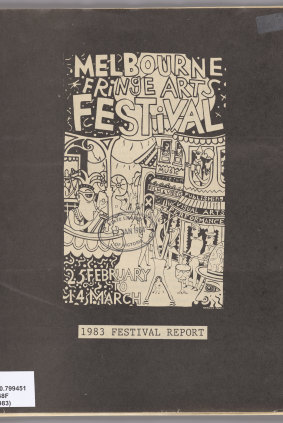 You can see the Fringe grow from an idea into a community, into the behemoth it is today, but what comes through this exhibition that looks back over 40 years and forward to the next 40 is that the core of the festival – that it carves out space for artists – has remained the same, no matter how much its outside grows.

“It’s an interesting tension between a gift, an acknowledgement, a recognition and a celebration of everything that everybody has done over this time,” Rhodes reflects. “So finding, the way to tell that story has been obviously very important.”

The library houses a large part of the Fringe archive, starting from the mid ’80s. “They were the natural partner to tell the story of the festival’s beginnings,” says Abrahams.

Also touring the exhibition in progress is Arpad Mihaly, co-founder of the Fringe – or as it was originally called, the Fringe Network. “The whole of the festival program was organised by the artists,” he explains. It incorporated performing arts, visual arts, publishing, writing, youth arts and film. “We didn’t know what we were doing,” he says. In the very earliest days he recalls dividing up who was going to do what. “I noticed that the people who had the experience didn’t put their hands up – so all the ones who didn’t know what they were doing, like me, just did all the stuff. Because the ones who knew what they were doing knew that this is really, really difficult,” he adds with a laugh. 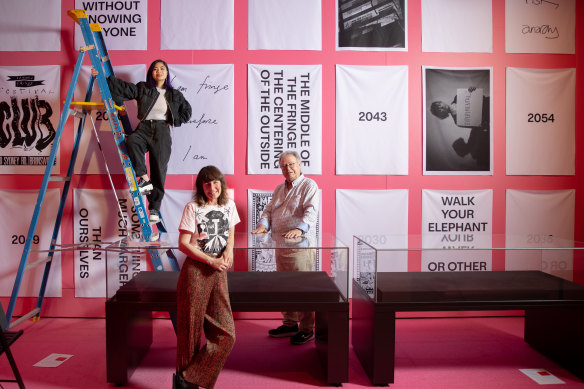 Margot Morales, Kate Rhodes, and Arpad Mihaly at The Rest Is Up To You.Credit:Simon Schluter

The first incarnation of Fringe was a single event attended by 500 people in August of 1982 in City Square. There were speeches and bands playing and everyone was instructed, quite mysteriously, to bring a cake. Mihaly laughs as Rhodes tells the story. The cakes were pieced together to form one giant cake and then iced, at which point Mihaly plunged a sword into it and dispensed pieces to the crowd. “The sense of the collective is there from the get go,” says Rhodes.

“This is an exhibition about storytelling – past, present and future – we wanted to create something that was bigger than just the Festival, an exhibition that people could contribute to and co-create in the spirit of the Fringe”, says Abrahams.

One way this is reflected is in the space’s soundtrack. Forty artists recorded their memories from across their time with the festival, with submissions from the public also welcomed. “Hundreds of people responded,” says Rhodes. All of this audio has been woven into an hour-long track that will fill the space as people visit, along with four separate recordings that tell longer stories. 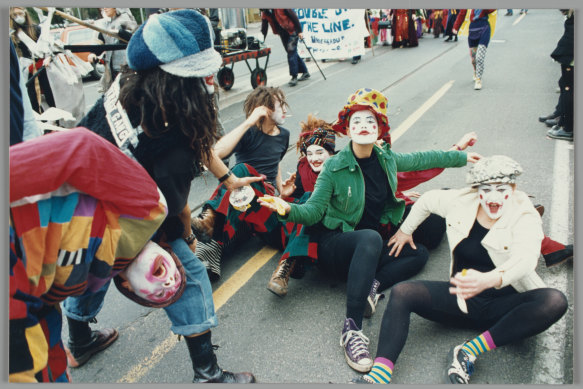 Artist Margot Morales Tanjutco is one of the contributors to the soundtrack. “The Fringe memory I submitted was about recreating Janet Jackson’s Pleasure Principle music video for Little Ones Theatre’s tribute night. I spent weeks watching her video over and over again so I could learn her exact choreography and the crowd couldn’t have been wilder had I been Janet herself. I still can’t believe I did that.”

In a meta twist, one item plucked from the archive is a 1984 letter from the library requesting materials from Fringe to keep in its collection. At that point the festival was only two years old, its future uncertain. The letter serves as a portent of things to come – including this exhibition Rhodes points out. “It already presumes that Fringe is going to have this ongoing life and it will be recorded here.”

While The Rest Is Up To You is built on the past, it’s a living exhibition that celebrates the ethos of the Fringe. In the middle of the room is a small stage, with performances planned for across the coming months.

“This exhibition project finishes in 2062 – that’s another 40 years from now – when we finish comparing our predictions of the future with the reality of the world. It’s bombastic and ambitious and perfectly Fringe to create a project that writes a history of the future”.

The Rest Is Up To You is at State Library Victoria from October 6 until July 2023.