When George de Silva was growing up in Australia, there weren’t always others around him who shared the same cultural identity and experiences. “I found myself rejecting my Sri Lankan and Greek heritage at times in order to assimilate into white Australian culture,” he says.

Today, the musician is part of a newly formed collective of South Asian Australian artists called Kerfew. The collective brings together 13 producers, musicians and artists from Sydney, Melbourne, Perth, Brisbane and Canberra. Bonded by their shared experience as young South Asians in the Australian music industry, they want to create a support network for other “misfits” like them, says Brisbane-based member Itrat Memon, who makes music under the name Iti.

“It immediately felt like a family,” says Sydney-based DJ Munasib, of the group, which connected on Instagram. 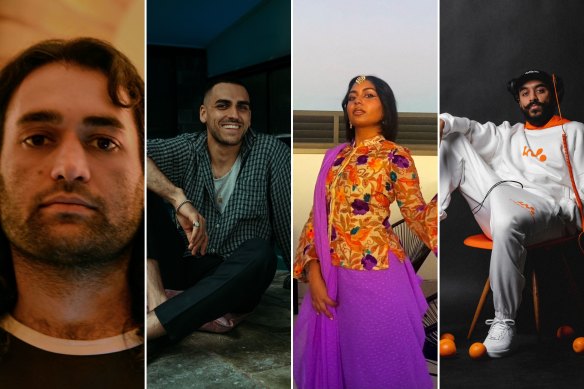 Four of the members of Kerfew, from left to right, George de Silva, Itrat Memon, Munasib, and Amar Singh.

Its members were inspired by Daytimers, a UK collective of South Asian musicians formed in London’s first lockdown in 2020 that rose to prominence after performing at iconic music event Boiler Room. “We saw what Daytimers was doing and thought, wait, is it possible there’s an audience for this here?” says Munasib.

Their first party already sold out ahead of this Saturday so it’s clear there’s an appetite for alternative voices outside what is still a largely white Australian mainstream.

And while the landscape is slowly changing, representation – and perhaps more importantly how First Nations people and people of colour are represented – still has a way to go. Last month, an independent review of bullying and discrimination in the Australian music industry found that “people from diverse backgrounds, including First Nations people, people of colour, people with disability and LGBTIQ+ people, frequently experience discrimination, resulting in a denial of opportunities.” Elsewhere, a 2017 report from The University of Sydney investigating sexism in the industry ignored the intersecting experiences of women of colour, and there have been no investigations into racism in Australian music on such a scale.

“State bodies and national bodies need to recognise that we are forming a pocket of the Australian music industry whether they choose to acknowledge it or not,” says Memon. “We’re creating our own space,” he continues. “I’ve never believed we should ask those who have never included us to include us.”

Munasib, whose father founded Australia’s first Bengali music school, grew up attending classes and performing poetry and singing in Bangla. Her parents, both musicians, exposed her to South Asian music from a young age.

“Growing up in Australia as a Punjabi I think is one of my biggest advantages as a DJ,” says Amar Singh, who performs under the moniker Mowgli. “As a kid I was exposed to so many different sounds at home – all the way from Bhangra and Hindustani classical music to ’80s rock and ’90s hip hop.”

But while music is such an ingrained part of community and culture for many South Asians, it’s not a career pathway that is usually supported by families, says Munasib. The collective’s name, Kerfew, challenges the figurative and literal curfews imposed upon them by growing up – from not being allowed out to parties to the disapproval that comes with pursuing a career in the arts.

Music, then, is a way for its members to remake their South Asian identities anew. Growing up Australian in the internet age, their influences are myriad, from jungle, to house, to hardcore. Nor do all members include South Asian tracks in their work. Yet they’re showing, as Memon says, that “there’s more to Australian music than just surf rock.”

Their monthly radio show also showcases the nuances within South Asian culture – from being queer to navigating the dating scene as a young woman.

In one episode, Memon discusses the intricacies of being Muslim. He says that when it comes to his faith, he’s experienced the most discrimination from the Australian music industry.

“The music industry tends to position itself as this very inclusive industry, but I think this can be very performative,” he says. “If you want to support diversity and people’s culture, you need to support every aspect of their culture, not just those that suit you.”

Kerfew’s Yung Sing is touring Australia next month, with supporting acts from members including Mowgli in Perth and Munasib in Sydney. To be the first to know about upcoming events, follow Kerfew on Instagram here, and listen to their radio show on Area 3000 wherever you get your podcasts.