What’s our globetrotting PM learnt about Australia’s place in the world?

Anthony Albanese was sworn into office faster than any prime minister in the country’s history, even before confirmation that he’d have a majority in the House of Representatives.

Why? So he could rush straight to Tokyo for a meeting of the Quad leaders representing four democracies of the Indo-Pacific – Australia, India, Japan and the US. The urgency of the trip was a reality and also a metaphor of the times. 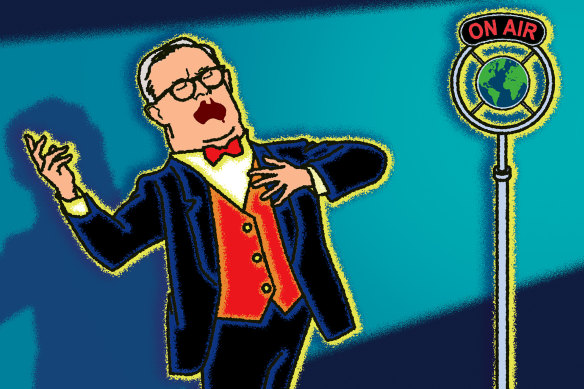 Australia, smugly distant and America-allied, long has been sequestered from global strife. Diplomacy and war were seen as optional extras for Australian prime ministers.

Leaders who dared leave the country were berated by the tabloids for their elitist extravagance. For many years, prime ministers travelled abroad in a decrepit air force VIP plane that routinely broke down because they were afraid of the reaction if they bought a new one.

Today, diplomacy is seen as a survival tool in a hostile world and war is in prospect. Albanese’s travel program has barely paused since his first day. He returned from London on Wednesday and leaves for Tokyo on Monday. A string of other international summits and engagements follow.

Incidentally, in London he had his third meeting with US President Joe Biden – Albanese finds him to be, contrary to the comic caricature, not doddering but “sharp as”. He also had multiple conversations with the new monarch. 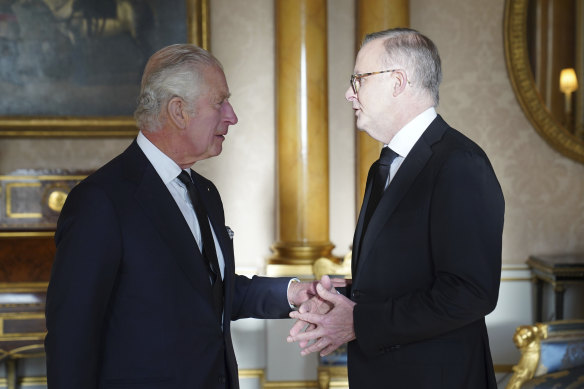 Charles, he reports, is “warm, engaging, intelligent, with great depth of experience”. He’s so positive about him that I have to ask whether the King talked the PM around and made him into a monarchist? “No, that hasn’t changed,” replies the lifelong republican.

What’s the new prime minister discovered about Australia’s place in the world in his first four months? Australia’s opinions matter much more than most of us realise, he says.

The Anglo-American author Bill Bryson wrote in his 2001 travel memoir, Notes from a Sunburned Country, that Australia – once you left it – was a country that ceased to exist. It was never mentioned in world media, apart from the obligatory shark attack and bushfire stories, the stuff of stereotype. It was a place of no consequence beyond its own shores.

No longer. “We are almost uniquely positioned to have a significant influence over global political dynamics, and that’s something Australians need to be cognisant of,” he tells me.

This leads to his biggest surprise in his dealings with the world: “It’s the extent to which Australia’s changed position on climate change has mattered; I knew it mattered, but the extent of it has been extraordinary.

“Because of Australia’s standing, it was seen as important. Whether it was at the Quad, or the response from [Indonesian President] Joko Widodo, or the Pacific Islands Forum, or the NATO summit with European and North American leaders. There was enormous attention to Australia’s position.

He gives an example of the warm climate that welcomed the return of the Aussie prodigal son. 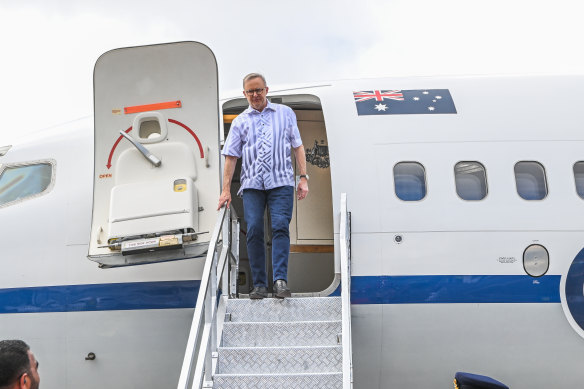 When Joe Biden convened the Major Economies Forum on Energy and Climate in June to tackle “code red for humanity” as the president put it, the US leader spoke first, the UN secretary-general second, and the chair of November’s COP 27 third, followed by Albanese. Australia was the first country invited to speak, other than the host.

“The difference that’s made to our standing in the world can’t be overstated,” says Albanese.

He points out that Australia’s new climate policy and its post-Morrison reconciliation with France have opened the way to a potential new trade deal with the European Union, something that could be “extremely important” to Australia’s economy.

But he described Australia as “almost uniquely positioned to have a significant influence over global political dynamics”, and it’s certainly not the only country to have adopted a more active climate policy in the last year. What’s almost unique about Australia’s position?

“We’re a country with 65,000 years of Indigenous heritage but in more recent times with personal connections to the UK and Europe, and located in Asia, a developed country in a region that’s developing, an island continent located where we are – that gives us a unique perspective on the world and gives us an opportunity to advance our values and worldview. We get listened to.”

Australia certainly was listened to by China. To the point where Xi Jinping’s regime decided it needed to be shut down. After Beijing imposed trade bans on over $20 billion worth of Australian produce, China’s embassy in Canberra produced its infamous list of 14 demands. Of the 14, six are demands to shut down Australian criticism of China’s regime.

And in refusing to bow to Beijing’s demands, Australia was listened to by governments everywhere. Australia “set an incredibly powerful example” for the world, according to US Secretary of State Antony Blinken. “I think China has lost more than Australia has in its efforts to squeeze Australia economically,” he told me.

Asked his top priorities for his government’s international agenda, Albanese nominates two – climate change and “global security challenges”. National security, he says, is “something much more than defence, it includes cybersecurity, health security, environmental security”. At the centre of all these challenges sits Xi Jinping’s China. 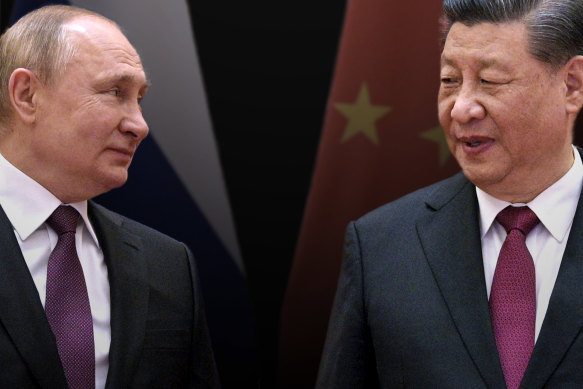 China has joined with its junior partner, Vladimir Putin’s Russia, in their self-styled “no limits” partnership.Credit:AP

China has joined with its junior partner, Vladimir Putin’s Russia, in their self-styled “no limits” partnership. It’s a revanchist relationship between two countries determined to redraw international borders through sheer force, and a fascist fraternity of regimes determined to extinguish all rights of their citizens.

Albanese is proud of Labor’s performance in standing up to both powers. “I’m quite proud that Labor, from opposition, stood on issues like the extraditions’ treaty” that the Turnbull government wanted to sign with Beijing in 2017. Labor under Bill Shorten blocked the treaty, which is now defunct. Labor also supported all the Coalition’s substantive measures to defend against Beijing’s intrusions.

“I had no illusions as to the difficulty of the China relationship. I said before the election, and I’ve said since, we should cooperate with China where we can and defend Australia’s values where we must. I’ve sought not to have inflammatory language. But we have to be prepared to call out China, for example over its economic sanctions against Australia.”

When Foreign Affairs Minister Penny Wong met her Chinese counterpart Wang Yi in New York on Friday, she raised Beijing’s trade bans as the first order of business, she told reporters. She offered no hint at any Chinese yielding.

Australia’s response? Beijing wants to join a big, new, 11-nation regional trade framework, the CPTPP or Comprehensive and Progressive Agreement for Trans-Pacific Partnership. Australia is one of the founding members. The deal is open to new entrants but only if all existing members approve.

Albanese tells me that, so long as Beijing’s political trade bans are in place, Australia could not contemplate approving China’s membership of the group: “A precondition is that there needs to be respect for existing trade agreements.”

He says that he’s not made any attempt to initiate contact with Xi. Australia, it seems, is not about to kowtow.

Thanks to Australia’s grittiness, Albanese found himself invited to the June summit of the 30 leaders of NATO. This is not a group that Australia belongs to, but Albanese was asked to join a panel discussing “NATO in an era of great power competition” with Britain’s Liz Truss and Belgium’s Prime Minister Alexander de Croo. Among the NATO leaders, “people wanted to know about Australia,” says Albanese.

Australia needs to do much more, he says. It needs to expand national power because “if you’re not moving forward, you’re going backward relative to others”. The elements of power that need to be expanded? Albanese lists aid, diplomatic capacity, engagement in regional and multilateral groups, economic capacity including environmental policy and social policy, and adding more defence capability.

Most urgent among defence capabilities? Australia needs to get its hands on hypersonic missiles, says the prime minister. At the moment, Australia has no long-range strike capability. The Morrison government started a process; Albanese wants to accelerate it. He’s critical of the “gap between some of the rhetoric about defence expenditure and rhetoric about capability, and the actual capability delivered – you can’t defend Australia with a press release”.

A big item for the Albanese government is to add resilience by building sovereign capability. “We need to be able to manufacture pharmaceuticals, energy goods, defence goods here to make Australia less vulnerable,” and the government’s proposed $15 billion National Reconstruction Fund is designed to help do exactly that.

Albanese has taken the leadership of country that he finds to have a great bank of credit in the world, mostly credit built by the collective efforts of millions of citizens over centuries: “You get very positive feedback when you are prime minister of Australia, and I think that’s a level of goodwill we shouldn’t waste.”