A year ago, women’s rage was potent and palpable.

Hundreds of thousands of women – and their supporters – took to the streets and marched on the national parliament, and in state capitals, for the March 4 Justice.

Grace Tame was Australian of the Year and women’s safety and equality was on the front pages as story after story came out.

Parliament House became a lightning rod for a national conversation about the treatment of women as Brittany Higgins, Rachelle Miller, and Kate became household names (with the accused men vehemently denying all allegations). 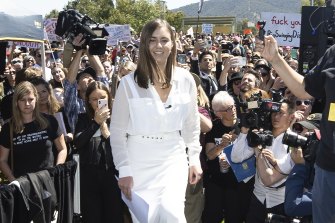 A petition started by Chanel Contos led to thousands of Australian women sharing stories of sexual assault from their school days, sparking an overhaul of consent education.

On the eve of the 2022 election, where has that energy gone? Has it dissipated? Or have women maintained the rage and channelled it in new directions?

Jaime Evans, the Sydney organiser of the March 4 Justice, said protests attracted attention but the fact women’s anger was less visible did not mean it had diminished.

“It would be foolish to disregard the anger that was there a year ago because it’s not on the streets at the moment,” Evans said.

March 4 Justice was mostly virtual this year because of COVID-19 and a desire to experiment with a more inclusive format. There were small events in Melbourne and Adelaide but not Canberra and a planned Sydney protest march was cancelled.

Evans said recent news that the United States could be gearing up for a fight over abortion rights had galvanised many Australian women.

Many of the women stirred to protest last year are scathing of the Morrison government’s response to the issues, including the fact it did not finalise the National Plan to End Violence against Women and Children 2022-2032 before it went into caretaker mode.

A government spokesperson said the national plan required extensive consultation and a revised version was now in circulation, with a planned start in July. The spokesperson said the government had “maintained a consistent focus on improving the lives of women in Australia throughout this term of government” and this included two women’s budget statements underpinned by $5.5 billion to fund safety initiatives and more generous childcare subsidies.

Journalist and author Jess Hill, a speaker at last year’s March 4 Justice in Sydney, said the “explosive anger of last year could only ever be a temporary reset” and many had assumed the media would keep pushing the issues until the election. 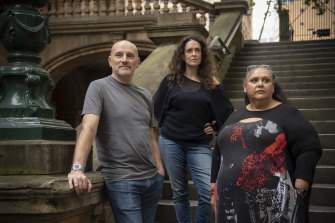 “We shouldn’t keep needing these watershed events like a protest or a homicide to put [sexual or domestic violence] back on the national agenda,” Hill said.

Bronwyn Currie, the Melbourne organiser of the March 4 Justice and separately a Victorian Senate candidate for the Animal Justice Party, said she was still getting a level of messages that suggested the rage was still there.

However, Currie said the COVID-19 pandemic – including working from home and looking after children in remote learning – had sucked up women’s energy.

“Women are just exhausted and have been doing everything that women do under really difficult circumstances but I strongly believe that the rage of women will be felt at the ballot box,” Currie said. 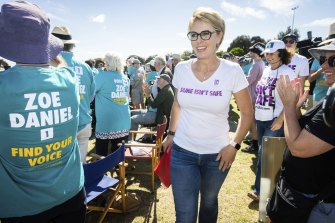 Goldstein candidate Zoe Daniel is one of several teal independents running this election, with women accounting for 40 per cent of all candidates.Credit:Paul Jeffers

Polls suggest she could be right. Among others, the Financial Review Ipsos poll suggests women’s support for the Coalition and Prime Minister Scott Morrison is low and has fallen significantly since 2019. Only one in three women rate Morrison as their preferred prime minister.

Women are not just voting in this election, they’re also running for office and volunteering on campaigns, especially for the teal independents running on climate action, political integrity and women’s equality.

At a panel discussion hosted by the Women’s Electoral Lobby last week, Dr Anne Summers said many of the teal independents were “Libs in disguise or not even in disguise” but they were giving more attention to the rage expressed by the women’s marches last year than the major parties.

“A lot of [the energy] is going to the teals because nobody else is putting their hand up and saying ‘justice for women is one of my basic platform planks’,” Summers said.

Fellow panellist Professor Nareen Young said this was because women’s safety was a mainstream issue because “every woman understands the reality and the tedious nature of sexual harassment and the woeful inadequacy of the complaints processes in our workplaces”.

But as an advocate for low-paid women, she found the teals problematic in a feminist context given they were generally fiscally conservative.

“I’m deeply concerned about the wholesale feminist support for the teals,” Young said. “I’m not saying they’re not better than the Liberals – clearly they are … but they’re not worthy of blanket support without critical pressure.”

Zali Steggall, the independent MP for Warringah, said independents were “routinely accused of being another party in disguise” but being independent meant she “simply worked towards the best outcome on each issue”.

Georgie Dent, executive director of The Parenthood, said the rage of 2021 had not faded but had been “translated into a laser-like focus on what individual women can do”.

For Dent that meant her advocacy for parental leave, childcare and family-friendly workplaces, but for many others it meant volunteering on political campaigns for the first time.

“There is a volunteer army right around the country of women who are engaging for the first time in a really sort of substantive capacity – volunteering for candidates is huge,” Dent said.

This mirrors the experience of Sue Barrett, 60. One of the organisers of the Melbourne March 4 Justice, she is now campaign manager for the Zoe Daniel campaign seeking to unseat Liberal MP Tim Wilson in the south-eastern bayside Melbourne electorate of Goldstein.

Barrett said being involved in politics was “very new”.

“There was a sliding door moment when the story about Brittany Higgins broke on the 15th of February last year,” she said.

“I lay awake all night thinking about the at least seven times I’ve had to talk or fight my way out of sexual assault starting from age 13.”

Barrett said the Daniel campaign has 1200 volunteers, of which 1000 are very active, and women made up half the rank and file and two-thirds of senior leaders.

In the inner-eastern Melbourne electorate of Kooyong, where independent candidate Monique Ryan is challenging Treasurer Josh Frydenberg, campaign manager Ann Capling reports an impressive 2000 volunteers of which 1800 are very active.

Capling said, with a few notable exceptions, most of the early volunteers for Voices of Kooyong and later Ryan’s campaign (a separate entity), were middle-aged or newly retired professional women who were “fed up” with the government. There was now an even gender split and a number of younger people on the campaign but that came later.

But while women’s anger might have been a catalyst, Capling said the campaign itself was “hopeful and joyful”.

Australian Electoral Commission figures show in both 2019 and 2016, women accounted for a third of political candidates. In 2022, women make up 40 per cent of the 1624 candidates running for election.

Commentator and writer Jane Caro, a Senate candidate for the Reason Party in NSW, said she had never planned to go into politics until her name was floated to challenge Tony Abbott in Warringah in the 2019 election, before Steggall agreed to run.

Speaking from the campaign trail in Albury-Wodonga, Caro said she considered this a “lucky escape” at the time. But over the next three years, she became so enraged that women “rate so little with this government” that when the Reason Party approached her, she agreed.

Caro, while agreeing with Young on the need to champion low-paid women, said she was “a bit over the need for women to be perfect” and suggested feminists should support teal candidates “if they felt that person is going to better represent them” than the alternatives.

Outside the political realm, Caro believes a blossoming of art and culture “telling the truth about women’s lives” is another “revolutionary” outcome off 2021.

Several recent novels mine the themes of sexism and violence, including Caro’s own The Mother, Diana Reid’s Love and Virtue, Debra Oswald’s The Family Doctor and Cassie Hamer’s The Truth About Faking It.

Hamer said she drew on her own life and the sexism she encountered when she worked in television news in her 20s, but was inspired by the bravery of younger women like Brittany Higgins and Grace Tame and the earlier #MeToo movement.

“It’s made me perceive the past differently and fuelled my anger and given me courage to speak out,” Hamer said. “A woman’s story is perhaps the most powerful thing that she has to share.”

Renee Carr, executive director of Fair Agenda, said it was up to everyone who supported March 4 Justice to keep the issue of violence against women in mind when voting.

“It’s a life-altering issue for millions of us – and it’s barely rated a mention from our major party leaders this election,” Carr said. “You bet the rage is still there.“

POTUS Review: A Rollicking New Broadway Farce About the Women Behind the Idiot in the White House

The Ridiculous Pile-Up of New and Returning TV? Blame the Emmy Calendar