Los Angeles: A lawyer for Jamie Spears has denounced a Los Angeles judge’s decision to suspend him as conservator of his daughter Britney Spears’ $US60 million ($83 million) estate.

LA Superior Court Judge Brenda Penny removed Jamie Spears from the role on Wednesday, local time, and set a November court date to consider whether to terminate the 13-year-old legal arrangement. The judge replaced him temporarily with an accountant suggested by Britney Spears’ attorney. 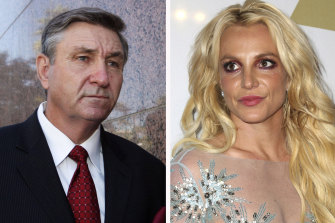 A lawyer for Jamie Spears, left, said the outcome was “disappointing, and frankly, a loss for Britney Spears”.Credit:AP

“Respectfully, the court was wrong to suspend Mr Spears, put a stranger in his place to manage Britney’s estate, and extend the very conservatorship that Britney begged the court to terminate earlier this summer,” Vivian Thoreen, a lawyer for Jamie Spears, said in a statement on Thursday.

The outcome was “disappointing, and frankly, a loss for Britney Spears,” Thoreen said.

The Stronger singer previously told the court that her father was controlling and that she was afraid of him. After he was suspended, the pop star said that she was “on cloud 9 right now”.

Thoreen, however, said Jamie Spears had helped the singer revive her career and re-establish a relationship with her children under the conservatorship, which has governed her personal and financial affairs since she had a mental health breakdown in 2008. Details of the singer’s mental health have not been publicly disclosed.

“For anyone who has tried to help a family member dealing with mental health issues, they can appreciate the tremendous amount of daily worry and work this required,” Thoreen said.

“For Mr Spears, this also meant biting his tongue and not responding to all the false, speculative, and unsubstantiated attacks on him by certain members of the public, media, or more recently, Britney’s own attorney,” she added.

In a surprise move earlier this month, Jamie Spears asked the court to end the conservatorship.