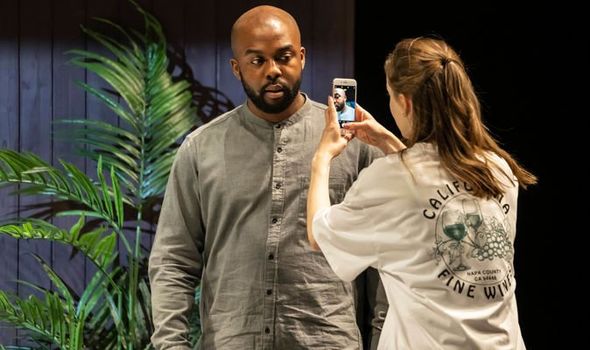 Leo is a black artist who lives with white lawyer Dawn (Helena Wilson); Ralph’s black girlfriend Misha (Faith Omole) runs an online phone-in from home. They are all smart, educated and liberal-minded and their inter-racial relationships appear well-adjusted and harmonious. But after Leo is beaten up by cops for walking the streets at night owing to his sleeplessness he makes Ralph a shocking proposition – the “opportunity to transgress.”

He asks Ralph – who has inherited wealth – to buy him for 40 days in the belief that as a white man’s property he will be protected from further harassment.

For a while, the arrangement works. As it starts to unravel along with the relationships, uncomfortable questions are asked and liberal values melt away to reveal something more sinister underneath.

With much of the action set in Ralph’s upmarket gun club (changed from a bowling alley in the US productions), Suzan-Lori Parks’ play bristles with topical energy even if the second half doesn’t quite live up to its opening promise.

The intermittent monologues given to each character distract from the drama which performs its task well enough without resorting to explanatory ‘footnotes’.

In addition, Ralph’s descent into atavistic racism isn’t totally convincing and some of Parks’ dialogue is unpalatably smug – “Waking up is hard to do but staying Woke is harder.”

There is no doubt about the actors, however.

You won’t see a finer or more consistent set of performances on the London stage right now.