Follow
Home » Lifestyle » Whose spill is it anyway? How Battin picked a fight with O’Brien but got KO’d by Guy

Whose spill is it anyway? How Battin picked a fight with O’Brien but got KO’d by Guy

Waking up on Tuesday, not even Brad Battin thought he was about to become Victoria’s opposition leader.

Twenty-four hours after the Liberal MP and former policeman launched his coup attempt against Michael O’Brien, Battin’s bid was defeated by two internal groups: O’Brien’s rusted-on core and, even more influentially, by a handful of MPs who want former leader Matthew Guy returned to the top. 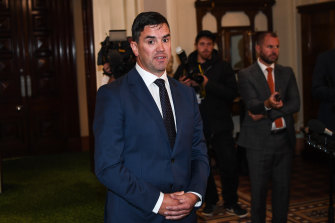 Surprise offensive defeated: Brad Battin after his spill motion was voted down on Tuesday morning.Credit:Justin McManus

A challenge to O’Brien was inevitable by May and former leader Guy, despite his constant denials to all outside his inner circle, was considered the most likely to reclaim the blue crown. Tuesday’s events have only added to that perception after Guy and his allies worked furiously to stop the spill.

It was only a few weeks ago that Battin and Guy caught up for dinner. On that evening Battin is believed to have told Guy that he would support him should he challenge O’Brien for the top job.

The Liberal Party’s decimation in the Western Australian election at the weekend changed that.

It started with a cancelled dinner. Richard Riordan, an experienced MP and one of Battin’s closest allies, usually organises a Monday night feed for country Liberal MPs to kick off every week that Parliament sits. There was no dinner on Monday night. 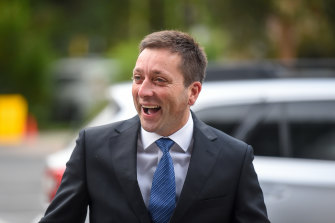 Former leader Matthew Guy arriving at Parliament on Tuesday, the day after his team dissuaded colleagues from the spill.Credit:Justin McManus

If they didn’t suspect it already, the party room knew something was afoot immediately after a shadow cabinet meeting on Monday morning. Battin, Riordan and the third musketeer, MP for Warrandyte Ryan Smith, hit the phones to colleagues and set their challenge in motion.

“Enough is enough,” was Battin’s sales pitch. “I have a good resume, I can run a positive campaign, we need change.”

One of the first calls Battin made was to Guy, about midday on Monday. Kew MP Tim Smith, Guy’s No.1 confidant, learnt of Battin’s plan on Twitter on Monday. He was furious.

Smith, Guy and ambitious Brighton MP James Newbury lead a small but motivated group that wants O’Brien out, and some members of the group have been destabilising him for months. But they did not want him replaced by Battin, who would almost certainly have seen the party through to the next election (due in November next year), culling any hopes of a redemption for Guy.

Battin’s team, bunkered in at an MP’s house, told colleagues on Monday afternoon they had 12 of the 16 votes they needed to topple O’Brien, including frontbenchers Nick Wakeling, Roma Britnell and Bridget Vallence – though Vallance later denied backing Battin. They helped with the sales pitch, even telling colleagues that a Battin win was the only way to stop the return of Guy.

Suddenly, Battin wasn’t taking on only O’Brien’s group of rusted-on senior MPs. Guy’s camp mobilised, briefing journalists against the spill and calling colleagues to dissuade them. Battin’s crew were incensed, slamming the Guy camp as “hypocrites of the century” for wanting a new leader but not backing Battin.

Federal MPs from the faction aligned to Housing Minister Michael Sukkar and Treasurer Josh Frydenberg were also active on the phones until well into the evening, discouraging Victorian MPs from supporting Battin. Some MPs were politely reminded that preselections for next year’s state election were due in a few months, according to two Liberal sources.

The O’Brien camp – health spokeswoman Georgie Crozier, leader of the upper house David Davis, deputy leader Cindy McLeish and Rowville MP Kim Wells – also worked into the night. Each was assigned a set of names to call, reporting back to Wells, who was managing the spreadsheet. 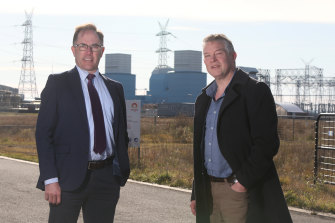 O’Brien’s supporters noted a drop-off in support for Battin as the night wore on.

Sandringham MP Brad Rowswell, a key player in deciding the final count, called Battin and Ryan Smith at 10pm to inform them he wouldn’t support the spill.

By 10.30pm O’Brien’s team felt the leader was safe enough to survive.

O’Brien said as much to the assembled media as he arrived at Parliament flanked by his squad before the 8.45am party room meeting. 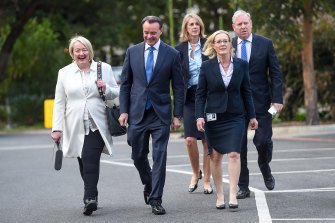 Ready for a challenge: O’Brien arrives with his supporting band of senior MPs who worked into the night on Monday.Credit:Justin McManus

“I’m very confident I’ll have the support of my team and the party room,” said the 49-year-old, spruiking a “strong and open Victoria”.

MPs David Hodgett and Matt Bach told the media they would not support the spill. Guy did the same.

Only conservative MP Beverley MacArthur confirmed she would vote against O’Brien as Battin’s crew hustled into Parliament through a side entrance.

Amid last-minute murmurs the leadership spill wouldn’t even be attempted, MPs were surprised to watch respected veteran MP Bruce Atkinson stand and announce that he thought the Liberal Party required a new leader. 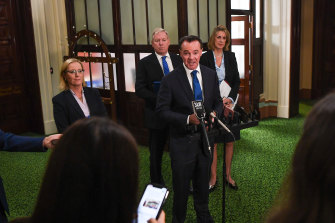 Guy’s supporters gathered in one corner of the meeting room. In order to prove to the group’s leaders that each member was voting to block the spill, some MPs were asked to show their ballots to one another.

Controversial conservative Bernie Finn – an O’Brien supporter whom the leader has refused to publicly criticise in recent months – and Bill Tilley, a Guy supporter, counted the votes before revealing the final count of 22-9.

Battin’s team thought they had more. There’s no doubt they would have if his challenge had still been truly alive as the meeting room’s doors shut.

After the spill, the National Party joined the battered Liberals for their Coalition meeting. O’Brien didn’t address the spill, rather mirroring the wounded Battin’s stance that it was a line in the sand and the leadership issues were now resolved.

Anyway, How, is, It, spill, whose
You may also like: