True to the script! Thanks to a ton of prosthetics and hours upon hours in the makeup chair, Jessica Chastain completely transformed her appearance for her new movie, The Eyes of Tammy Faye.

But the 44-year-old actress didn’t simply channel the evangelists’ bright and bold style of glam. Instead, her makeup artist, Linda Dowds, made sure that her eyeshadow, lashes and lipsticks were actual recreations (right down to the shade) of looks throughout Faye’s life.

“It was really important for us to be as authentic as possible,” Dowds exclusively told Us Weekly. And to achieve that end, she poured over interviews, photos and TV segments through the years to pinpoint specific “colors and tones” worn by the preacher. She added: “We wanted to match it as much as we possibly could.” 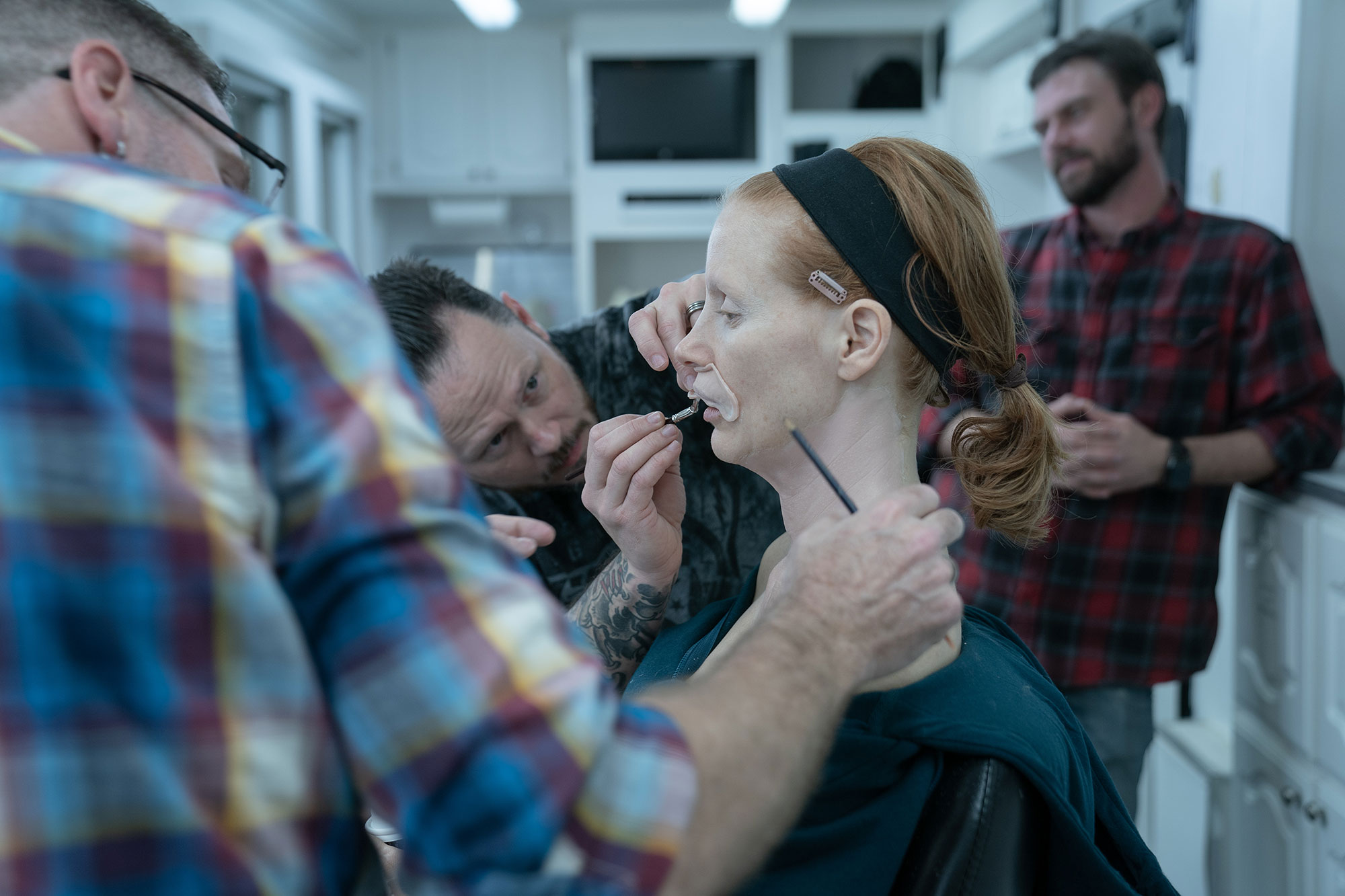 Recreating these specific snapshots didn’t just help in the visual recreation of Faye, it also helped Chastain, who been working with Dowds for years, get in the right frame of mind.

“Working with Linda Dowds on my film projects helps me find the characters I play,” Chastain told Us. “Her attention to detail and her specificity in terms of the character’s emotional state from each moment inform her makeup choices. Nothing makes me happier when people don’t recognize me in the character I’m playing.”

Creating such a life-like re-imagination of the character wouldn’t have been possible without Dowds’ intense research and commitment to “honoring” Faye. In fact, she went so far as using the exact drugstore products the preacher used on herself.

“I know people talk about her in terms of, ‘She wore a mask,’ but I don’t believe that of her. I think that she loved makeup. She says it herself, ‘You don’t have to be dowdy to be a Christian. Who says you can’t put mascara on fake lashes.’,” Dowds explained. “She said she spent about $25 a month going to Target or swap meets to embellish her makeup kit every month and if she was feeling a little low, she added more.”

That in mind, Dowds paid a visit to the drugstore. She scooped up a dupe of the discontinued mascara Faye used. She ordered since-expired products that the talk show host used in her daily life on Ebay. (They were placed in Chastain’s bag and on her dressing table.) She even consulted the Revlon Bible, a catalog of lipstick shades from every year, to find the exact hue that Faye wore throughout different decades of her life.

Dowds poured over dozens of shades of L’Oréal and Revlon eyeshadow quads, which were some of Faye’s favorites. “Those were my go-to. I had a lot of those pinks, purples and blues. I also used — which I haven’t used in my real makeup work in a long time — but those little spongy wands. Those shadows are so frosted and they tend to be a lot flakier. Those little sponges hold it a bit better and give you a real depth color. We wanted it to be that authentic,” Dowds said.

Celebrities Who Admitted They Got Plastic Surgery

Thankfully, those products have an affordable price tag, which was nice given the sheer volume of makeup they used on set. With anywhere from four to seven hours in a glam chair every day, they ran through nearly six tubes of mascara, five tubes of eyelash glue and more falsies that they could count.

Even though there was no shortage of makeup ripe for grabs, Dowds said that striking a balance between the “tattooed lip liner” look and verging on a caricature, something they worked hard to avoid, was a tricky balance. 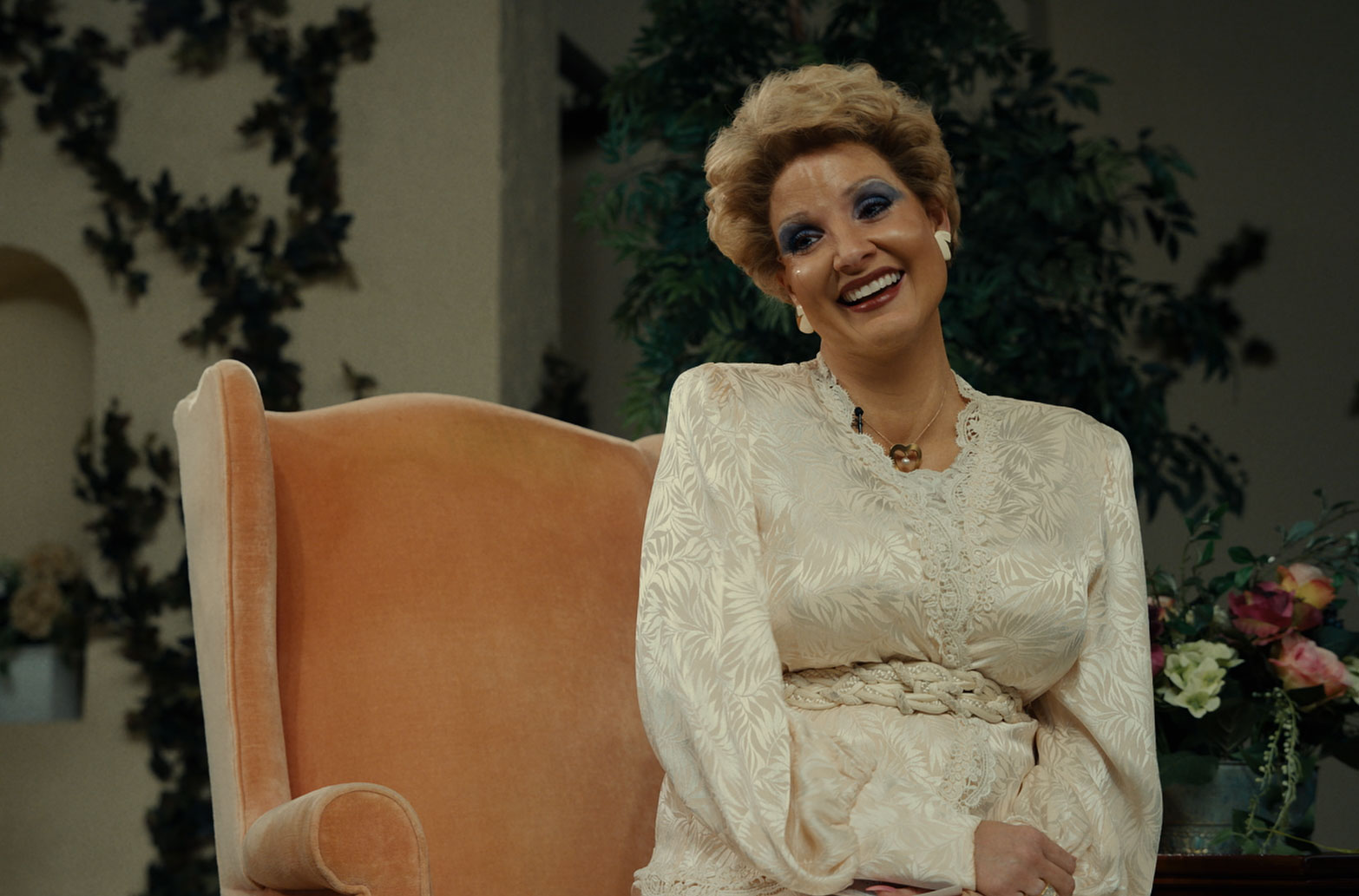 “It was such a big look. Going to the line was so important. Not crossing it was more important. And when you’re in it, sometimes you can’t see the forest through the trees. Sometimes we take a step back or just be super collaborative. I love working with her [Jessica] for that reason,” Dowds said. “We talk through it. There’d be times where I’d be like, ‘What do you think? And that was very helpful.”

She went onto explain that as a makeup artist, her role is to aid in bringing Chastain’s character to life. “Jess always was listening to Tammy Faye, she spoke Tammy Faye, she sang Tammy Faye, so she was so immersed in it the whole time we were working in the trailer,” Dowds told Stylish. “One of the reasons that she wanted to do this project was she saw a side where she wanted to honor Tammy and for people to see a different side of her … There was such a united effort and bring this character to a whole new generation of people that are just discovering who Tammy Faye is.”