“I don’t know if people know this, but Ty Burrell was meant to do it, and there was a family emergency,” the Broadway vet, 46, told Entertainment Tonight on Monday, August 29, about helping his on-screen niece, 31, marry Wells Adams earlier this month. “So, I got a phone call 12 days before the wedding, and that’s why Ty wasn’t there, he had stuff going on.”

Ferguson continued: “But I did call Ty, ‘Like what are some of your bullet points that you were going to talk about, because I need to fast track this.’ He hadn’t written anything up, but he had some ideas, and I was like, ‘Oh, this is all really good. This is a jumping-off place.’ I was honored to do it. Very happy to understudy Ty Burrell.”

In addition to asking Burrell, 55, for advice on how to make the ceremony as perfect as possible for the newlyweds, the Take Me Out star was inspired by his own July 2013 wedding to Justin Mikita. “I knew that Sarah and Wells wanted it to be a funny, lighthearted ceremony. They’re not serious people, but you also don’t want to lean too heavily into the jokes because it’s a big day,” Ferguson explained. “My husband and I had … this really lovely, beautiful ceremony for us, and it meant so much to me. I actually looked at that ceremony again before writing one for Sarah and Wells, so you know, heart is important.” 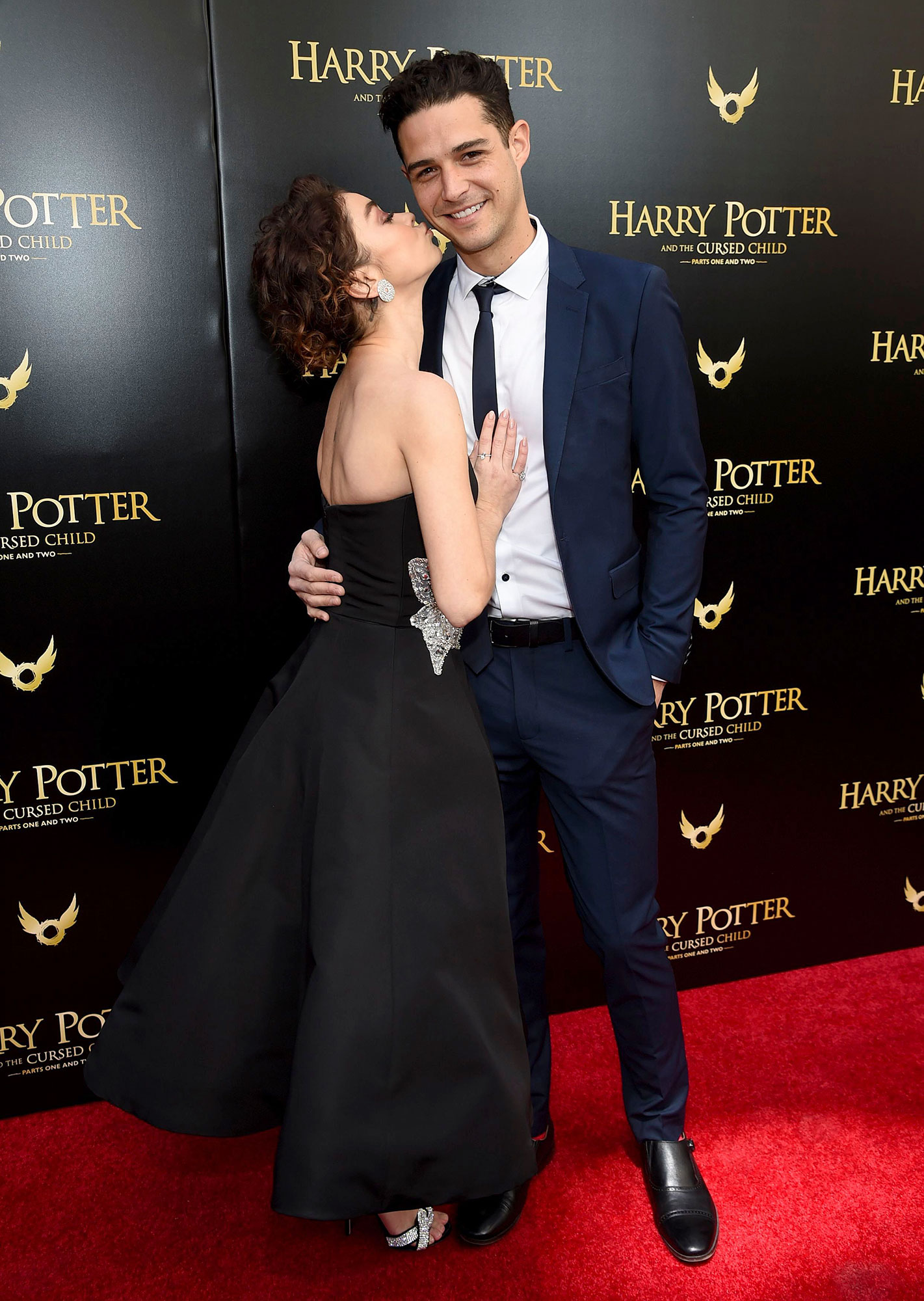 While Burrell’s presence was missed on the big day, the Ivy + Bean actor told ET that the Modern Family cast — including Sofia Vergara, Julie Bowen, Nolan Gould and Ariel Winter — had a wonderful time celebrating their former costar’s wedding. “I mean, it was so good to see everyone,” he gushed. “I’ve seen almost everyone individually, so to see everyone in a group, or at least a large group of us together — we went right into it.”

While Vergara, 50, was on hand for the nuptials, her husband, Joe Manganiello, was noticeably missing on the big day. “Joe’s work schedule prevented him from attending,” a source told Us Weekly exclusively shortly after the wedding, adding that the America’s Got Talent judge brought her son, Manolo Gonzalez Vergara, as her plus one.

Us confirmed in October 2017 that Hyland and Adams, 38, had begun dating after hitting it off on social media. The Bachelor in Paradise bartender popped the question in July 2019 with a romantic proposal on the beach. The couple’s engagement lasted over two years as they were forced to postpone their nuptials multiple times due to the coronavirus pandemic.

“Third time’s a charm,” Adams exclusively told Us in January about their long-awaited wedding date. “We were doing the math and we’ve been engaged longer than we were dating. That’s not good, but it feels like we’re married.” 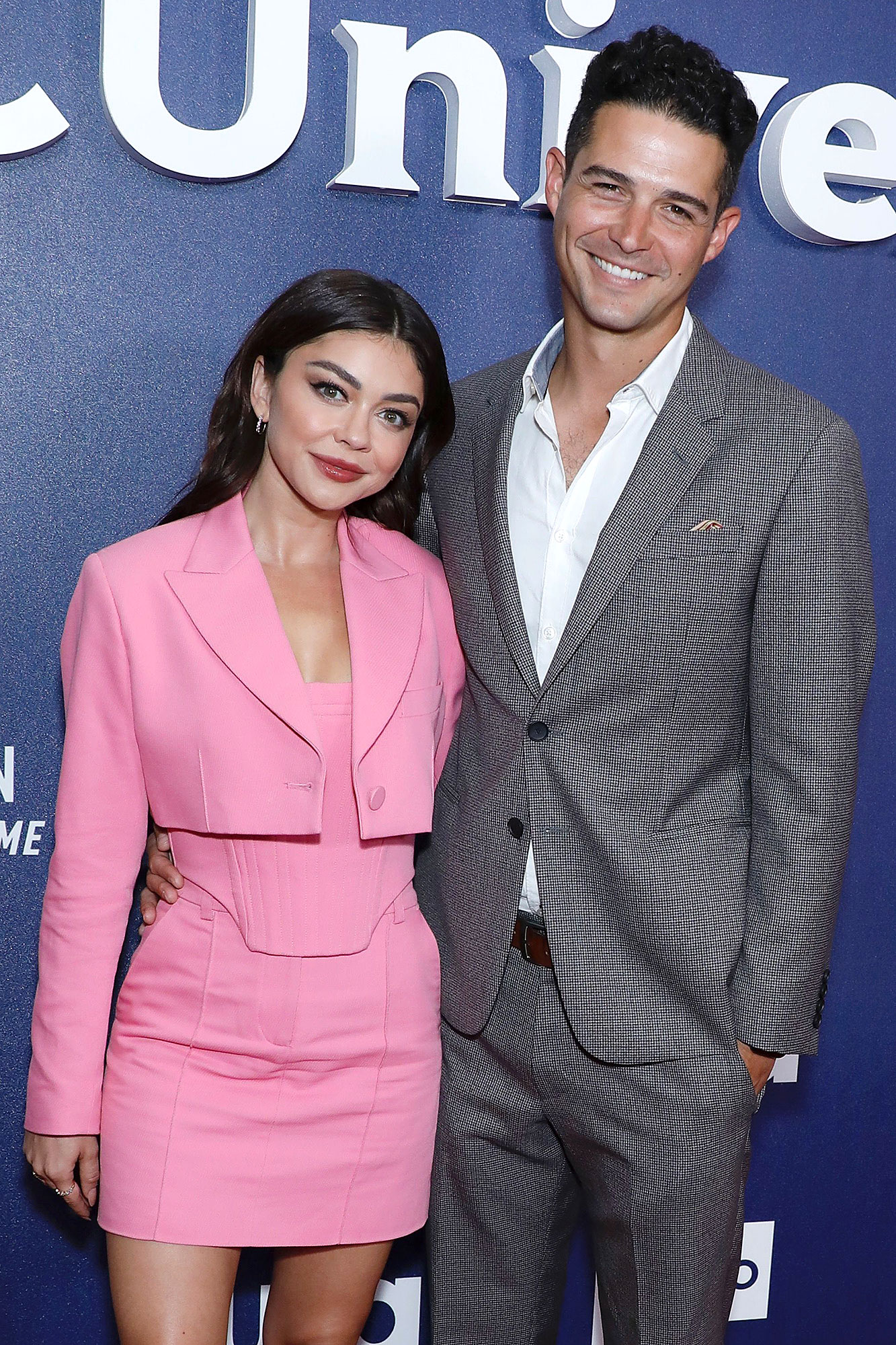 The former Bachelorette contestant continued, “I mean, we bought a house together, we have two dogs together. At this point we just want to have the big celebration for all of our rich friends to give us amazing gifts because I need a Le Creuset, I need a stand mixer for all the things I’m going to cook, and we don’t have that yet. So the heads of ABC and Disney, we need you to get in that registry soon!”

Sarah Hyland and Wells Adams: A Timeline of Their Relationship

The twosome finally tied the knot on August 20, surrounded by their family, friends and members of Bachelor Nation. “Ladies and gentlemen… The Adams Family ✨🌙,” Hyland and Adams wrote via Instagram on August 24 alongside a series of photos from the big day.