Why so many women are choosing to be solo mothers

“Looking back, some of the more fun and exciting times in my life happened when I was single,” says the 41-year-old Geelong PR executive. “I was happy to travel alone, go to a movie alone and eat alone. 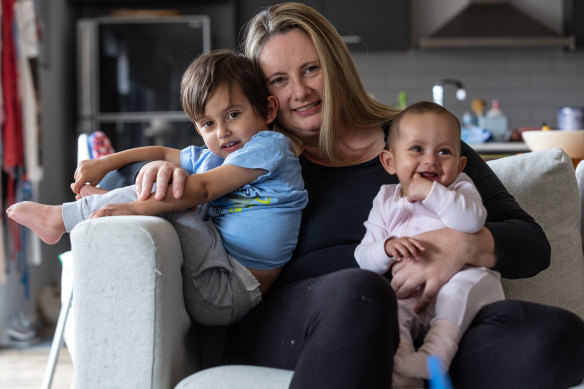 “When I was in a relationship, I would never feel fully comfortable and happy – almost a little tied down.”

Yet when it came to wanting children, the longing was strong. “I felt that aching to be a mum, which, in my mind, was something totally separate to being married.” So she decided to go it alone.

Today, Cooper-Moore has two children: three-year-old Jonathan and six-month-old Aisling. Both are sperm donor children, conceived via IVF, and they are being raised by Cooper-Moore and her mother, who lives with them.

“She provides a lot of that mental and emotional support for me, as well as doing a lot of the care and entertaining of the kids,” she says. “My dad also comes around and happily takes my son out for a drive.”

At first, Cooper-Moore says the plan was to just become a mum. Her fertility wasn’t in “a great place”, but she was successful in conceiving Jonathan and had two spare embryos left.

“I remember saying to mum, ‘I can’t leave them behind, I should try for a second baby’,” she recalls. “So I tried one in June 2021 with full confidence, but it didn’t stick. I was absolutely devastated and definitely grieved for that little embryo. Fortunately, the very last embryo stuck.”

Cooper-Moore is part of a growing trend of women who are choosing to become solo mothers, but national data is hard to come by. Data from the 2021-2022 Victorian Assisted Reproductive Treatment Authority’s annual report shows single women are increasingly using the Voluntary Register to try to connect with a donor, with 60 per cent of users in 2021-22 being mothers by choice.

In Victoria, 804 single women gave birth via donor in 2022, up 15 per cent since 2015. This, however, does not capture the true extent of the national trend.

President of the Fertility Society of Australia Professor Luk Rombauts says when he started working in the assisted reproduction field 20 years ago, solo mothers by choice “were virtually unheard of”.

“We see it now as a rapidly rising trend,” he says.

Rombauts, who is also the national and medical director of Monash IVF, says the company’s statistics show a 65 per cent increase in single women seeking IVF or ART between 2019 and 2021.

“About 1 in 10 are solo mums by choice – that’s a significant proportion.”

Single Mothers By Choice Australia (SMC), an online community and support group founded in the early 2000s by two women from Queensland and initially populated by 30 members, has since grown to more than 2500 Australia-wide, increasing by about 200 members each year.

The reasons to become a solo mum vary. Some women, like Cooper-Moore, don’t feel having a partner is integral to starting a family. Others, like Sydney doctor Lucy Jones, 42, feel they are running out of time despite dating frequently, and want to take control.

“I started the IVF journey when I was 38 years old and hadn’t had luck meeting anyone,” Jones says. “At the time, I was still going on dates and meeting some lovely men, but by that age these men had families already and didn’t want more kids”.

Like Cooper-Moore, she decided to go it alone. The decision, however, was more bittersweet: as someone who had always wanted a partner to have a family with, Jones had to first “go through a grieving process for the life I wanted to have”.

The costs – and time – are also astronomical. Cooper-Moore estimates all up it cost her $30,000; Jones cites similar figures.

“It’s a gigantic expense. First, there’s the costs for artificial insemination, for which I had two rounds each costing around $3 to 4k. Since they were unsuccessful I had to move onto IVF, for which I was given a quote for just under $20,000, to be paid upfront before a Medicare rebate of around $5 to 6k,” Cooper-Moore says.

There is also the cost of medication, fees on drawing on the super, and psychiatrist appointments. “It just drained my savings account and I drew on my superannuation.”

Jones, who took a while to become financially established, says picking the right sperm donor was vitally important. While initially she turned to local sperm banks, she was given only two options, neither of which met her criteria.

“I wanted to avoid things like inheritable disease and had a list of medical, psychological and personal qualities that I wanted,” she says. “So I went to the US, where there is a lot more availability and people to choose from”.

Both women are financially stable, have strong family and friend support and believe that in many ways, being a solo mother by choice is easier than having to negotiate parenting and domestic duties with partners.

“My kids don’t see me stressed about some guy who is not putting in his fair share – they just see me as a hardworking mum who wants the best for them,” Cooper-Moore says. “As for the criticisms I get for denying them a father, there’s a lot of kids out there who don’t have fathers through other, sometimes tragic means, or because their dads have walked out on them.”

Jones agrees. “A lot of the stressors that come with parenting appear to be differences in opinion around shared workload and the mental load – I don’t have to worry about tip-toeing around the partner, or who’s doing most of the work.