Wife is shocked after her husband shares strange admission

A husband has made a strange admission to his wife about her personality after openly discussing if they’ll have children or not.

The married couple previously didn’t want kids, though this changed when the wife turned 30.

The husband said he ‘could be persuaded’ to have kids but is concerned about how she would handle raising a child.

The woman shared details of the situation on Mumsnet and asked for advice from other parents. 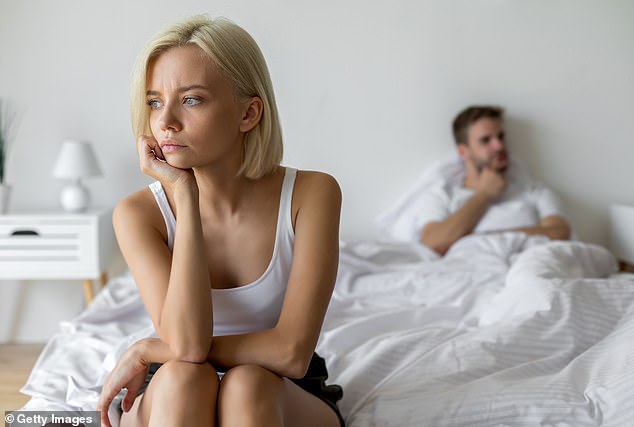 A married couple were discussing whether they should have kids. The husband said he ‘could be persuaded’ to have kids, but is concerned about how his wife would handle raising a child (stock image)

‘DH [darling husband] and I have been together for many years and we had previously both agreed that we didn’t want any children,’ the wife wrote.

‘Since I’ve turned 30, all of that seems to have changed and I’ve been constantly feeling broody and longing for a child. It’s a sort of maternal ache I’ve never felt before.

‘When raising it with DH he was quite shocked and certainly didn’t seem keen.’

Financially the couple are in a ‘great position’ to start a family, but the husband raised his one worry.

‘His main concern is my personality, as to whether I’d cope with a baby and whether I’d regret the decision down the line,’ the wife continued, admitting she is ‘naturally a worrier and over-thinker’ while her husband is ‘very calm’.

‘If anything I’m highly strung. I do tend to be stressed easily and I don’t deal particularly well with challenges and stressful events. I also grew up as an only child and I’m still a bit selfish,’ she said.

The wife asked herself and others if she’s being ‘unreasonable’ to think she’d be able to cope with being a new mum.

Hundreds shared the advice on the matter and opinions seemed divided.

‘Loads of people with all sorts of personality traits manage to parent successfully. You sound quite like me, and while I certainly haven’t found parenting easy, my kids are in fairly good shape so far!’ one woman wrote.

‘Having a kid may be just the thing you need!’ another said.

A third added: ‘It’s not about your personality per say but how you’re going to adapt and change to make way for a baby – and also if you need to work on any parts of yourself that you wouldn’t want a baby picking up on/learning from.’

Another explained how when you have children there’s ‘no guarantees’.

In the comments the wife responded and wrote: ‘To answer the questions, I’ve never been worried to the point of having anxiety attacks or similar, but I do find myself worrying and ruminating on things that other people probably take more in their stride.

‘At times, I’m not a great sleeper due to over thinking.’