William's deeply personal tribute to his 'Grannie' the Queen

William’s deeply personal tribute to his ‘Grannie’: Prince of Wales thanks the Queen for her ‘kindness’, the ‘guidance’ she gave Kate and for being there on ‘the saddest days’ of his life

Prince William paid a deeply personal tribute to his ‘Grannie’ the Queen, saying that she was by his side on the ‘happiest and saddest days of my life’.

The Prince of Wales, 40, said in a statement released on Instagram that while the world was mourning the loss of an ‘extraordinary leader’, he had lost his ‘grandmother’.

He referenced the family holidays they spent with his children George, nine, Charlotte, seven, and Louis, four, and thanked the Queen for the support and guidance she gave to him and Kate. 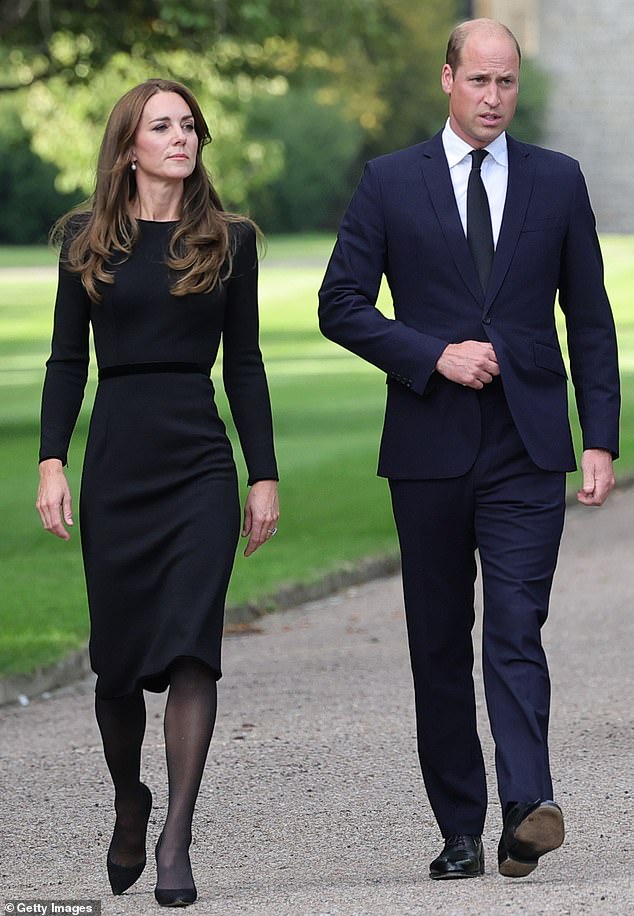 Prince William paid a deeply personal tribute to his ‘Grannie’ the Queen, saying that she was by his side on the ‘happiest and saddest days of my life’. Pictured, the Prince and Princess of Wales during their walkabout at Windsor Castle yesterday 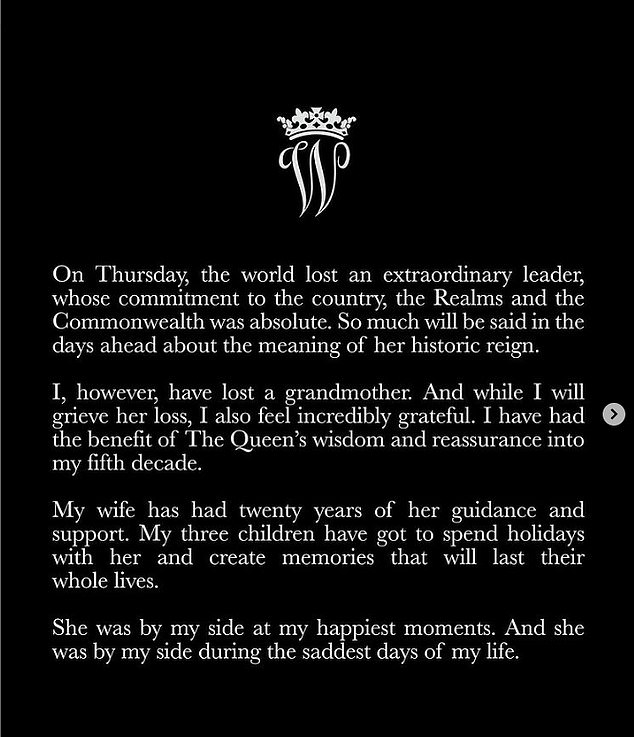 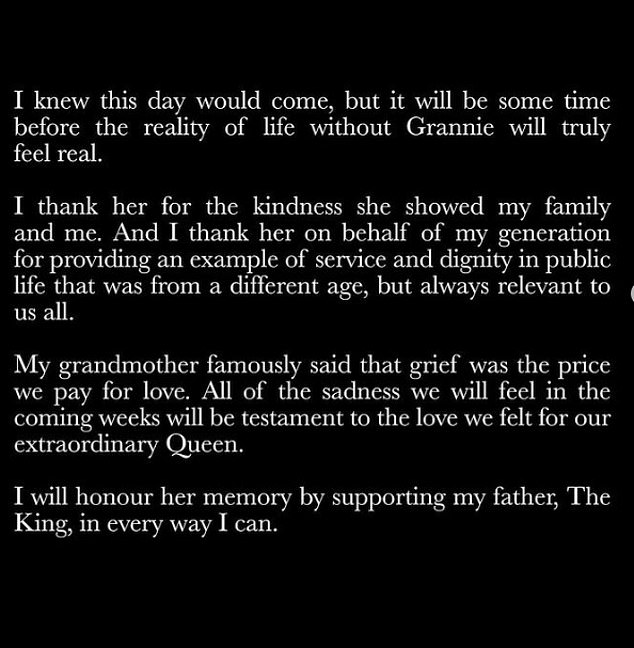 The Prince of Wales, 40, said in a statement released on Instagram that while the world was mourning the loss of an ‘extraordinary leader’, he had lost his ‘grandmother’

It comes after the Prince and Princess of Wales joined the Duke and Duchess of Sussex for an impromptu walkabout at Windsor Castle.

William wrote: ‘On Thursday, the world lost an extraordinary leader, whose commitment to the country, the Realms and the Commonwealth was absolute. So much will be said in the days ahead about the meaning of her historic reign.

‘I, however, have lost a grandmother. And while I will grieve her loss, I also feel incredibly grateful. I have had the benefit of The Queen’s wisdom and reassurance into my fifth decade.

‘My wife has had twenty years of her guidance and support. My three children have got to spend holidays with her and create memories that will last their whole lives.

‘I knew this day would come, but it will be some time before the reality of life without Grannie will truly feel real. 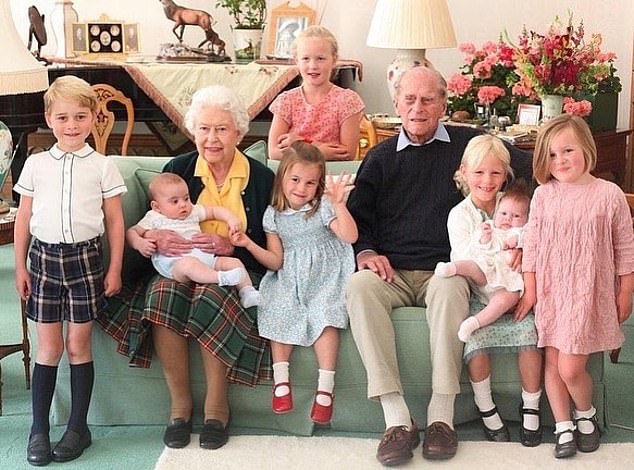 William referenced the family holidays they spent with his children George, nine, Charlotte, seven, and Louis, four. Pictured, the Queen and the Duke of Edinburgh with some of their great-grandchildren, including George, Louis (on her lap) and Charlotte

‘I thank her for the kindness she showed my family and me. And I thank her on behalf of my generation for providing an example of service and dignity in public life that was from a different age, but always relevant to us all.

‘My grandmother famously said that grief was the price we pay for love. All of the sadness we will feel in the coming weeks will be testament to the love we felt for our extraordinary Queen.

‘I will honour her memory by supporting my father, The King, in every way I can.’

Yesterday, the King ordered his warring sons to set aside their ongoing feud ahead of the Queen’s funeral, leading the pair to reunite in public for the first time in more than a year.

Royal sources say Prince William attempted to bury the hatchet by extending an ’11th-hour olive branch’ to his younger brother Prince Harry, by asking him to join him on a walkabout outside Windsor Castle following a phone call with his father Charles. 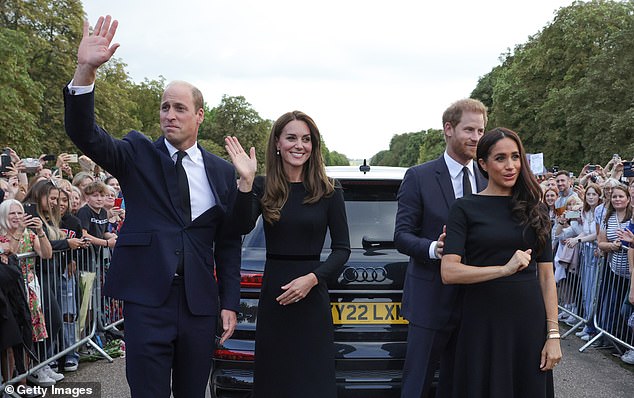 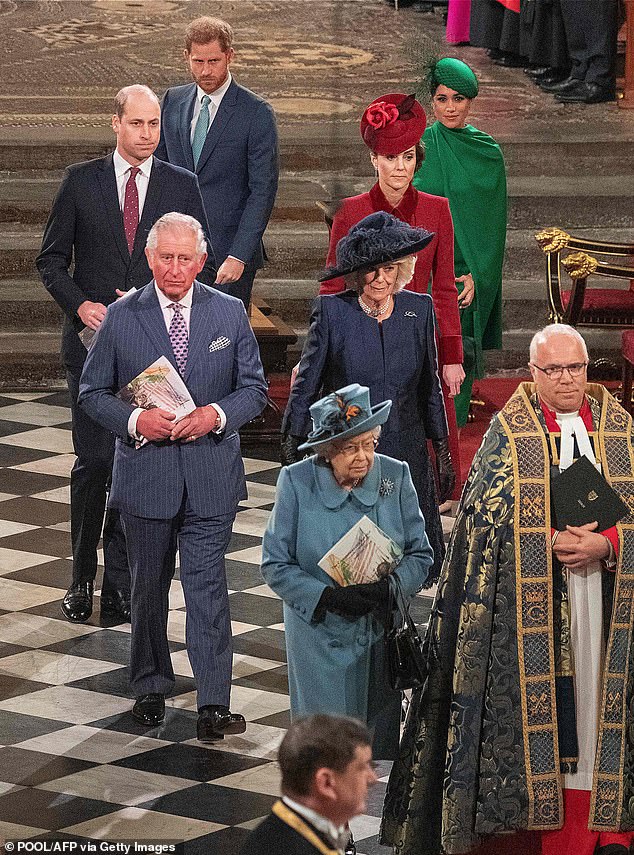 Experts predict the moment could prove a turning point in the frayed relationship between newly-titled Waleses and the Sussexes (pictured here together in 2020), who have been at odds following a number of damaging interviews by Harry and Meghan about the royals

In a scene that clearly delighted royal fans, who had come in their hundreds to the gates of the Windsor estate to mourn the Queen’s death, William and Harry walked out side-by-side with wives Kate and Meghan.

The two couples went on an 40-minute walkabout inspecting the sea of floral tributes laid outside the gates of the royal estate in honour of the much-loved monarch.

Experts predict the moment could provide a turning point in the frayed relationship between newly-titled Waleses, and the Sussexes, who have been at odds following a series of damaging interviews by Harry and Meghan.

The Montecito-based Sussexes were consequently in the UK on a pseudo royal tour when the Queen’s health suddenly deteriorated on Thursday. 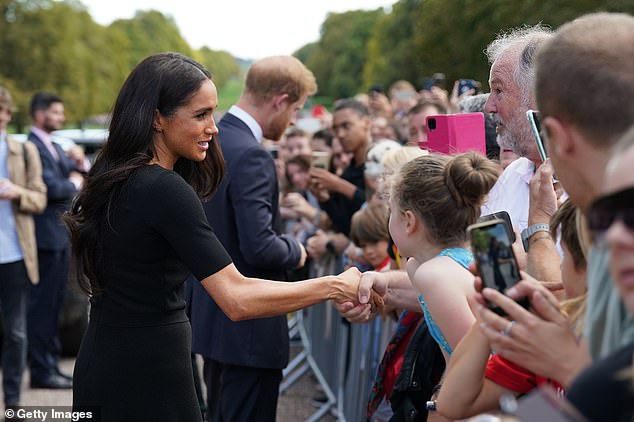 In a scene which delighted royal fans, who had come to the gates of the Windsor estate mourn the Queen’s death, William and Harry walked out side-by-side wives Kate and Meghan (pictured) 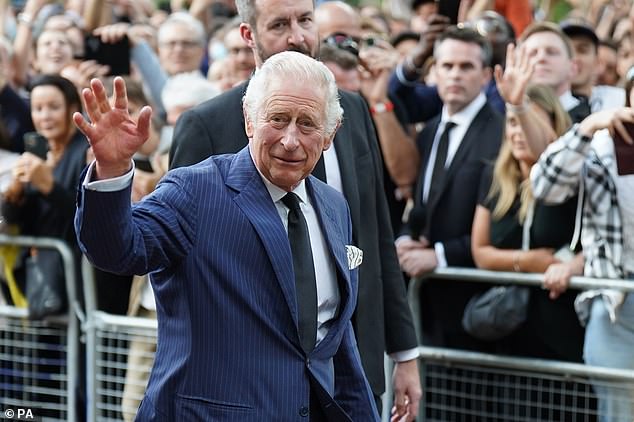 King Charles III greets members of the public outside Clarence House, London, after he was formally proclaimed monarch by the Privy Council, and held audiences at Buckingham Palace

It is believed the Sussexes had not previously made any plans to meet with the Waleses, despite staying in Frogmore Cottage, just 700 yards from William and Kate’s Adelaide Cottage. However both William and Harry raced to Balmoral on Thursday after it became clear the Queen’s health was faltering.

A Kensington Palace spokesperson said that the Prince of Wales had invited the Sussexes to join him and the Princess of Wales during yesterday evening’s walkabout.

However, according to The Times, the camps required extended negotiations beforehand which delayed their arrival by 45 minutes.

A senior Palace source said: ‘The Prince of Wales invited the Duke and Duchess of Sussex to join him and the Princess of Wales earlier.

‘The Prince of Wales thought it was an important show of unity for the Queen at an incredibly difficult time for the family.’

King Charles III was formally proclaimed in a historic ceremony at St James’s Palace in London.

He made a personal tribute to his ‘dear mama’ before vowing to uphold the British constitution.

Later he was driven to Buckingham Palace, where he held audiences with Prime Minister Liz Truss, senior members of her Cabinet, and the Archbishop of Canterbury;