Follow
Home » Lifestyle » Wish you weren’t here: how hateful postcards have been re-addressed

Wish you weren’t here: how hateful postcards have been re-addressed

To most of us, postcards are generally frivolous pieces of communication – brief notes dashed off with little thought. As ephemeral as they are now old-fashioned.

But in the hands of Wiradjuri artist Karla Dickens these outmoded curiosities become a devastating commentary on the casual racism, marginalisation and cruelty of Australia at the turn of the 20th century. The exhibition, which opens at Carriageworks on January 6, also inevitably asks the question whether much if anything has since changed. 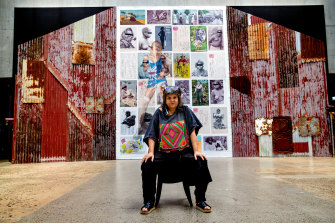 Karla Dickens with part of her monumental work, Return to Sender, at Carriageworks.Credit:Edwina Pickles

The work is composed of two vast triptychs assembled from corrugated iron and other found objects, with the central panel occupied by an assemblage of vastly enlarged postcards. Many of the subjects of the postcards are Indigenous women, often partially naked. Together they make an unbearable tableau of salacious exploitation.

Dickens makes no apology for how uncomfortable her work makes – or at least should make – the viewer.

“This country was settled on rape and theft of land,” she says. “I’ve been making work about the abuse of Aboriginal women for years and years. It kind of gets overlooked. I think they are very telling of Australian history and how the women were treated.”

Dickens has covered each of the subject’s eyes with a black bar in the style of newspapers from the 1970s and ’80s.

“They did it to protect victims,” she says. “But the way I also see it is the individuals in these photos don’t even want to look out. They don’t want to look at people looking at them. It’s giving them some dignity.”

The messages on the postcards, written mostly in the copperplate hand of the “educated” colonisers range from the banal to the outright racist, such as the comment “How is this for style” underneath an image of a half-naked woman.

Collecting objects to tell stories about the past has always formed a central part of Dickens’ practice. The corrugated iron, for instance, references the story of her grandmother, who lived in a “humpy” next to Sydney Airport.

The pandemic forced Dickens to take her collecting habit online into markets such as eBay, where she found plenty of the postcards that form the centre of the work. She stored them in a biscuit tin where they almost radiated their emotional power.

“Some of them, these images I’d take out of the tin and kind of hold on my heart and have a little look and then put them back,” she says.

Now based in Lismore, Dickens was born in Darlinghurst and grew up around the inner city. Her grandparents were strong influences and she credits her grandfather with awakening her fascination for collecting items from the tip to use in her art.

Her teen years were a dark time but after a period in rehabilitation she attended the National Art School.

That personal history and the wider story of the oppression of First Nations’ people is forever present in her work.

“I’m affected by the history of this country, day in and day out,” she says. “So all my work’s heavy. I was an angry teenager. I was really destructive. I’ve been working for over 30 years to change myself and to do that, I’ve had to look at hard truths about myself. And that’s reflected in my art. It’s healing.”

The title of the Carriageworks show, Return To Sender, is an obvious riff on the postcards but it also carries another meaning – a message to those who would impose their racism and oppression on Indigenous people.

“We’ve carried it long enough,” says Dickens. “You take it back.”