With little surprise or bite, Coming 2 America is a lacklustre sequel

Batman can always face new enemies, Sherlock Holmes can solve new mysteries, and Dracula can rise from the grave over and over. But in a genre like romantic comedy, adding a fresh chapter to the story is harder to justify. 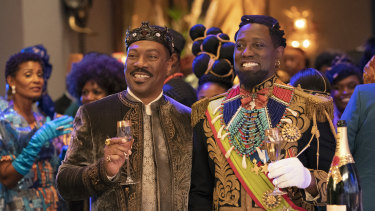 Consider John Landis’ 1988 hit Coming to America, in which the hero Prince Akeem (Eddie Murphy) travels from his mythical African kingdom of Zamunda to the borough of Queens. Disguised as a humble immigrant, he gets a job at a fast food counter and ultimately falls for Lisa (Shari Headley), the daughter of his boss (John Amos).

Like so many romantic comedies, the film is a fairy tale – and once the obstacles to true love have been cleared away, what’s left for the characters to do except live happily ever after?

While Coming to America wasn’t exactly beloved by critics at the time, thirty years on it all looks pretty charming. As with other Landis classics such as The Blues Brothers or An American Werewolf in London, much of the appeal stems from the matter-of-fact combination of unexpected elements: Akeem’s naïve nobility inverts Murphy’s more familiar wiseguy persona, while the operetta whimsy is counterpointed by profane jokes about the scunginess of New York or the libido of the all-powerful King Jaffe (James Earl Jones).

Very little of this surprise or bite persists in the lacklustre Coming 2 America, the sort of belated sequel that barely pretends to be more than an exercise in nostalgia. The main setting this time is Zamunda itself, an opulent storybook land that bears roughly the same relation to the actual Africa that the realm of the Arabian Nights does to the Middle East. 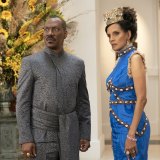 Eddie Murphy and Shari Headley in a scene from Coming 2 America.Credit:

Craig Brewer (Dolemite Is My Name) replaces Landis as director, but the original screenwriters Barry W. Blaustein and David Sheffield are among those credited with the story, which has the middle-aged Akeem learning that he fathered a son, Lavelle (Jermaine Fowler), in a one-night-stand back in Queens.

Akeem now has three daughters with Lisa but no male heir, a handicap in his diplomatic negotiations with General Izzy (Wesley Snipes), ruler of the kingdom next door. Thus he seizes on the mild-mannered Lavelle, who is brought to Zamunda along with his mother (Leslie Jones) and uncle (Tracy Morgan), and must face a series of traditional challenges before he can be recognised as a prince.

All this takes a while to unfold, given the necessity of providing screen time for a raft of characters old and new. Murphy once again appears not just as Akeem but in several other guises, aided by elaborate makeup; Arsenio Hall, reprising his role as Akeem’s manservant Semmi, pops up elsewhere in the same way.

The other legacy cast members are comparatively wasted. Jones, so sly in the original, has hardly more than a cameo, and Headley gets little chance to explore what Lisa’s fairy-tale marriage may have entailed for her in practice. As for the newcomers, Jones and Morgan riff in the manner expected of them, while Akeem’s oldest daughter Meeker (KiKi Layne) and Lavelle’s love interest Mirembe (Nomzamo Mbatha) compete for our attention in separate scenes.

Murphy as Akeem gets enough screen time to indicate he’s still the lead – but as an authority figure operating on home turf, the character is less comic in his own right than a regal foil to the wackier types around him. There’s also little sense of an emotional connection with his newly-discovered son, one reason the story remains so oddly lacking in stakes and focus.

The net result is that almost everything feels like padding, including the occasional musical numbers and the constant recycling of gags from the first time round, seldom in a manner that adds anything fresh. The echoes of the original fish-out-of-water premise are especially hard on Fowler, who is personable enough but never purports to be anything like the comic powerhouse Murphy was in his prime.

In one especially desperate scene, Lavelle and Mirembe riff on the weaknesses of current American cinema, including the over-supply of “sequels to old movies nobody asked for”. That lets us know that the filmmakers are under few illusions, but it feels like self-awareness carried too far.

bite, Little, or, surprise, With
You may also like:

How to achieve a natural-looking glow with a face tan

BEL MOONEY: As with so many, Covid made Philip's funeral intimate

BEL MOONEY: As with so many, Covid made Philip's funeral intimate

What is thalidomide and what was the Contergan scandal?

At Least 3 Dead In Shooting Near Austin Shopping Plaza: Officials