A mother has divided opinion after saying she doesn’t believe her husband should have a say in how she spends her money.

The anonymous woman, thought to be UK-based, took to parenting forum Mumsnet to ask others for their thoughts on the situation.

Her post was titled [Am I being unreasonable] To think DH does not get to decide how I spend my money or how much I spend?’.

In it, she detailed her fraught situation, revealing that she was planning to instruct lawyers to represent her in a defamation case. However, her husband wanted her to use a cheaper firm. 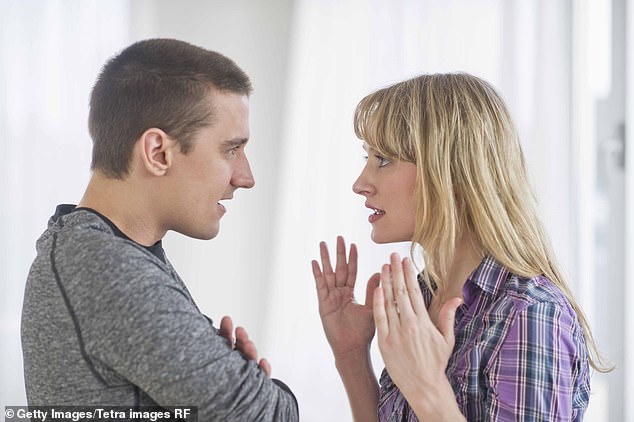 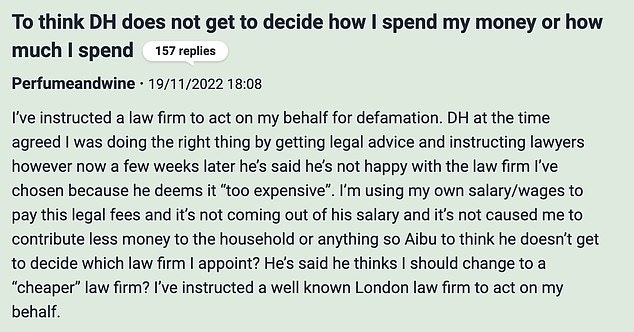 In the post, the woman revealed that she wanted to spend on her on bringing a defamation case, but her husband was concerned about the cost

The post provoked a range of responses, with many people saying that in principle, they feel large expenses are a matter for the family to decide.

In it, she wrote: ‘I’ve instructed a law firm to act on my behalf for defamation.

‘Dear husband at the time agreed I was doing the right thing by getting legal advice and instructing lawyers however now a few weeks later he’s said he’s not happy with the law firm I’ve chosen because he deems it “too expensive”.

‘I’m using my own salary/wages to pay this legal fees and it’s not coming out of his salary and it’s not caused me to contribute less money to the household or anything so Aibu to think he doesn’t get to decide which law firm I appoint?

For many Mumsnetters, the principle of the matter was the key issue, with many pointing out that for large outlays, both partners should be able to have their say

‘He’s said he thinks I should change to a “cheaper” law firm? I’ve instructed a well known London law firm to act on my behalf.’

A number of respondents felt like her husband was entitled to have an opinion, with one writing: ‘I think he has the right to comment if he thinks something is very expensive – even if it’s not coming out of his money. Surely people can say things like that to family members?’

Another added: ‘I think for big purchases, and this does sound like a big purchase, then it is fair to discuss it before committing.

‘We do that and neither has ever vetoed the other, but then we are also reasonable in our spending.

Other posters noted that it isn’t just a case of the poster’s outlay now, but any potential costs that could be incurred which could affect her partner too

‘You must be earning a lot to be able to embark of a court case for defamation.’

And a third agreed, writing: ‘Of course he has the right to an opinion but if you can afford it, he can’t tell you what to do. He’s not your boss.’

For other posters, the initial outlay was not the issue as much as the potential further costs, which could impact the whole family.

One Mumsnetter explained: ‘If you lose and get a costs order against you that you can’t afford to pay and end up bankrupt it will affect your DH and the family finances.’

And another agreed, writing: ‘Of course he should have a say. If you lose and have to pay costs you could both suffer financially given you’re married. The fees could absolutely rack up if you’re using a top law firm. You really do have to have a plan for what you could be facing if you don’t win and at what point you’d be prepared to walk away.’

Meanwhile a further respondent said: ‘Something like a new handbag he has no right commenting but this could ultimately affect him if you had to pay huge legal costs for example. He can’t demand you do anything but I think he’s got a right to be concerned and researching something like this.’

However, a minority others felt that as the poster was planning to spend her own money on the case, it should be entirely her decision.

One wrote: ‘As long as you can afford it, I don’t think you are at all unreasonable. It’s a pity you told husband the cost.’

Another added: ‘Its your money and upto you how you spend it. He can voice his opinion but its your decision and sounds like you feel very strongly about this one.

‘We usually argue about how much money I want to spend on a holiday but when there’s 7 of you its always going to be more expensive. Good luck with your case x’

And a third simply wrote: ‘Yanbu [you are not being unreasonable]. Your money, your case.’