A woman divided opinion after revealing she feels ‘silenced’ by a new friend who does not want to listen to upsetting stories about her traumatic childhood.

The poster took to UK-based parenting forum Mumsnet to explain that she had wanted to share details of her ‘extremely toxic and abusive childhood’ with her ‘relatively new friend’ when she came to stay for the weekend.

After initially bringing up the topic earlier in the day, the poster tried to revisit the discussion but was told it was ‘too sad’ to talk about. She said it left her feeling ‘hurt’ and ‘confused’.

Many respondents felt that the poster was being deeply unreasonable by wanting to ‘trauma dump’ on the friend, with several telling her to get a therapist if she wanted to work through her difficult past.

However, others felt the friend was being unfair, with some saying that they would have listened to the poster’s conversation. One even branded the friend ‘self-centred’. 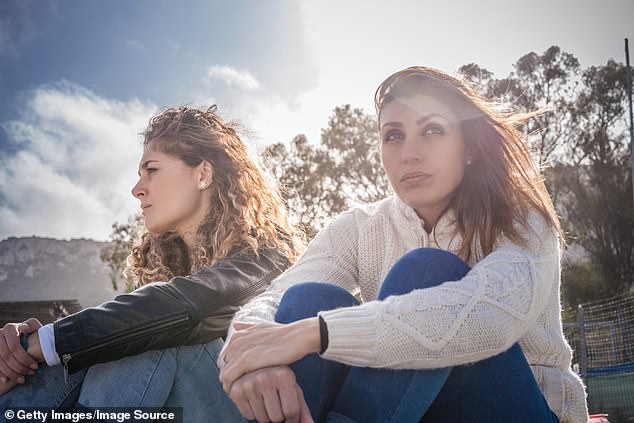 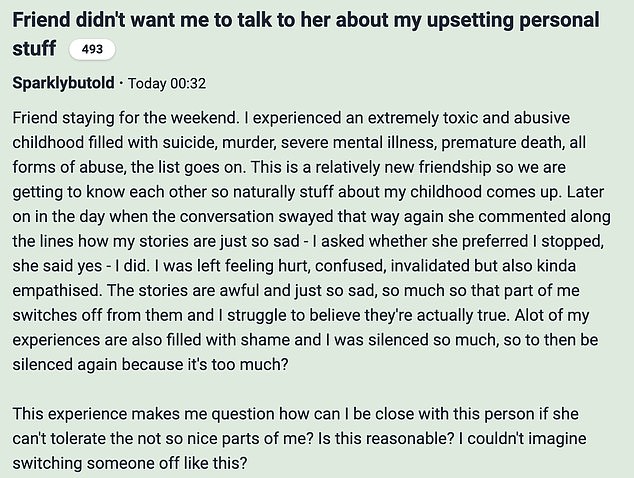 According to the anonymous poster, the new friend’s reluctance to keep talking about her traumatic past made her question whether the two can really be friends

The post read: ‘Friend staying for the weekend. I experienced an extremely toxic and abusive childhood filled with suicide, murder, severe mental illness, premature death, all forms of abuse, the list goes on.

‘This is a relatively new friendship so we are getting to know each other so naturally stuff about my childhood comes up. Later on in the day when the conversation swayed that way again she commented along the lines how my stories are just so sad – I asked whether she preferred I stopped, she said yes – I did.

‘I was left feeling hurt, confused, invalidated but also kinda empathised. The stories are awful and just so sad, so much so that part of me switches off from them and I struggle to believe they’re actually true.

‘A lot of my experiences are also filled with shame and I was silenced so much, so to then be silenced again because it’s too much?

‘This experience makes me question how can I be close with this person if she can’t tolerate the not so nice parts of me? Is this reasonable? I couldn’t imagine switching someone off like this?’

A huge number of respondents felt the poster was being unreasonable by offloading their trauma onto the new friend, with several suggesting she get to therapist with whom she can work through the issues.

One wrote: ‘I think sharing that level of trauma is a bit intense for a relatively new friendship.

‘Your friend has every right to not want to take on the information, she is not silencing you, she is establishing boundaries. She may also have her own traumas that you are triggering.

‘If you need to lay out your past, find a therapist.’

Another was more forthright, saying: ‘Oh come on, be reasonable. I am so sorry for what you’ve been through, but she’s your friend, not your counsellor. And had probably only signed up for a fun girls’ weekend away.’

And a third added: ‘I’m so sorry for what you’ve been through, but it’s very unreasonable to expect a friend, especially a very new friend, to act as a therapist or an emotional sounding board. That’s too much for almost anyone.

‘If you need a therapist, you really should find one.’

A number of respondents took issue with the poster’s use of the word ‘silenced’, explaining that the friend may also have trauma and may not want to handle these conversations

For others, the poster’s language about being ‘silenced’ was what stood out, with many saying that the friend wanting a reprieve from the intense conversation could suggest the conversations were triggering to her.

One wrote: ‘If – as you say – it’s a fairly new friendship OP, she may not be ready for that much sharing of information just yet.

‘I don’t see it as ‘silencing’ you, she’s happy enough in the friendship to stay at yours this weekend, you feel that she has to know everything about you to be friends and she doesn’t feel that she needs to know that level of detail. Neither is wrong or right, just different expectations.’ 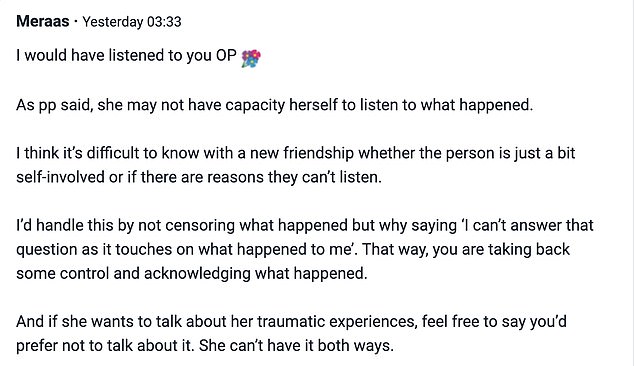 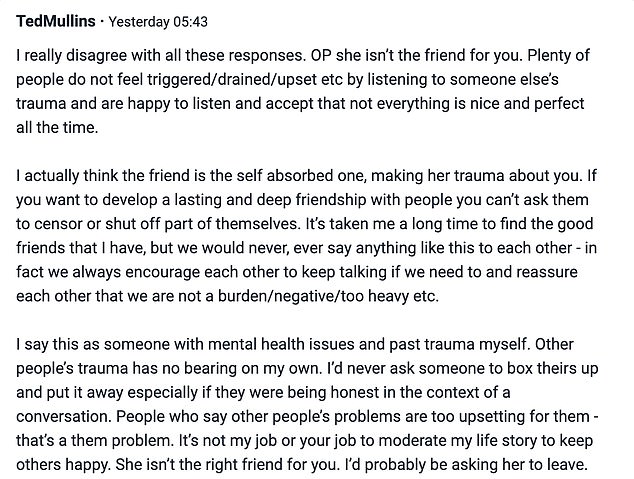 But some respondents were more sympathetic to the poster’s plight, and said they would have been happy to listen to her open up about her past

However, some were sympathetic, and suggested that if they were in the friend’s place, they would be happy to listen to the poster discuss her troubled past. One branded the friend ‘self-centred’.

One wrote: ‘If I were your friend, I would find time to listen. I really struggle to tell friends about myself and my traumas, but I’m ok with listening to other people. It doesn’t make my troubles/mental health worse.

‘I understand that you weren’t asking her for help/counselling. To get to know you, your past matters. Perhaps try baby steps with this, if you feel you want to continue the friendship. I hope you feel better when she’s left.’

Another seemed to feel the same way, adding: ‘I would have listened to you OP. As pp said, she may not have capacity herself to listen to what happened.

‘I think it’s difficult to know with a new friendship whether the person is just a bit self-involved or if there are reasons they can’t listen.

‘And if she wants to talk about her traumatic experiences, feel free to say you’d prefer not to talk about it. She can’t have it both ways.’