Woman stops squirrel thief by using Vaseline on bird feeder: 'They're so greedy'

Raw video: A squirrel finds itself in a slippery situation as it slides down a pole.

A grandmother in the U.K. has found a slick way to handle thieving squirrels.

Sally Stranix, 64, has been smearing Vaseline on the stand of her bird feeder to stop one “greedy” squirrel from feasting on the food she leaves out for winged friends, according to a report from South West News Service.

The gray squirrel in question had been climbing up the feeder Stranix keeps in her garden on a “daily basis” before the grandmother of six decided to try the petroleum jelly product as a deterrent.

Now the persistent, bushy-tailed rodent tries to stop by for a snack but slides right back down the pole before it can reach the feeder.

“I think it’s quite a young squirrel, because it’s quite small, and the bigger ones seem to know how to just jump up to the bird feeder, whereas this one climbs the pole,” Stranix told SWNS. “I’ve been using Vaseline for a few weeks now – it stops the squirrel from getting to the bird food, although it doesn’t stop it from coming back. But every time it tries to climb the pole, back down it goes.”

Prior to using Vaseline, Stranix says she had been searching for squirrel deterrents. However, she opted for this method instead.

Representatives for Vaseline and its parent company Unilever did not immediately respond to Fox News’ request for comment. 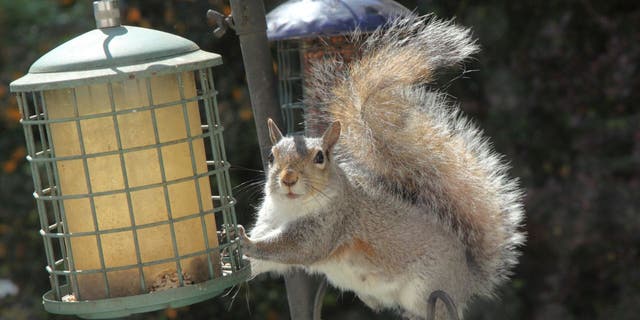 A grandmother in the U.K. says she has stopped a gray squirrel (not pictured) from stealing food out of her bird feeder with Vaseline, according to South West News Service. (iStock)

While the results are entertaining for Stranix and her grandchildren, wildlife experts have warned that petroleum jelly and other oil- or grease-based products can be harmful to squirrels and similar woodland animals.

Similarly, in 2018, the Maine-based Center for Wildlife issued a statement on Facebook that showed petroleum jellies and lubricants can compromise the feathers of birds if a squirrel manages to successfully climb a feeder with the slippery product on its paws and fur. Instead, the nonprofit recommends people use “a well placed slinky or baffle” to deter squirrels and unwanted critters from bird feeders.

Where Stranix lives in Ipswich, a town that’s located in eastern England’s Suffolk County, there is no shortage of squirrels around.

“We live next to a little woods, so having squirrels in the garden is inevitable,” she told SWNS. “But they’re so greedy. I just want some food to be left for the birds. There’s plenty of food for the squirrels to get elsewhere.”

According to the Suffolk Wildlife Trust, gray squirrels have been in the U.K. since the 1800s and have “contributed to the decline of the red squirrel.” The small mammals reportedly eat hazelnuts and food that’s been left in bird feeders, and they also store their food in the fall.

by, SQUIRREL, stops, thief, woman
You may also like: