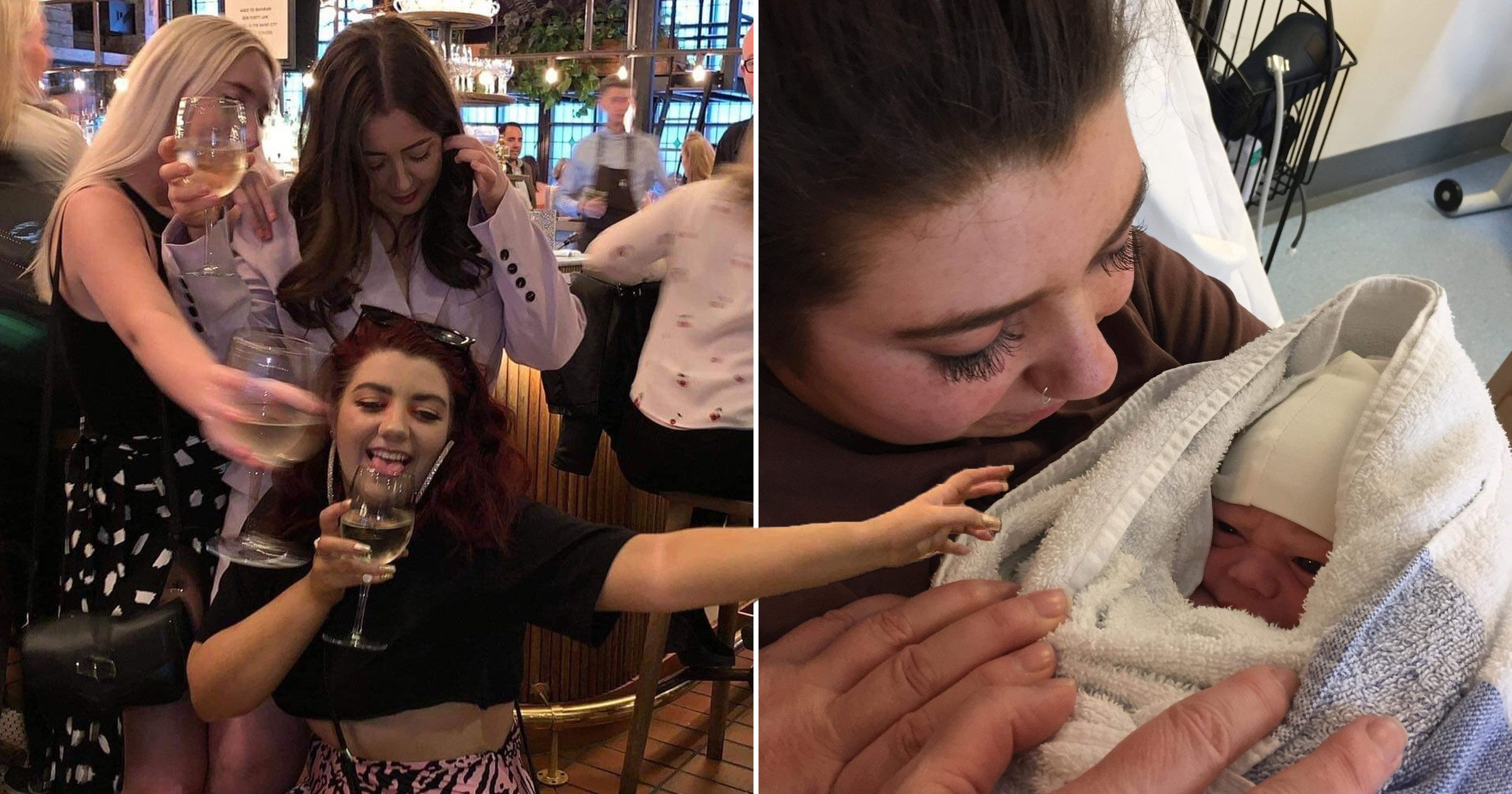 When Sally Smith, 23, woke up the morning after a long shift working at a nightclub, she thought she just had stomach cramps.

But when she looked down, she could see a baby’s head beginning to crown.

Sally had no idea she was pregnant, and had been cluelessly going to festivals and working for the months prior.

The pregnancy – and birth – was a total surprise, as Sally says she used contraception, continued to have periods, and remained a size 10-12.

When she woke up to find she was giving birth, Sally’s sister rushed her to the Queen Elizabeth Hospital in Gateshead, Tyne and Wear, but she gave birth the the surprise baby, Gabriel, in the car park before they could get inside.

While Sally describes the birth experience as the ‘most surreal thing ever’, her son Gabe, who is now one year old, is the ‘best thing that’s ever happened’.

Sally said: ‘I had no idea I was pregnant until I went into labour.

‘I didn’t put on any weight, had no bump and was probably skinnier then than I am now.

‘If I had a drink after work I was always sick and people would joke that I was pregnant and I’d be like “if I was pregnant, I’d be eight months pregnant now” – that was kind of the running joke at work for a while.

‘I had really bad back pain when I was seven or eight months pregnant but that was when I started my new job and I was heaving kegs around all day and moving deliveries, so I put it down to the fact that I was working so much.

‘I went to Poland with my friends the week before I gave birth and was walking really slowly and all my friends were taking the mick like “oh God, come on Sally, hurry up”.

‘I thought I’d pulled something, and that’s what that was.

‘Everything had an answer – there was nothing out of the ordinary.’

Sally remembers waking up at around 10am on March 10, 2020, after a shift as a night club supervisor, with ‘really intense’ stomach cramps.

She rang her sister, who suggested having a bath – then her waters broke.

Sally said: ‘The paramedic walked in and I was lying on the floor and she said “well, we can see a head, you’re definitely having a baby”.

‘The only thing that was going through my mind was that I was in so much pain I kept trying to go to sleep.

‘I would expect I would freak out but I was so calm and just like, “right, this is what I’ve got to do” – there’s no way that I can’t.

‘By the time they got there I was already pushing.

‘We got in the ambulance and we could already see his head and as we were pulling up to the hospital, that’s where I gave birth.

‘I don’t think anything is ever going to top it. It was just a bit crazy.’

After around three to four hours of labour her baby boy was born in the hospital car park at 1:50pm, weighing 5lbs 3oz.

The young mum said that her family were ‘really supportive’ and on hand throughout the entire process.

‘When I was giving birth I remember thinking “well I can’t have a baby, I’m 23, I’ve just been promoted,so how am I meant to look after a baby when I work such long hours? I can’t do it,”‘ Sally recalled.

‘As soon as they put him on my chest I was alright because he was there and completely fine. I was just so calm.

‘Not to sound corny but I was just completely in love.

‘As soon as I held him I was filled with love and totally obsessed with him from the start.’

When she came out of the hospital, the country went into lockdown.

This meant she had to text her friends the shocking news of Gabe’s arrival, prompting quite a bit of disbelief.

The father, who Sally had separated from in July 2019, also wasn’t able to meet his son for the first couple of months.

‘It was hard having a newborn baby but I just pushed through it,’ said Sally.

‘He’s the best thing that’s ever happened to me.’