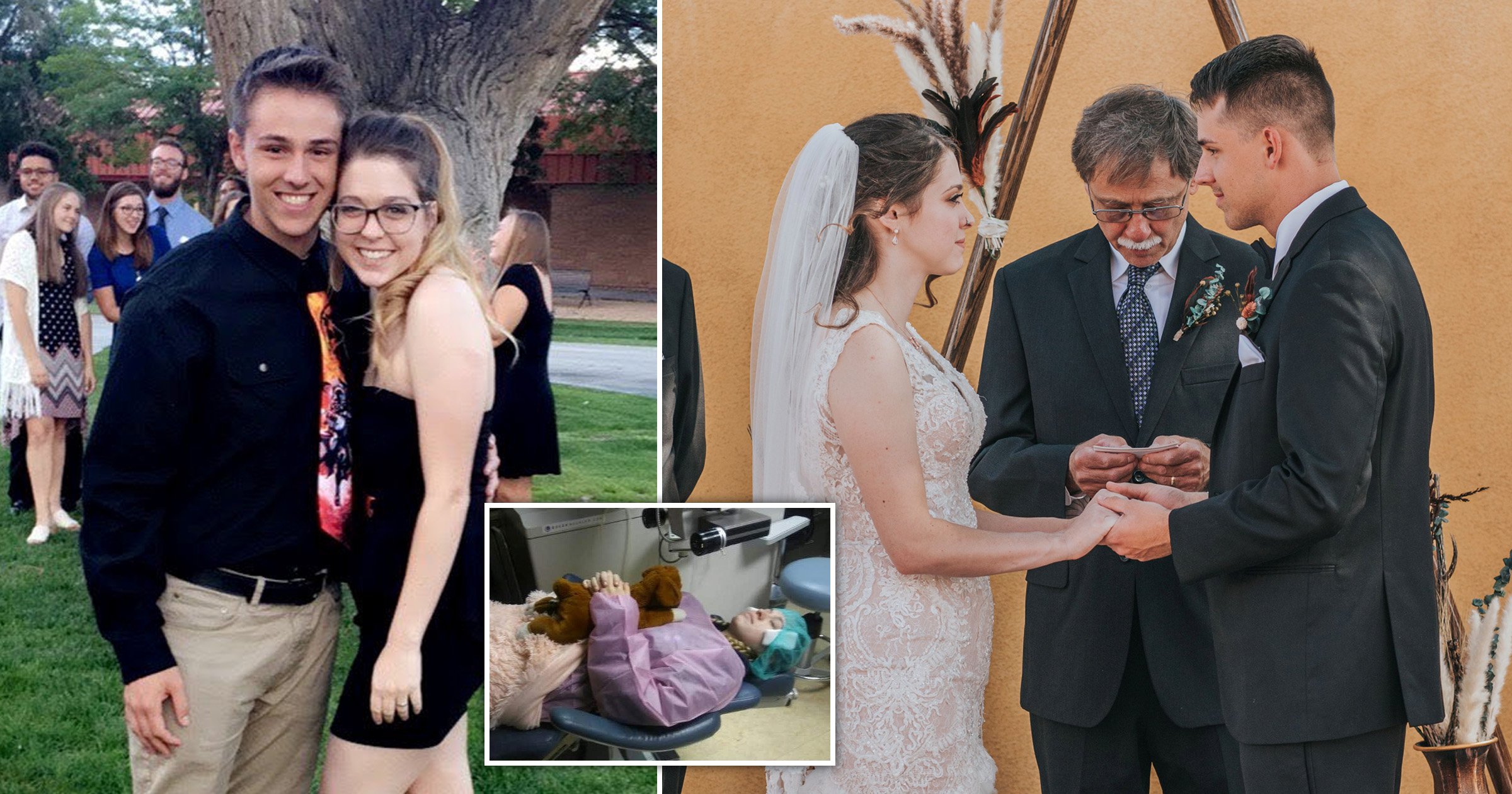 One young couple has given a whole new meaning to ‘love at first sight’ – after a woman who regained her eyesight has shared what it was like to set eyes on her soulmate for the first time.

Sophia was diagnosed with keratoconus – a condition that causes the cornea to lose its round shape.

‘It was terrifying suddenly waking up unable to see and I became very dependent on others to help me. At first I thought it was an allergy attack or something,’ she explains.

‘I drove to school and realised my eyesight was going when I couldn’t read the paper.’

She adds: ‘It was really difficult adjusting, but I was determined to do what I could.’

And adjust she did, moving to study psychology at a university in Colorado.

While studying and working as a residence assistant, she met Christian Corah – and the pair instantly hit it off as friends.

Sophia recalls: ‘Christian supported me the whole time while I was blind. He took care of me and made me feel so special.’

After researching keratoconus, Christian discovered a surgery that could correct Sophia’s eyesight.

‘The only hitch was it cost over £16,000 so I wasn’t very hopeful as my insurance wouldn’t cover it,’ Sophia says. ‘But Christian put a fundraiser up for me and raised the money in five weeks.’

In October 2018, Sophia had surgery to stop the cornea from bending out of shape.

But regaining her vision was a gradual process.

At first, she wore contacts to helps her see – but Sophia explains these were ‘very intense’ and she ‘could only wear them for a few hours at first.’

Her and Christian had stayed in touch – and Sophia soon came to the realisation that no one else made her feel like he did.

In October 2020, she took the plunge and told him how she felt.

‘I decided to travel to see him after I had built up the courage to tell him how I felt,’ she explains.

At this point, Sophia had never seen Christian’s face.

She adds: ‘I couldn’t see what Christian looked like when I met him – with keratoconus my vision meant I could see about 10 eyes all over the place so I couldn’t really piece him together.’

And seeing him for the first time didn’t disappoint.

‘But after I’d calmed down, I realised what a cutie he was. He was even more handsome than I could have imagined,’ she says.

‘I knew I’d fallen for him and had to tell him how I felt. Luckily he felt the same way.’

Now 24, Sophia says it’s clear she fell for 25-year-old Christian ‘as a person’ not for his ‘good looks’.

And the feeling was mutual.

Data analyst Christian adds: ‘As soon as I met Sophia, I was drawn to her. She was such a fighter and she’d never use her blindness as an excuse.’

He calls her resilient, recalling times they would play ping pong when she was blind and how she would beat him at pool.

They began dating in October 2020 and it wasn’t long until Christian popped the question during a visit to a frozen lake in January 2021.

By June that year the two were married.

‘Christian was there for me in the toughest times of my life and supported me and made me feel so special. It brought us so close together,’ Sophia says.

‘It’s been an amazing journey.’