Woman with 'wheelie bin teeth' gets free treatment in Turkey

The Turkish teeth that DID leave a smile! Mother who was bullied for her ‘wheelie bin teeth’ is delighted with her new look after dentist flew her out for FREE £5,000 treatment

A woman nicknamed ‘wheelie bin teeth’ by bullies has got her smile back after a dentist flew her to Turkey for life-changing surgery – when they spotted her on TikTok.

Paige Griffin, 26,from Warsall, Birmingham had been teased for her ‘yellow, black and brown’ teeth since primary school and the nasty comments continued as an adult.

She said she has ‘tormented’ herself over the way her teeth looked, and the bullying became worse when she joined social media platform TikTok because she had one black, one brown and one green tooth.

Paige had almost given up hope when she received a message from SmileDental in May of this year – a dentist in Turkey – who offered to give her a new set of crowns and porcelain veneers for free – saving her £5,030

Now, Paige is delighted with the results despite recent warnings from UK dentists warning the complications can leave patients with huge medical bills to fix shoddy work carried out abroad. 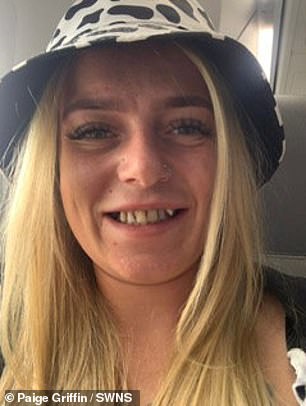 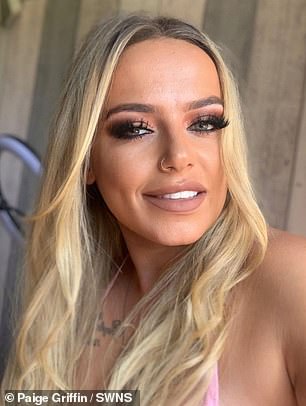 Paige Griffin,26 pictured prior to dental surgery was nicknamed ‘wheelie bin teeth’ and mercilessly trolled on TikTok – she almost gave up hope until the tooth fairy came in the form of Turkish practice SmileDental who offered to fly her over for life-changing surgery 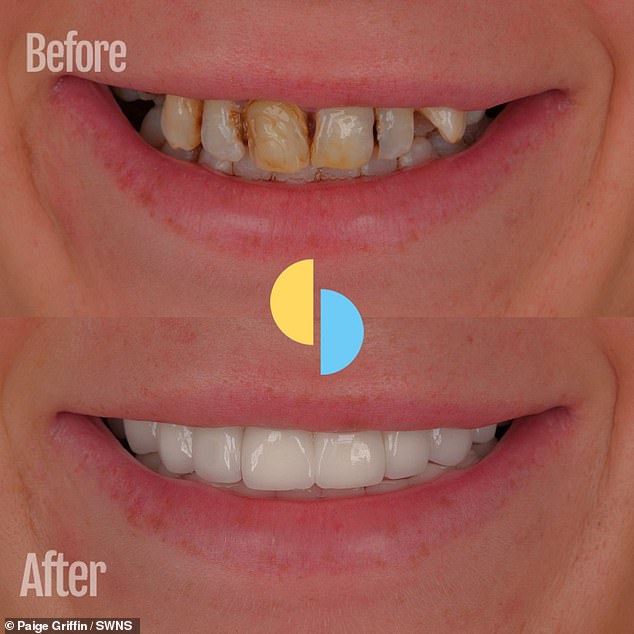 Before and after surgery, Paige’s teeth have now totally transformed after the process and the mother of one from Birmingham  says ‘I never thought I could be considered beautiful and now I am’ 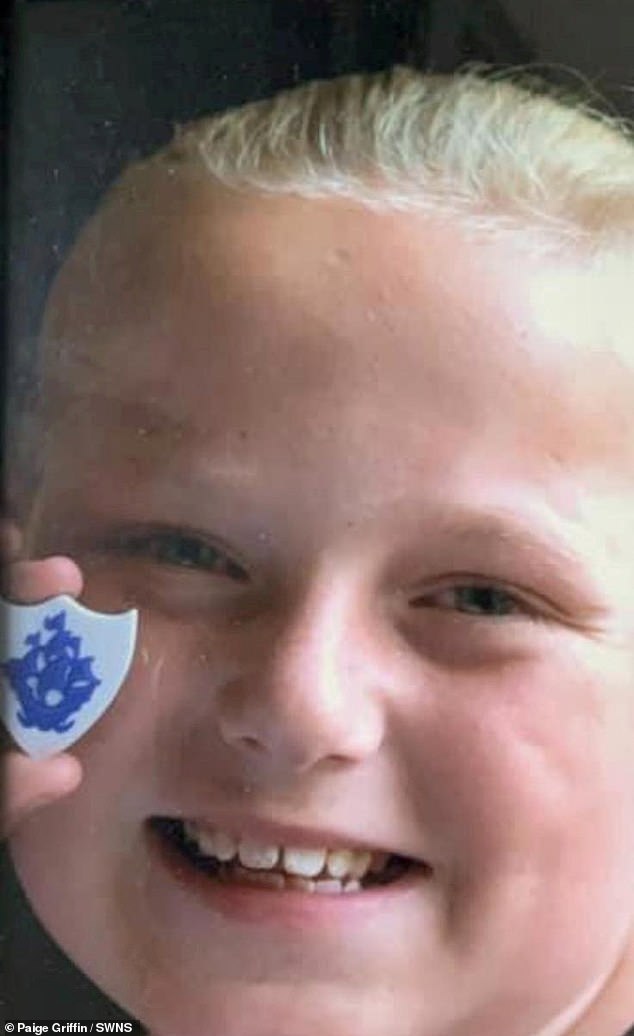 Paige, pictured as a young girl was bullied in school for the way her teeth looked and has suffered confidence issues for most of her life – until now

The mother-of-one struggled to work as a sales consultant due to fear of showing her teeth, and would never smile with her teeth on show.

She was at a loss as to what was causing the staining, as were the dentists she consulted for treatment.

Paige’s social media was bombarded with nasty comments – including, ‘yellow teeth’ and ‘wheelie bin teeth’ – but some sympathetic followers suggested she set up a GoFundMe page for dental support and Paige successfully raised £400.

A Turkish dentist saw her page and offered to fly her over to Turkey for free for dental surgery costing over £5,000. 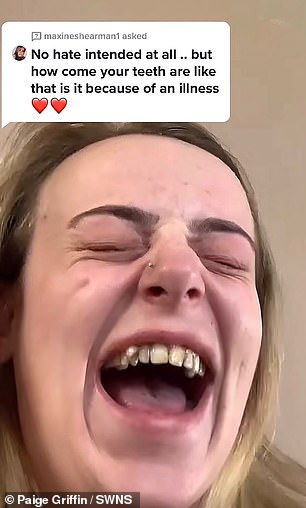 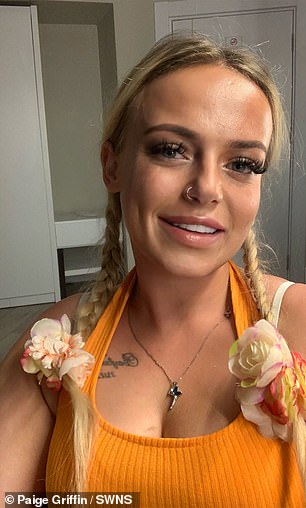 Total tooth transformation: Paige pictured before and after her dental surgery in Tukey in May of this year she couldn’t believe how ‘kind’ some people could be after she was given the procedure for free

Over the years she went to various dentists who couldn’t find a cause for her stained teeth, and the trolling followed her onto social media when she set up a TikTok page, but this led to the approach from the dentist in Turkey.

She flew over for the life-changing surgery with her partner, Rhys, 21, an ex-army officer and drainage enigneer, on May 31 – where she also had nine fillings and two teeth taken out.

The Turkish dentists informed Paige that the real cause of the stained teeth was due to gum disease, which had been neglected by Paige’s previous dentists.

She is now overjoyed with the results and said she is finally able to smile with confidence for the first time in her life.

The stay-at-home mother said: ‘I was blown away that a stranger could offer such kindness.

‘I feel like I’ve finally got my smile back. 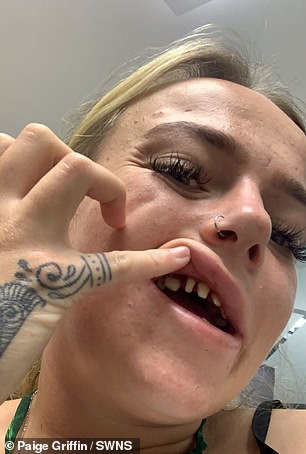 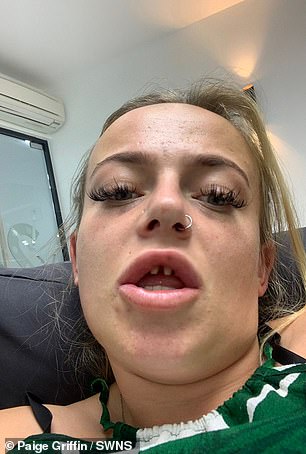 Paige during the surgery process at Smile Dental in Turkey, her natural teeth were shaved down so that the dental surgeons could place veneers on top 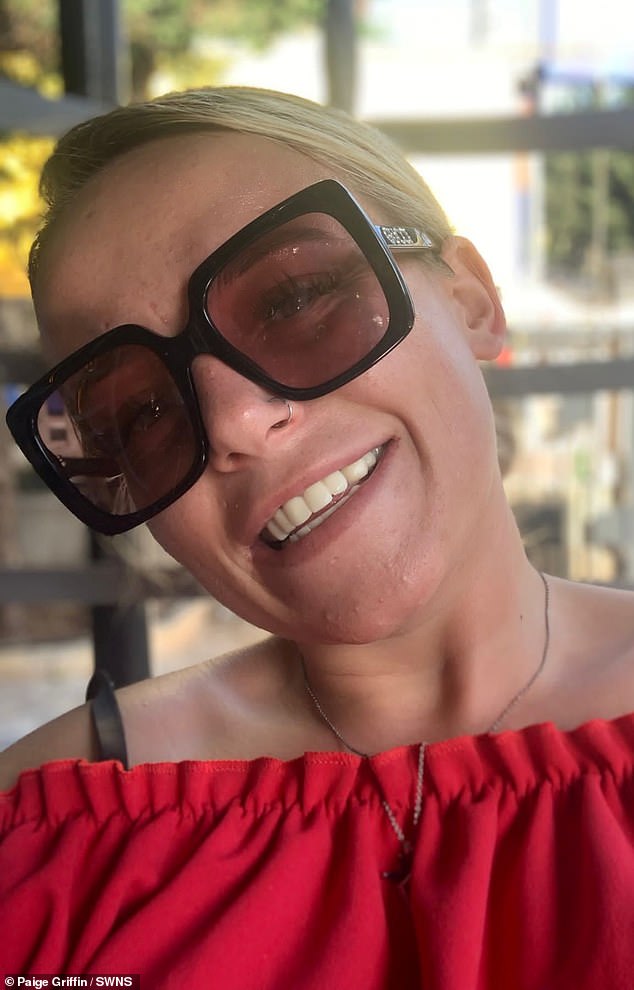 Paige returned home on June 8 and surprised her followers on TikTok live with her new smile. She said: ‘For the first time, the haters were drowned out by positive support and compliments.

‘I’ve refused to smile with my teeth on show my whole life but now I can’t stop beaming.

‘Turkey teeth’ trend leaves thousands of Britons with dead stumps, abscesses and serious dental issues: NHS paying for repairs of many who fly out for cut-price crowns and veneers fuelled by dream for perfect reality TV smile

The latest cosmetic fad, made popular by stars like Katie Price and Love Island’s Jack Fincham, involves filing down teeth to pegs then replacing them with crowns or veneers.

The procedure, which leaves patients with a Hollywood smile, is being fuelled on social media under the hashtag #Turkeyteeth which has been viewed more than 100million times.

But a recent BBC documentary has looked at the fallout, asking whether the risks really outweigh the savings on having cheaper treatment, with UK dentists warning the complications can leave patients with huge medical bills to fix shoddy work.

A number of dentists surveyed on behalf of the BBC said some of the remedial work was provided by the NHS.

Meanwhile one private clinic has urged patients to be certain they know what they are getting after being contacted by clients who had been sold veneers but given the much more aggressive option of crowns.

The Harley Street Smile Clinic in London said they had been inundated by young people suffering from severe infections, intense long lasting pain, infected gums or rotting teeth due to the procedure.

Dr Maurice Johannes, Principle Dentist at Harley Street Smile Clinic, added in a blog post: ‘I can’t stress enough that people need to be 100% clear about exactly what they are signing up for when they go abroad for cosmetic dental treatment.

‘I’ve never had a single ounce of good luck, so at first, I didn’t believe them when they reached out.

After joining Tiktok in April 2021, hate and ‘nasty comments’ about her teeth flooded her profile.

Paige said: ‘For years, people said I had wheelie bin teeth – because I had one black, one brown and one green.

‘I just wanted to be loved and liked, and my teeth prevented me from finding love and friendships.

‘I was tormented and resented myself.’

In May 2022, Paige got a message from SmileDental, a dental practice in Turkey, who offered to give her a new set of crowns and veneers for free.

SmileDental acknowledged the suffering that Paige was enduring online, and wanted to help as much as they could.

Despite being reluctant at first, thinking it was a scam, she soon felt confident to accept the offer after checking their 69.7k Instagram following and realising it was legitimate.

Paige was told the entire cost was around £5,030 and that ‘she didn’t need to worry about a thing.’

She said: ‘I never thought that I would ever be able to afford such an expensive surgery.

‘I was shocked by how much the whole procedure would’ve cost.’

In May 2022, Paige flew to Turkey with partner, Rhys, and was greeted at the airport by one of the driver or the dentist.

The TikToker said she had nine filings and two teeth extracted before the process began.

She said: ‘My teeth were filed down, and I was given veneers a day later.’

Paige returned home on June 8 and surprised her followers on TikTok live with her new smile.

She said: ‘For the first time, the haters were drowned out by positive support and compliments.

‘I never thought I could be considered ‘beautiful’ and now I am.’

After a couple of weeks back in the UK, Paige highlighted the noticeable change in her confidence.

‘I can smile at strangers in Tesco with confidence,’ she explained.

‘I can take photos and smile with my son for the first time.’

We followed up with SmileDental Turkey for a comment on their experience with Paige.

He said: ‘We had an incredible experience, so did she.

‘We strived to empathise with her.

‘The process started with a coincidence in fact, and being very parallel to our goals as an enterprise.

‘We simply wanted to be a figure in her life, a part of her wonderful smile.’