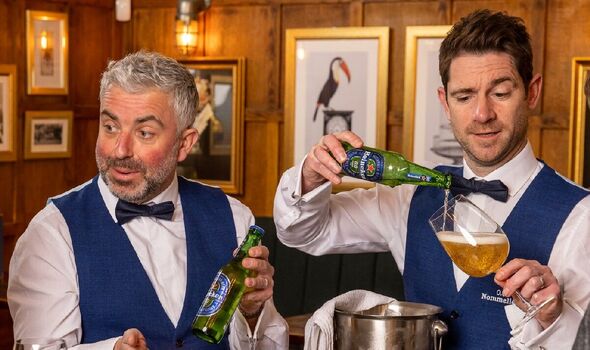 Encouraged by the undeniable improvement in both the quality and the quantity of non-alcoholic drinks in recent years, the discerning drinking duo are hosting a number of upmarket dinners in pubs across the UK, pairing each course with a low or non-alcoholic drink.

“Thankfully, expensive sugar-soaked fizzy drinks and a dreary tap water are no longer the only alternatives to a pint or a gin and tonic,” said Sandham. “Alcohol-free options are now available across a broad range of categories – from aperitifs and ales to sparkling wines, cocktails, and ciders.”

The Thinking Drinkers added that due to advancements in technology, brewers, distillers, and winemakers can now extract alcohol from their drinks without significantly sacrificing complexity or depth of flavour – a great example being the launch of Heineken 0.0 draught which followers of Coronation Street may have spotted on the bar recently at the Rovers Return.

“Low and no alcohol drinks have all the flavour characteristics capable of creating a close kinship with a wide range of cuisines and deserve their place at the pub dining table as much as their ‘alcoholic’ equivalents,” said McFarland. “If the food’s good, if the drink’s great, and if you put the two together then, well, you’ve got something rather special going on.”

The elbow-bending entertainers are currently on a UK tour with their hilarious “Pub Quiz” show during which each audience member enjoys an array of outstanding alcoholic drinks including a rum, a gin, a whisky and a beer.

But as their “Drink Less, Drink Better” mantra suggests, Sandham and McFarland are massive fans of moderation – and not just in January when it is estimated that around 9m people give up the grog entirely.

“Of all the months during which to dodge drink, depressing January isn’t the easiest,” added McFarland. “Wetter than an otter’s pocket and with all the excitement of a car park stairwell, it begins with a hangover and ends with a Tax Return – but it’s a great time to explore all the awesome no and low-alcoholic options out there.”

While it’s the more body-conscious, Instagram-obsessed younger adults that have embraced alcohol-free drinks initially, a wider drinking demographic, including those over 50, are now becoming more moderate and measured in their ‘measures’.

“Just as dogs aren’t just for Christmas, no and low alcoholic drinks aren’t just for January or indeed younger drinkers,” added Sandham. “Enjoying a drink is one of life’s great pleasures but we all need to keep an eye on our weekly units.

“Given the sheer diversity of choice now available in pubs and supermarkets, there’s no shame or stigma in, once in a while, substituting an alcoholic drink with a no or low alcoholic alternative as part of a healthier approach to drink.”

To be in the chance to win a pair of tickets to one of the Nommelier’s food pairing events, visit, https://shor.by/HeinekenNommelier.

The “Thinking Drinkers Pub Quiz” comedy tasting show is currently on a UK tour. For tour dates and tickets check out www.thinkingdrinkers.com