The tragic death of Joey Jordison has shocked Slipknot fans around the world. According to Variety, Jordison died “peacefully in his sleep,” at the age of 46, though the official cause of death has yet to be revealed publicly.

“We are heartbroken to share the news that Joey Jordison, prolific drummer, musician and artist passed away peacefully in his sleep on July 26, 2021. He was 46,” a statement from Jordison’s team read. “Joey’s death has left us with empty hearts and feelings of indescribable sorrow. To those that knew Joey, understood his quick wit, his gentle personality, giant heart and his love for all things family and music. The family of Joey have asked that friends, fans and media understandably respect our need for privacy and peace at this incredibly difficult time. The family will hold a private funeral service and asks the media and public to respect their wishes.”

Jordison was the co-founder and original drummer of Slipknot and wrote many of their songs before he left the band in 2013. Find out the real reason Jordison left Slipknot below. 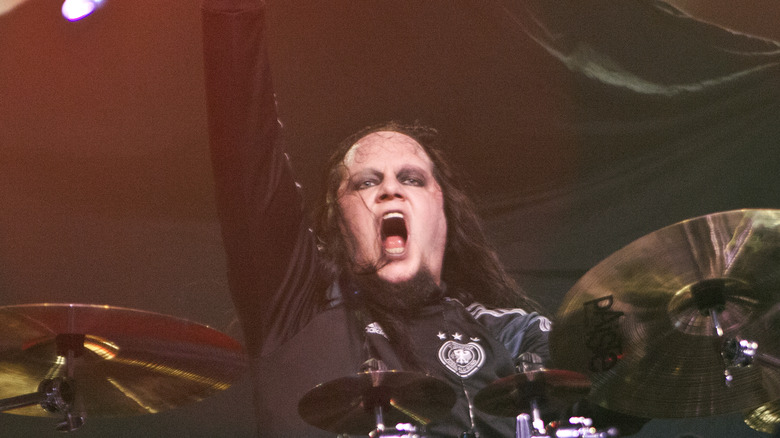 While Joey Jordison found great success with Slipknot, the band asked him to leave in 2013. Though the media speculated rumors of a rockstar rift with members like Shawn Crahan and Corey Taylor, it wasn’t the case. “When we parted with Joe it was honestly because of necessity,” Taylor told Louder in 2015. “Starting to move on without him was one of the most difficult things we’ve ever done — just as hard, in a lot of ways, as trying to move on without Paul.” (Taylor is referring to original member and bassist Paul Gray who died in 2010.)

About a year after Taylor’s interview, Jordison came clean about why he decided to leave the heavy metal band. Jordison revealed to Louder that he suffered from a nerve condition called transverse myelitis — a type of multiple sclerosis — that caused his legs to be paralyzed. “I don’t wish [the disease] on my worst enemy,” Jordison said. However, he managed to beat the disease with intense gym and therapy sessions and gave hope to others battling the same condition to do the same.

Jordison also didn’t hold any grudges against his former band, and wished them “nothing but luck and the best of praise.”

Here's, Joey, Jordison, Reall, Why
You may also like:

Wonho on His EP 'Blue Letter': 'Whenever I See WENEE, I See the Color Blue'