Annabel Crabb’s Ms Represented, a four-part series about women in government, certainly earns points for perfect timing. The treatment of women, in our society in general and in the workplace in particular, has been a dominant area of discussion in recent times. Scrutiny has been applied to a number of industries and professions, and revelations of unacceptable behaviour have emerged at all levels, from casual workers in the gig economy, through to the hospitality industry and the elite ranks of the legal and medical professions. Since rape allegations by Brittany Higgins became public in February last year, attention has also focused on the “Canberra bubble” and the culture that permeates Parliament House. 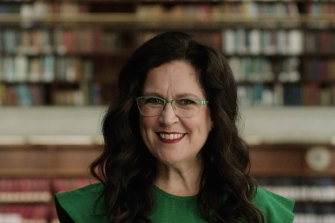 Now comes the view from an array of women who have held some of the most powerful positions in the country. And it’s not a pretty picture. Ms Represented (Tuesdays, ABC, 8pm and iView) presents candid contributions from women who are working, or have worked, at the highest levels of government. It’s a lively account featuring participants from across the political spectrum: Liberal and Labor, Greens and Democrats. Among the currently serving participants are Penny Wong, Marise Payne, Sarah Hanson-Young, Anne Aly and Linda Burney. Among the former parliamentarians are former prime minister Julia Gillard, deputy Liberal Party leader Julie Bishop, Amanda Vanstone, Bronwyn Bishop, Ros Kelly, Natasha Stott-Despoja, Kate Sullivan, Judith Troeth, Cheryl Kernot, Emma Husar, Julia Banks, Nova Peris and Carmen Lawrence.

The notable absences amid the all-female line-up of contributors are Attorney-General Michaelia Cash and opposition spokeswoman on education and women Tanya Plibersek, as well as high-profile senators Pauline Hansen and Jacqui Lambie. Representatives of the National Party, or the former Country Party, are also missing.

Nevertheless, an animated assortment of opinions and anecdotes adequately fills the half-hour episodes and there’s little sense that anything significant might be lacking. 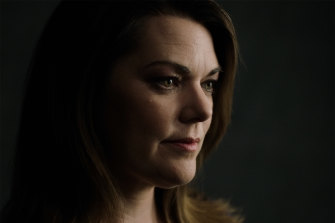 Sarah Hanson-Young recounts the attack that led to her successful defamation case against David Leyonhjelm.Credit:ABC

The series presents a history of Australian women’s involvement in politics, focusing primarily on the federal government. The opening episode, Getting There, looks at the routes taken through pre-selection and election, and then at what the women encountered once they progressed to taking an uncomfortable seat in an inadequately heated building designed for men in suits.

The second, Being There, reveals the struggle to be heard and to stop the objectionable behaviour of some colleagues, as well as addressing the difficult dilemma about whether to stay silent or to call out abusive behaviour.

Dedicated to “giants of the Senate” Margaret Guilfoyle and Susan Ryan, the third episode, In the Room, focuses on the 1970s and ’80s and examines issues of motherhood, childcare and abortion. The final episode, The Numbers Game, chronicles Labor’s adoption of affirmative action targets and the Liberals’ resistance to quotas, as well as featuring an illuminating discussion about the use of the word “merit”.

The tone adopted by writer and presenter Crabb and director Stamatia Maroupas through the series is generally upbeat, and it’s a mode that suits Crabb’s natural vivacity. Strategically, it’s also understandable: Ms Represented doesn’t want to risk being dismissed as earnest, indignant or scolding. 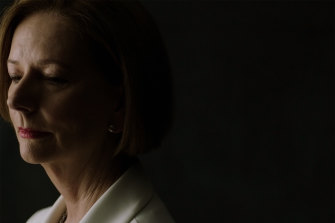 So when it comes to the revelation about, Edith Cowan, Australia’s first female member of parliament, having to rush home from Perth’s Parliament House when she needed a bathroom break because the building didn’t offer toilet facilities for women, the map of her trip is intercut with clips of comic actor Buster Keaton running wildly down a street. And the series’ theme music sounds weirdly like the one for Succession, suggesting high-stakes drama and nasty power plays.

While each chapter offers illuminating insights delivered with wry smiles more than angry accusations, the powerful standout is the second episode. It moves from an examination of invisibility, the struggle for the women’s voices to be heard, against what Bishop describes as “gender deafness”, to the vicious and shameful treatment suffered by Gillard and Hanson-Young.

One of the series’ accomplishments is its graphic and nuanced illustration of the seemingly impossible dilemma faced by female politicians. If they call out the sexist slurs, slam the slut-shaming or refute the gossip about their sex lives, they risk being defined by those issues rather than by their policies. They also risk being branded as shrill, hysterical and unduly sensitive, too emotional for this job, girlie.

Yet if they stay silent, the reprehensible behaviour continues unchallenged. Specifically addressed are the attacks on Gillard, including the rally where then opposition leader Tony Abbott fronted a crowd waving Ditch the Witch placards. Hanson-Young recounts the bullying by some of her Senate colleagues, whom she eventually named in parliament, and the attack that led to her successful defamation case against David Leyonhjelm. While she maintains her composure when describing the unconscionable treatment, she’s clearly still affected by it.

In keeping with the tone throughout, the series closes with sentiments that are optimistic, with Hanson-Young urging the next generation of women to choose political careers and to continue the campaign to change an entrenched and sometimes toxic culture. “Here’s the ladder,” she says with “happy tears” in her eyes and a quaver in her voice. “Come on up.”

But alongside that, Gillard’s second episode parting line rings regrettably true, for the country and the women that we elect to represent us: “We are entitled to a better standard than this.”

Find out the next TV shows, streaming series and movies to add to your must-sees. Sign up to get it every Thursday.

for, Perfect, points, timing, With
You may also like: