Can you imagine Elvis Presley playing Meat Loaf’s Rocky Horror Picture Show character Eddie? We can’t either, yet the producers initially wanted the King badly. When they realized they couldn’t get Elvis, they told Meat Loaf to act like him. However, the “Paradise on the Dashboard Light” singer felt weird about acting like his hero.

According to IMDb, Meat Loaf once admitted that Rocky Horror Picture Show‘s producers initially wanted Elvis Presley to play his character, Eddie. Apparently, Elvis even showed some interest in taking the role.

However, it didn’t work out, and the studio got Meat Loaf instead. In 1973, the singer debuted as Eddie and Dr. Everett Scott in the stage production of Rocky Horror Picture Show. The producers didn’t let go of the Elvis thing, though. They wanted Meat Loaf to do Eddie with an Elvis impersonation. Meat Loaf wasn’t overly impressed by the idea.

Meat Loaf eventually exchanged some words about it with the King himself when the “Blue Suede Shoes” singer showed up to the stage production one night.

“He came to see Rocky Horror and everyone else who had played Eddie over in England had tried to do an Elvis impersonation,” Meat Loaf said (per What Culture). “That’s what they said to me when we started doing it out in L.A., but I looked at them and go, ‘Why would you want an Elvis impersonation? Why wouldn’t you want Eddie to be his own human being?’

“They go, ‘Well, okay,’ and that’s what Elvis talked to me about. He goes, ‘Well, I hear everyone wants to do an Elvis impersonation but you didn’t.’ The one thing I did say to him was, ‘No, because there’s only one you and only one me.’ That’s all I said to him.”

Meat Loaf might have hated doing an Elvis impersonation, but Eddie did have an Elvis vibe in the film production. 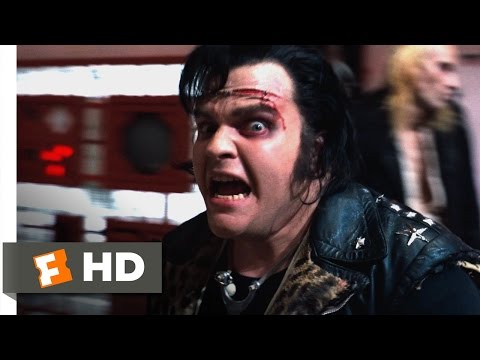 IMDb cites that Rocky Horror Picture Show writer Richard O’Brien originally wanted to play Eddie. When he was writing the stage play, O’Brien actually envisioned himself playing the character, mostly because of the character’s short scenes.

O’Brien didn’t want to be an actor and wanted the smallest part. However, the play’s director felt he would better fit Riff Raff.

“I was really nervous about the whole thing,” O’Brien said in Making The Rocky Horror Picture Show. “All I wanted to do was play Eddie, pop out of a Coke machine, sing a rock and roll song, and pop back into the Coke machine. But I respected Jim and since he felt I should play Riffraff I had to go along with him.”

It was meant to be because O’Brien was an excellent Riff Raff and Meat Loaf was a great Eddie.

However, many things weren’t meant to be on the film’s production, though. Writer and director Jim Sharman didn’t accept an offer from Twentieth Century Fox for a larger budget and a longer shooting schedule. The studio wanted him to cast famous rock stars like Mick Jagger (who wanted to playDr. Frank-N-Furter), David Bowie, Lou Reed, and Cher. Sharman felt they should keep most of the actors who starred in the stage production, so he declined the offer. 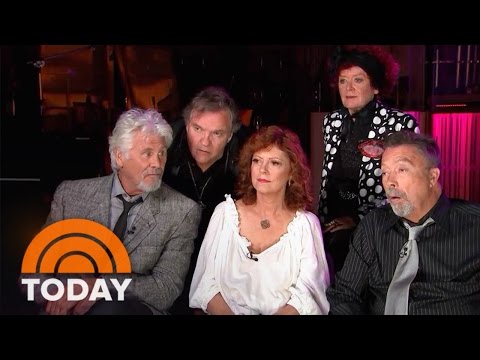 When they cast Meat Loaf in the stage production, O’Brien was concerned that he wouldn’t be able to sing the character’s big song, “Hot Patootie – Bless My Soul.”

O’Brien handed the music to Meat Loaf and said, “It’s okay to flub a few lines. No one in the London cast has ever sung the whole thing correctly anyway.” When Meat Loaf saw the lyrics, he said, “What’s the problem?” He sang the song perfectly on stage and film.

However, there were a couple of accidents on set during Eddie’s motorcycle scene. According to Meat Loaf, his stuntman drove the motorcycle up and down narrow ramps through the scene. The bike fell off one of the ramps and pinned the stuntman underneath.

Meat Loaf lifted the bike off of him, and thankfully he was OK. IMDb wrote that to get shots of Meat Loaf riding the bike up and down the ramps, “the crew rigged a wheelchair that would hold a set of handlebars and a motorcycle windshield in front of a camera as the crew pulled it up and down the steps.”

“In the middle of shooting, the wheelchair hit a ridge at the bottom of the steps, sending him flying towards the floor and shattering the camera and the windshield. His stuntman tried to catch him, but the ramp caught the stuntman’s leg and caused a serious fracture.”

Meat Loaf got a deep cut on his head too. Still, the singer didn’t stop performing or acting. He later starred in Fight Club, Wayne’s World, and more. However, we’ll never forget him as Eddie.