Greenpeace activists have built a new underwater ‘boulder barrier’ in a protected area of the English Channel to stop a hugely harmful fishing practice.

In total 18 boulders, each weighing about three tonnes and carrying the name of a celebrity endorser, were dropped this week from the Greenpeace ship Esperanza in the Offshore Brighton marine protected area (MPA).

Collectively the boulders have closed off nearly 55 square nautical miles of Offshore Brighton MPA – one fifth of the site’s total area – from bottom trawling.

The contentious fishing practice – which Greenpeace equates to driving a bulldozer across national parks on land – involves heavy nets being dragged across seabeds to collect fish and shellfish.

It’s highly destructive to the marine environment as it ploughs up the landscape and destroys protected seabed habitats, while releasing carbon to the water.

Greenpeace is urging the UK government to ban bottom trawlers and supertrawlers from fishing in all of the UK’s MPAs. 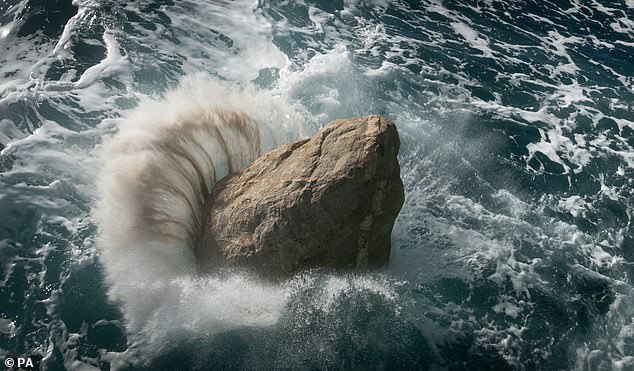 The gravel and rock seabed of the Offshore Brighton MPA, which is about 28 miles (45 km) south of Selsey Bill, West Sussex, is home to wildlife like starfish, hermit crabs and anemones and is a rich hunting ground for skates, rays and other fish.

The boulders released this week form an underwater barrier as any bottom trawlers trying to fish over them will get their gear snagged and ruined on the rocks. 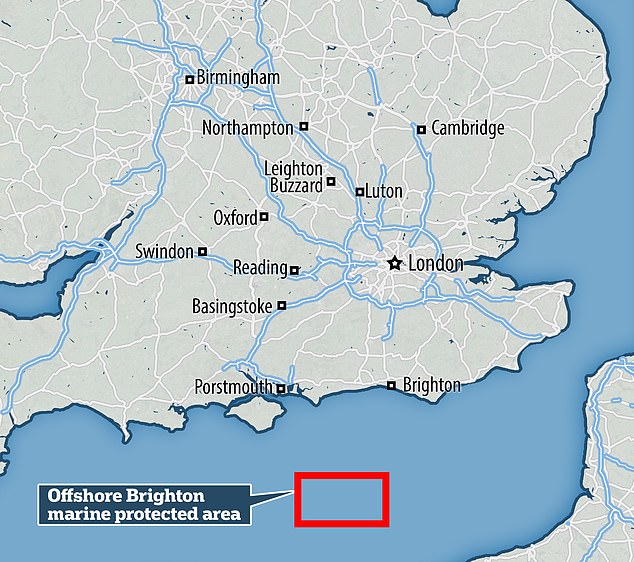 The new boulder barrier is in the Offshore Brighton marine protected area (MPA) marked it red. It’s about 45 kilometres off the coast of Sussex, right on the border between UK and French waters.

Offshore Brighton was established in 2016 to protect its seabed habitat, but it’s ‘being destroyed’ by bottom trawling, Greenpeace says.

‘Offshore Brighton is the perfect monument to our government’s failure to protect our seas,’ said Chris Thorne, an oceans campaigner at Greenpeace UK, speaking from on board Esperanza.

‘It exists specifically to protect the seabed, but bottom trawlers spend thousands of hours each year ploughing this sensitive habitat.’ 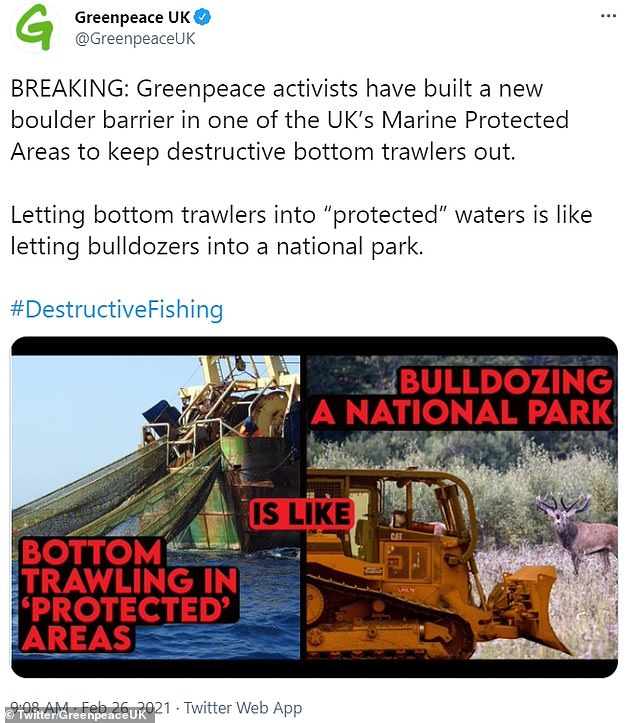 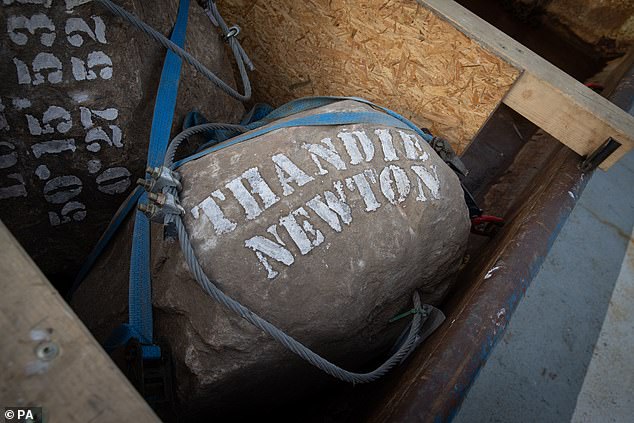 A boulder bearing the name of British actress Thandie Newton, who is one of the supporters of the campaign 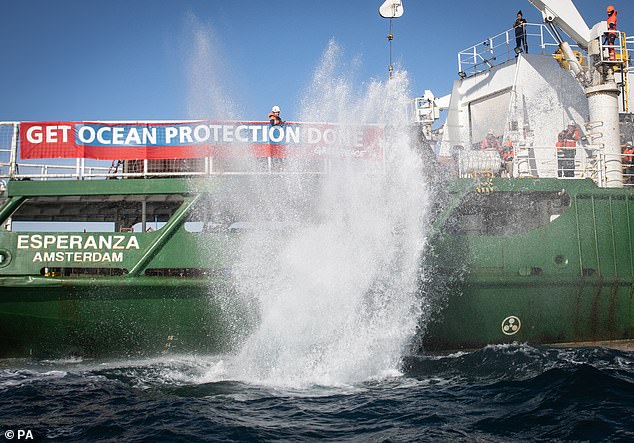 The environmental group says bottom trawling, in which heavy weighted nets are dragged over the seabed to catch fish, is ploughing up the sensitive seabed habitat for which the area is protected. Pictured, boulder dropped from Esperanza on Tuesday

Greenpeace told MailOnline that each boulder dropped this week varied in terms of size and weight but on average were about three tonnes each, meaning the total equates to about 55 tonnes.

Most were dropped on Tuesday and the final lot on Thursday, following adverse weather on Wednesday.

Greenpeace said it informed relevant marine authorities of the location of each boulder – which are only preventing bottom trawling in part of the protected area – to ensure navigational safety for other seafarers.

Greenpeace also commissioned an independent scientific agency, BioLaGu, to conduct a Natura 2000 Environmental Impact Assessment to determine the impact of this activity.

Greenpeace said: ‘The assessment concluded the activity would not have a significant impact on the protected features of Offshore Brighton.’

Celebrities including actress Thandie Newton, cook Hugh Fearnley-Whittingstall, singer Paloma Faith, actor Mark Rylance, Pulp’s Jarvis Cocker and explorer Ranulph Fiennes had their their name printed on a boulder each as an endorsement. 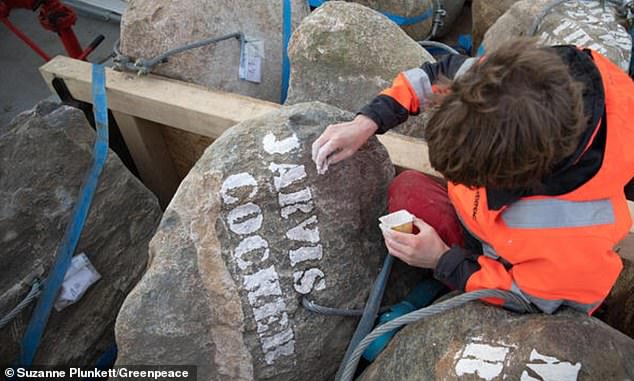 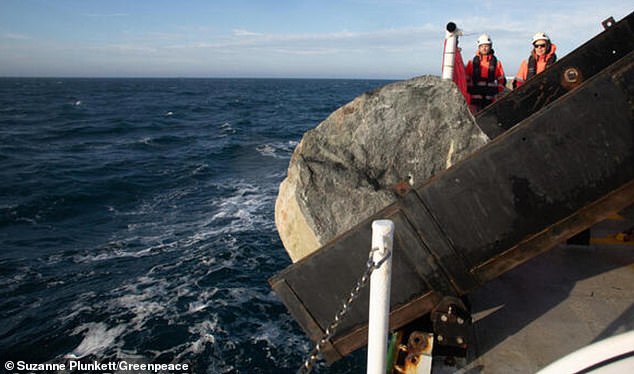 A boulder falls into the English Channel from the vessel. Greenpeace is urging the UK government to ban bottom trawlers and supertrawlers from fishing in all of the UK’s marine protected areas

Fearnley-Whittingstall, known for his TV series River Cottage and campaigns against single-use plastics, said he was proud to put his name on one of the boulders.

‘This action will play a small but significant role – and far more than our government has so far done – to actually protect Offshore Brighton in a pragmatic and effective way,’ he said.

‘However, this shouldn’t be necessary. Our fervent hope is that our government will now turn words into action, paper parks into real conservation, and properly protect our oceans.’ 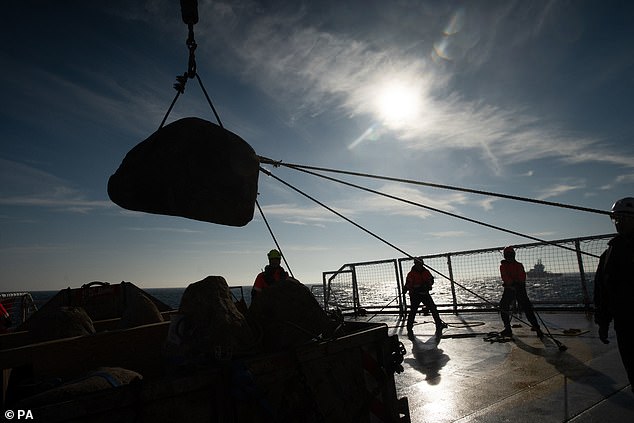 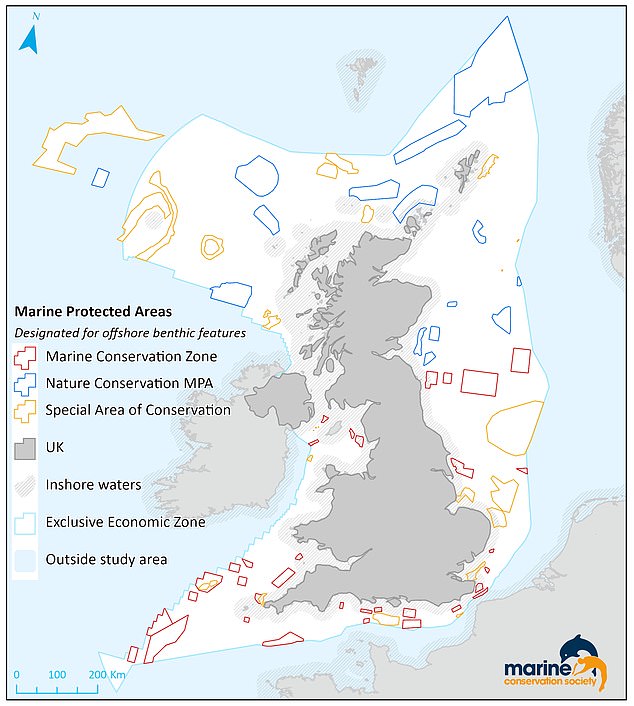 Harmful bottom trawling is occurring in 98 per cent of protected areas located in UK waters, Marine Conservation Society revealed in January. Its report found all but one of the offshore marine protected areas (MPAs) was dredged between 2015 and 2018. Pictured, all the conservation areas in UK waters. Offshore Brighton MPA is the red southernmost rectangle southeast of the Isle of Wight

Back in September, Greenpeace dropped boulders in the North Sea to stop trawlers in the Dogger Bank conservation area.

This move had been made easier after Brexit as it no longer required agreement from other EU member states.

Greepeace said in a statement: ‘The government taking steps to restrict bottom trawling in a handful of protected areas demonstrates some political will, following Brexit, to properly protect the UK’s offshore waters.’

However, Greenpeace said the government’s ‘piecemeal approach’ would still leave 97 per cent of UK offshore protected areas – 74 out of 76 – fully or partially open to bottom trawling. 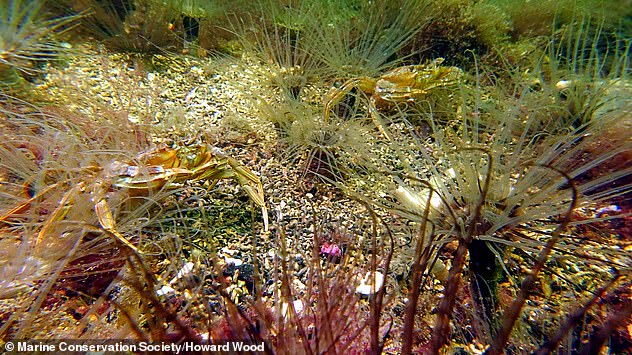 The contentious fishing practice sees heavy nets dragged across seabeds to collect fish and shellfish and is highly destructive to the marine environment. Pictured, the same area of the South Arran MPA after protection measures were put in place 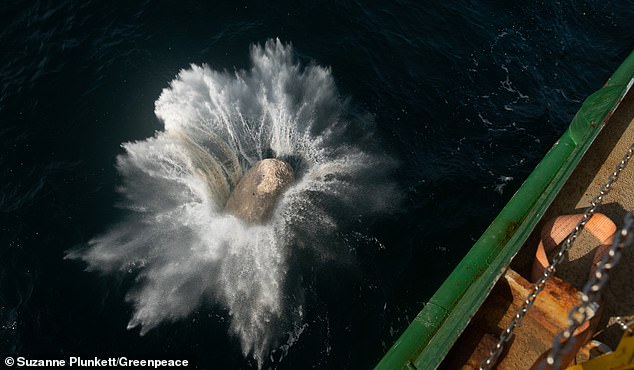 ‘The government’s move to properly protect just two of the UK’s protected areas barely touches the tip of the iceberg in terms of what is needed to save our oceans,’ he said.

‘All of the UK’s protected areas need real protection, not just a handful.

‘This government is supposed to be showing global leadership on ocean conservation and fighting for 30 per cent of the world’s oceans to be protected, but it can’t even properly protect 30 per cent of our own waters.’

Thorne said the government’s move to stop bottom trawling in the Dogger Bank ‘proves the UK government can stop destructive industrial fishing if it wants to’.

The goal is to preserve marine habitats and wildlife at sea from overfishing or destructive practices that could risk wiping out species.

In the UK these areas create a chain of protection around the coast covering an area that is twice the size of England.

According to the Marine Conservation Society, MPAs are areas of sea that are set up to look after particular seascapes, habitats and species, just like nature reserves and national parks on land.

They help in the protection and recovery of rare and vulnerable wildlife, which would otherwise be threatened with extinction or serious decline.

MPAs also provide places for fish and other marine life to flourish, contributing to a more productive system both inside and outside of their boundaries.

There are 91 zones in waters around England alone and hte first were designated in 2013 – known as the UK Blue Belt.

There are limits on how strict restrictions can be due to the UK being part of the EU Common Fisheries Policy.