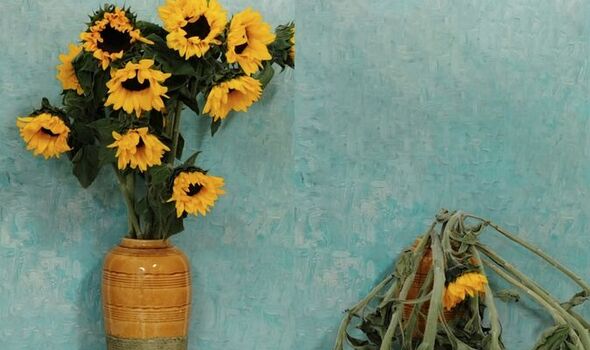 Perchloroethylene, or PERC, is a colourless liquid used as a solvent for dry cleaning since the 1950’s but has been classed as a human carcinogen by the World Health Organisation’s cancer experts.

PERC is still used daily in the UK, despite being banned recently in California, France and Denmark – with the main risk coming not from wearing clothes cleaned with it but instead exposure through air, water or soil.

Yet despite studies showing that living near a PERC-using dry cleaner boosts your risk of kidney cancer, green-tech company Oxwash found 84 percent of Britons have no clue about its health implications.

Oxwash shows the effects of PERC on flowers

So ex-NASA scientist and Oxwash founder Dr Kyle Grant created a live experiment to show the danger of PERC by adding some to water in vases that were arranged like Dutch artist Van Gogh’s Sunflowers painting.

The time-lapse videos show the devastating effect PERC has – as the vibrant yellow blooms began to show signs of attack in a matter of hours, compared to a vase of flowers fed by tap water.

Involving a pair of identical floral arrangements – based on the Dutch artist’s widely-acclaimed Sunflowers – they were put in identical conditions for four days, receiving the same amount of light and liquid.

The arrangement polluted with the likely carcinogenic solvent started to show noticeable signs of struggle after just two hours 45 minutes and became lifeless after one day, 23 hours and 55 minutes – yet the tap water vase flowers only started wilting after 12 hours.

The experiment was commissioned after the new study uncovered that up to 2.26 million litres of the liquid gets used in the UK each year – accounting for up to 85 percent of all dry cleaning fluids used by UK dry cleaners.

Oxwash uses an innovative technique called WET cleaning – a sustainable alternative to ‘dry cleaning’ that uses biodegradable detergents rather than the carcinogenic solvents.

To show its benefit Dr Grant created two floral arrangements that resembled Van Gogh’s Irises and filled one with PERC-added water and the other with water boasting some of his non-toxic ‘wet-cleaning’ solution.

In just three hours, the Irises in the PERC showed signs of struggle and died in 17 hours – whereas those in the eco-friendlier wet cleaning vase took three days before even drooping.

Www.Oxwash.com CEO Dr Grant said: “Ecologically, there are no perks of using PERC in dry cleaning.

“Health and safety concerns around the solvent-based cleaner started to emerge as far back as the 1970s, and yet we are still using it here in the UK, despite there being easy alternative switches out there to launder our delicates.

“Many Britons have no idea the way they clean their clothes could be carcinogenic and harmful to the environment.”