SPIRITS are high on the Marella Explorer and I’m not just talking about the cocktails being quaffed in the Indigo Bar on Deck 12.

After 15 months of lockdowns and cancellations, just under 1,000 cruise fans  — half the ship’s capacity, because that’s all the UK government allows — set off from Southampton to sail the south coast. 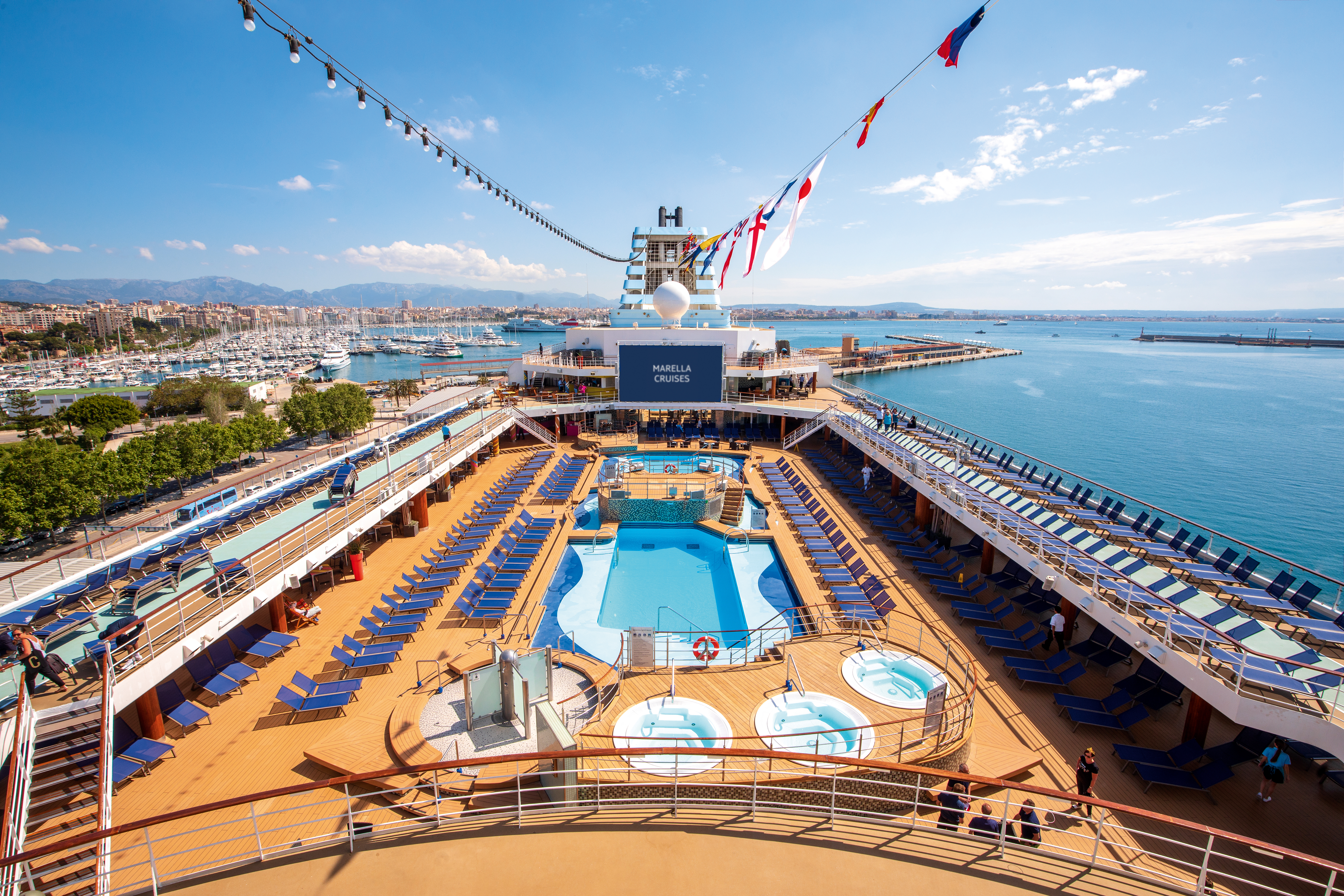 It’s Marella Cruises’ first sailing since Covid shut down shipping in March 2020, and the first of special summer season staycation cruises around the UK on Explorer.

Most are seven nights but ours is just a weekend, and not the world’s most exotic itinerary — a day each in Dover and Portland before the journey’s end back in Southampton — but that doesn’t dim the excited chit-chat on the coach as we head from the car park to the terminal.

“How else would we be able to see Dover and Portland,” the man behind me jokes. He’s come up from Torbay, where, for months, he has seen Marella Explorer anchored in the bay, and is thrilled to be on her first UK cruise. 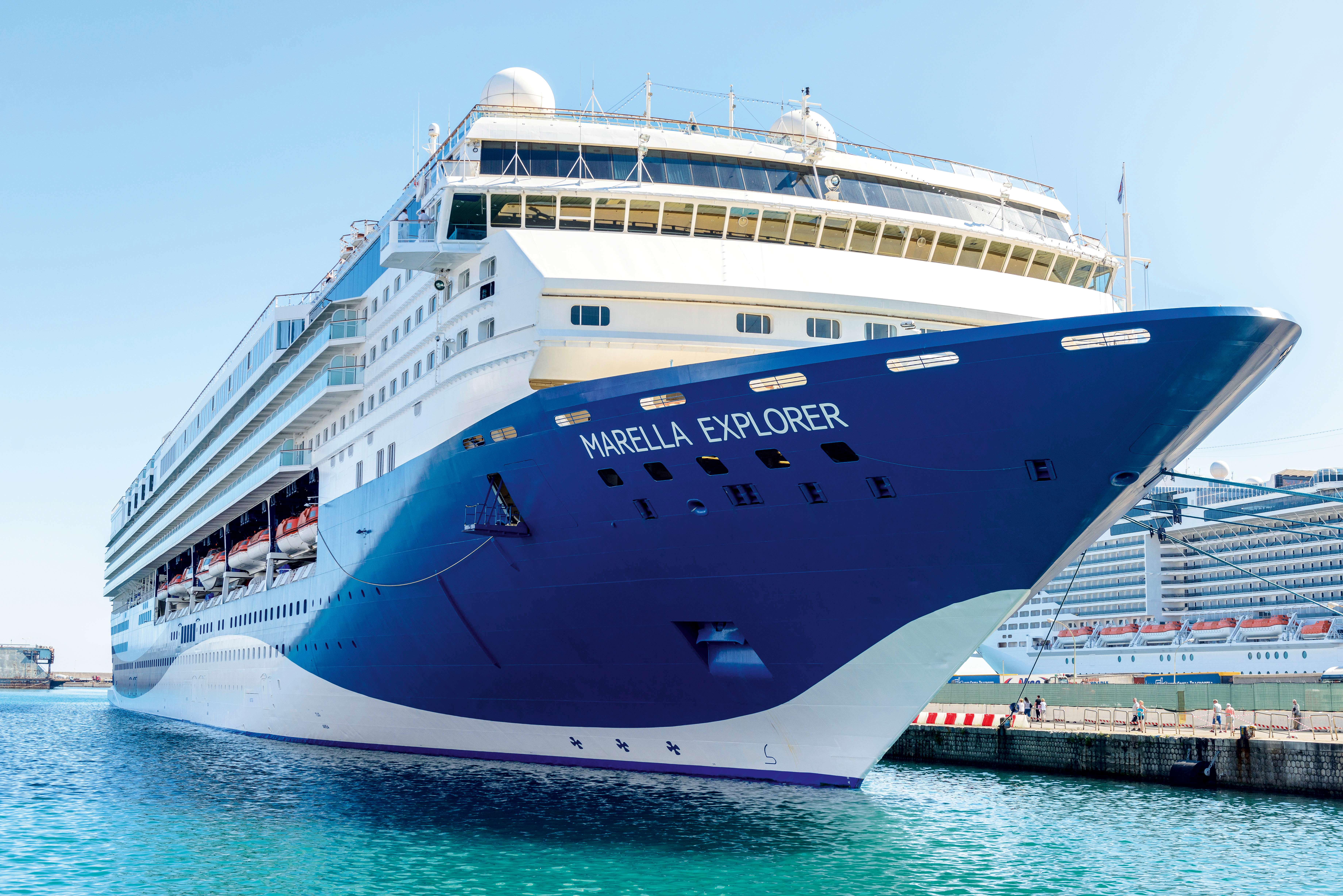 Joining a ship used to be simple. You checked-in, had a cheesy picture taken with a palm tree in the background and headed up the gangway to be greeted by the crew.

Covid has changed that. Marella requires all those over 18 to show proof of two jabs (good news for families — under-18s can get by with a negative lateral flow test) and we must queue outside the terminal until our vaccine status is checked.

Inside, we are directed to a booth for a swab test. If we fail, it’s game over. We pass. Phew. An hour and a half after arriving in the terminal, we finally step on board.

The crew are still waiting to greet us,  beaming behind their masks. As are we. They have to be worn when we are walking around inside the ship but can come off when seated, eating and drinking. 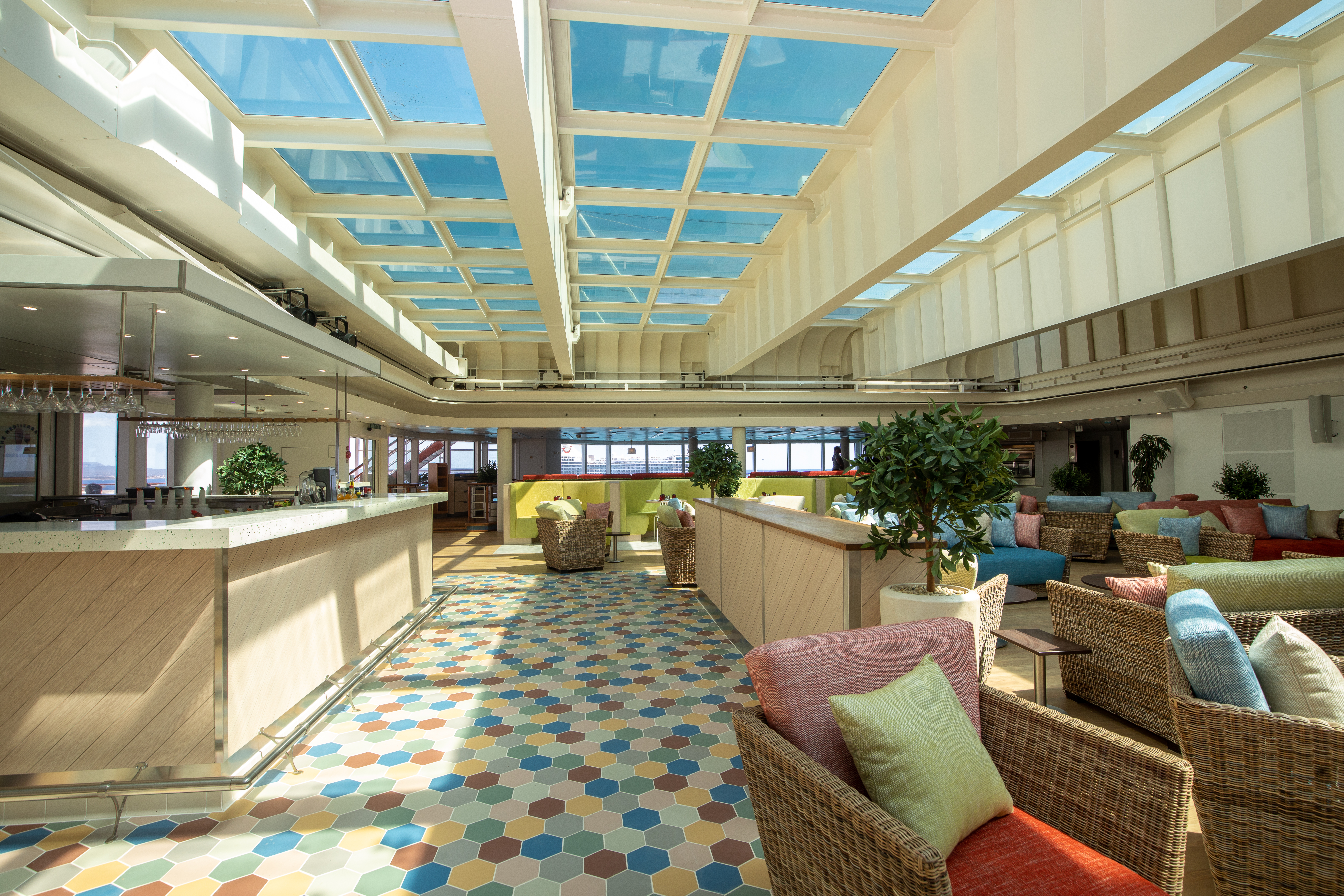 It’s the best excuse ever for another glass of wine (as is the fact it is included on a Marella cruise). Hands, face, space is a constant mantra on board. To help us comply, there are sanitiser machines everywhere, one-way systems and dancing is banned in the nightclub.

In the self-service buffet, you are allocated a table and crew dole the food onto your plate. It’s more civilised but slow as they’re still getting to grips with the new system.

Marella Explorer has a fine pedigree, starting life with Celebrity Cruises in 1996, doing a stint for Germany’s TUI Cruises and joining Marella in 2018.

She has so many places to eat,  serving everything from swanky French favourites to spicy curries and Spanish tapas, that our weekend jaunt is too short to try them all. 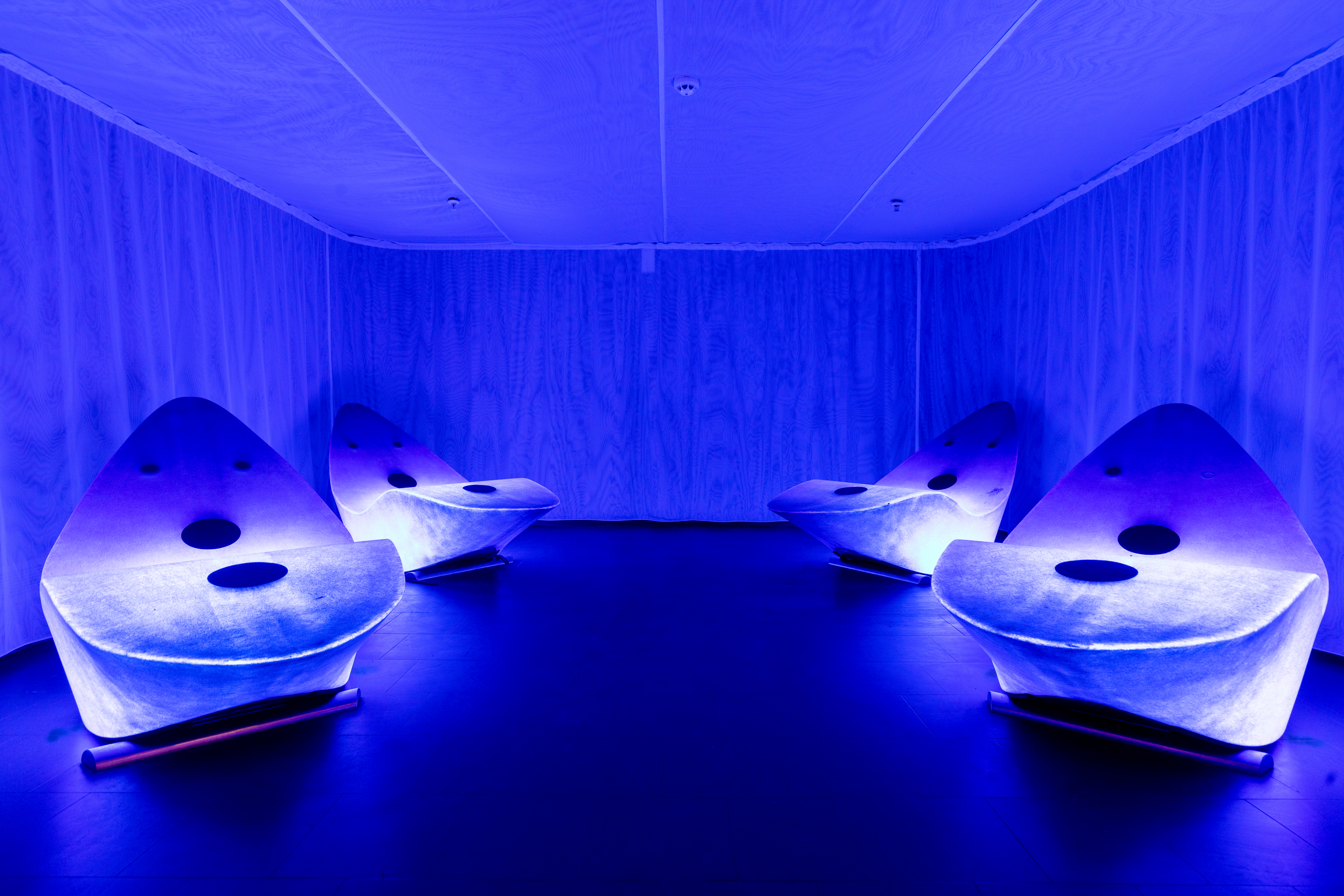 We do our best. We’ve booked tables in three restaurants, and love the food and attentive service, but social-distancing rules — like eateries on land, they have to run at half capacity — puts a dampener on the ambience.

With the ship half-full, a lot of the lounges are empty. Turns out the Squid & Anchor pub is the place to be, especially when live bands are playing and the footie is on. But with chairs blocked off and no one allowed to stand, even with masks on, it fills fast. We move on to Bar 53, a pre-dinner drinks favourite with spaced-out chairs and a piano man playing most evenings.

Dover day dawns sunny — perfect for catching a few rays on deck, which is lucky as we haven’t booked an excursion and are not allowed ashore alone. From Portland, we go to Abbotsbury, a pretty Dorset village with a superb botanical garden and swannery that’s home to more than 800 birds.

Frankie, our guide, spells out the dos and don’ts, which in a nutshell are that masks must be worn on the coach and we’re not to stray from our bubble. 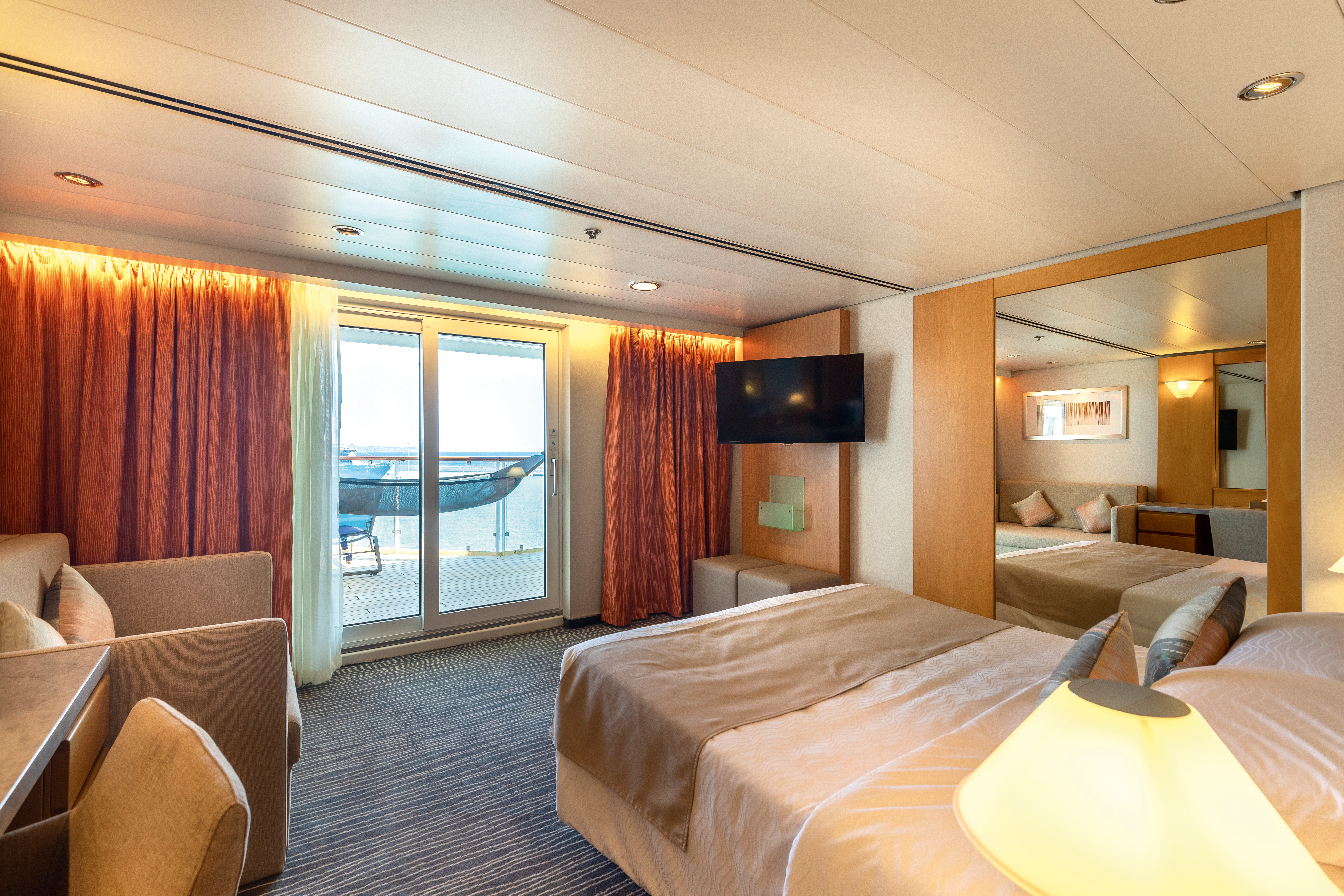 That means no shopping, no hugging passing strangers and no going to the toilet alone. No joke. We will be escorted to the loo so we can’t sneak off, although we will be allowed to do the business on our own. Well that’s a relief!

Cruising in the Covid era may be different but there’s no doubting the value it offers compared to a similar experience on land.

As the restrictions continue to be eased, let’s hope the summer seacation cruises can come into their own, offering top food, drink and entertainment at a staycation-busting price.

coa, cruise, South:, the, UKs
You may also like: