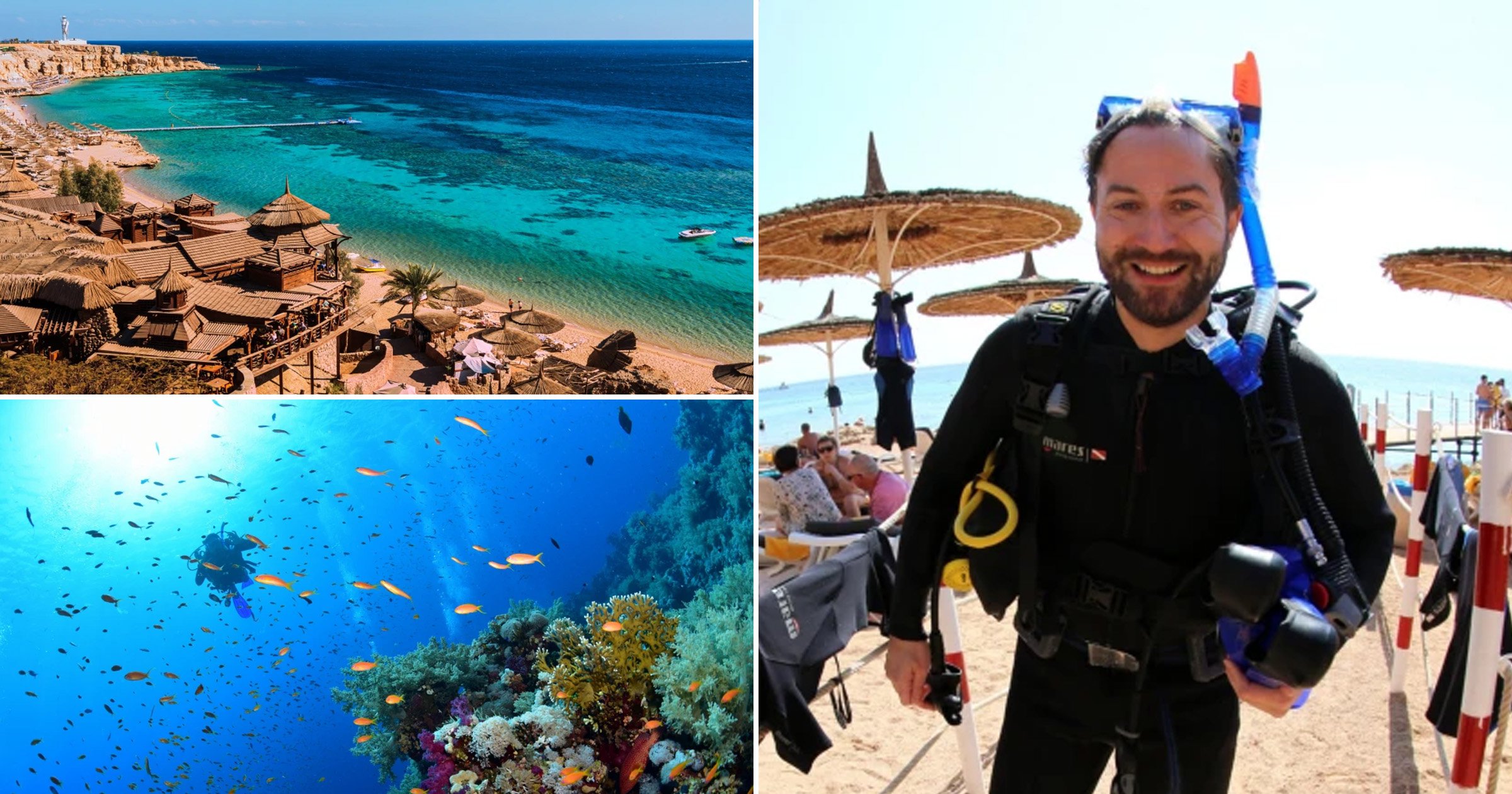 It’s not been an easy few years for Egypt.

First, tourism was decimated after a terrorist attack brought down a Russian plane in the Sinai desert in 2015 (leading to a flight ban from the UK to the Red Sea resort of Sharm El-Sheikh until 2019) and secondly, well, the pandemic.

This saw the country languishing on our red list until last month.

Not only that, but the Foreign Office has just removed its advice against all travel here, and Tui resumes its direct flights from the UK in mid-November.

Perfect timing, then, for anyone who wants not only some winter sun, but, in my case, to learn to scuba dive.

I’m staying at the all-inclusive Reef Oasis Blue Bay Resort, which has its own onsite dive centre, but my journey to getting my Open Water Diver certification with PADI Travel began two weeks earlier in a swimming pool in Chiswick, west London, with five hours of training, followed by about ten hours of online homework with the London School of Diving (from £299).

PADI has certified 28million divers and Sharm el-Sheikh, with its 30 or so dive sites, is one of the most popular places to learn.

On the first morning I meet my instructor, Negm, who tells me the Red Sea is ideal for learning. ‘The gentle currents and the combination of visibility, coral and fish you can see is excellent’, he says.

Straight away, he’s proved right when, on my first dive, I see a six-foot moray eel, a huge napoleon fish and hundreds of other eye-catching fish and coral.

It takes just two days and four dives to get qualified and I head out for a full day’s boat trip in Ras Mohammed National Park, which has nine dive sites.

The sensation of scuba diving is hard to explain – it’s both incredibly unnatural, because you’re breathing from a tank under the sea but also, somehow, the most
natural thing in the world.

At one point, while doing a drift dive (where you let the current take you) at Yolanda Reef, I’m 20m below, being carried past what looks like an underwater mountainside of orange and purple coral.

I look down and see, another 30m below me, the outline of a shark sliding through the dark blue. I always thought I’d panic on seeing a shark, but we all just point and grin.

Later, back on the boat, with the desert mountains shimmering in the distance, our group has an argument about whether it actually was a shark (people far more experienced than me claim it was just a large fish. They’re wrong, obviously).

Negm, meanwhile, tells us that the past few quiet years have actually been good for the reefs here, and for the sealife.

He mentions a number of international eco-initiatives, including Green Fins and Project Aware, which have launched to protect the reefs and ensure the future of diving here.

In 2020, South Sinai, which includes Sharm and the nearby diving hotspot of Dahab, was also among the first places in Egypt to ban single-use plastics.

After returning to dry land, I spend much of my time lounging around one of the – count ’em – seven pools or on the private beach, or eating at one of six restaurants and, at one point, going to the spa to have a slightly punishing massage.

Why fly and flop is such a shameful holiday concept, I’ll never know. I venture out just twice – once to see Sharm’s beautiful mosque and to scoff a giant mixed lamb and chicken grill at El Masrien (£8), and another evening to go to nearby Naama Bay for some spectacular king prawns at Pomodoro (£17).

In truth, Sharm is a resort in the desert surrounded by a massive metal security fence – if you want temples, museums and ancient history, you’re better off in Cairo, Luxor or Aswan.

That’s not to say it feels soulless. Over the course of a week here I’m asked a dozen times where I’m from. When I say the UK, eyes light up, my hand gets shaken and I’m told ‘Welcome back’.

British visitors used to account for 40% of business here – with all that’s on offer, let’s hope it returns to similar numbers soon.